How to make vegan gyro meat (also gluten-free and soy-free!) with a tasty combination of mushrooms, aromatics, and homemade seasoning. Once cooked, serve up the tasty vegan gyros with salad vegetables, and homemade tzatziki, all wrapped up in pita bread! 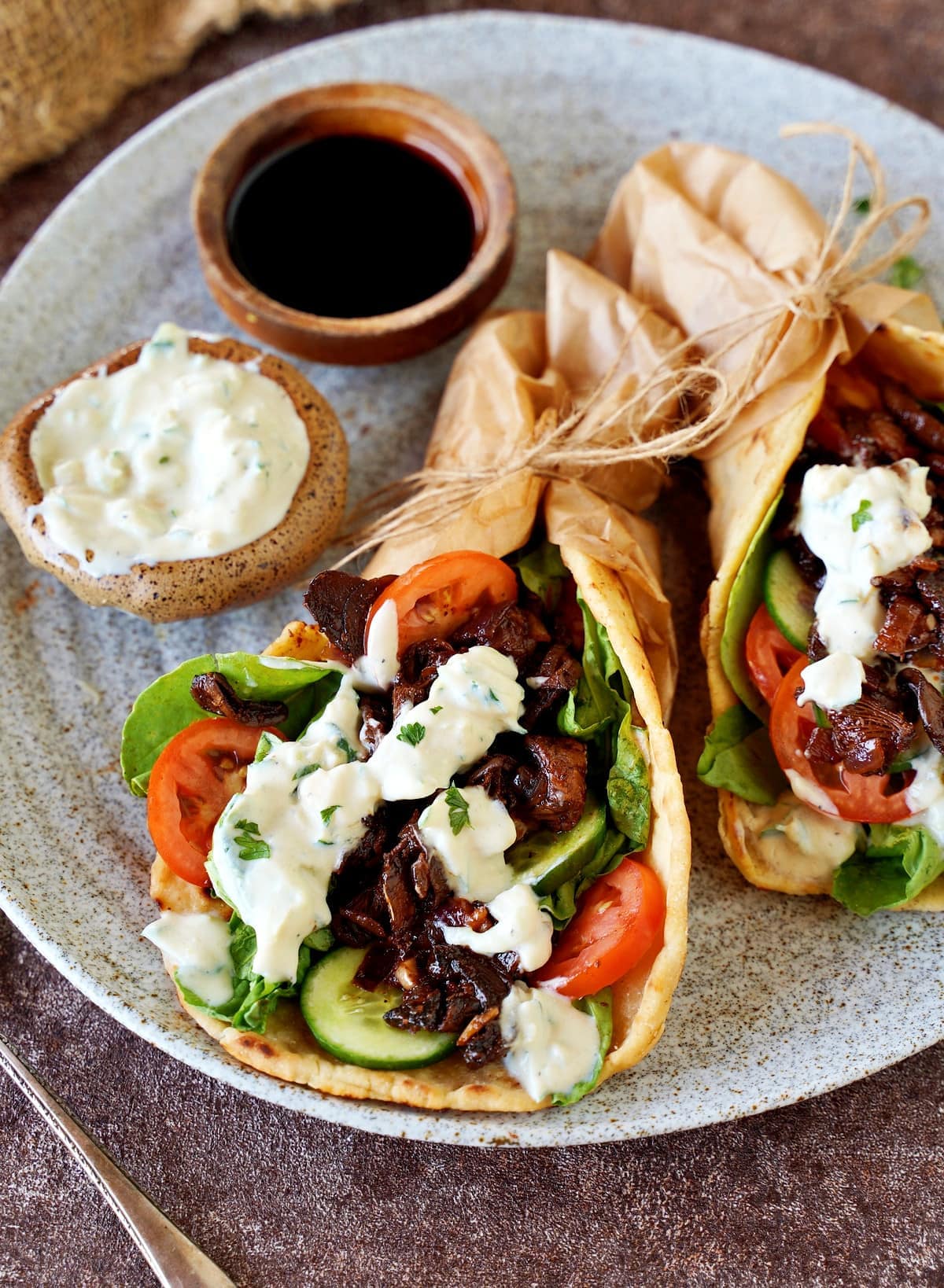 When it comes to dinner time, I’ll often make an International ‘themed’ spread, but lately, I really craved Greek food. So, along with my recently posted Greek tomato rice and vegan tzatziki, now it’s time to share my preferred vegan gyro meat to make the perfect veggie gyros!

Rather than relying on meat, this vegan gyro recipe comprises meaty mushrooms and a carefully selected list of aromatics and homemade gyros seasoning. I love using mushrooms as a meat alternative for plenty of hearty meals like mushroom bourguignon, mushroom risotto, portobello steaks, and mushroom stroganoff. And, while I recently made a similar ‘kebab’ dish of vegan shawarma (using jackfruit), I love the umami-rich meatiness of mushrooms for this dish.

This vegan gyro meat is plant-based, gluten-free, and far lighter than regular gyros takeout. Enjoy it loaded onto a pita wrap with salad and tzatziki (or garlic sauce), or enjoy it as part of another meal.

Why is it called gyro?

While this vegetarian gyro is made 100% meat-free, a traditional gyro is made with kebab meat. Gyro (or gyros) comes from a Greek word meaning ‘turn’ or ‘circle’ and refers to the spinning kebabs that the gyro meat is shaved from.

A Greek gyro recipe, as a meal, combines the meat slices with various salad vegetables and creamy tzatziki served in a pita bread wrap. 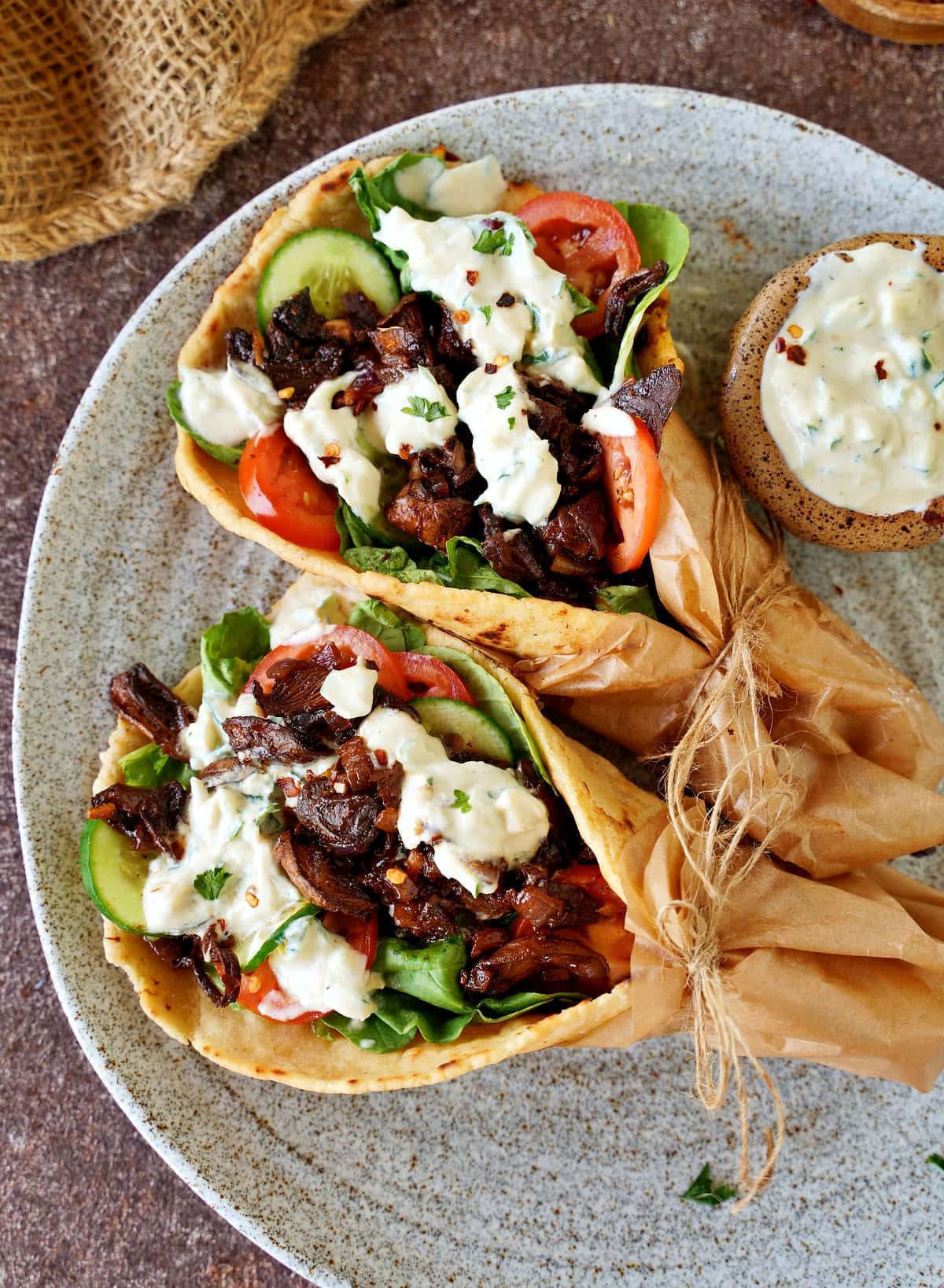 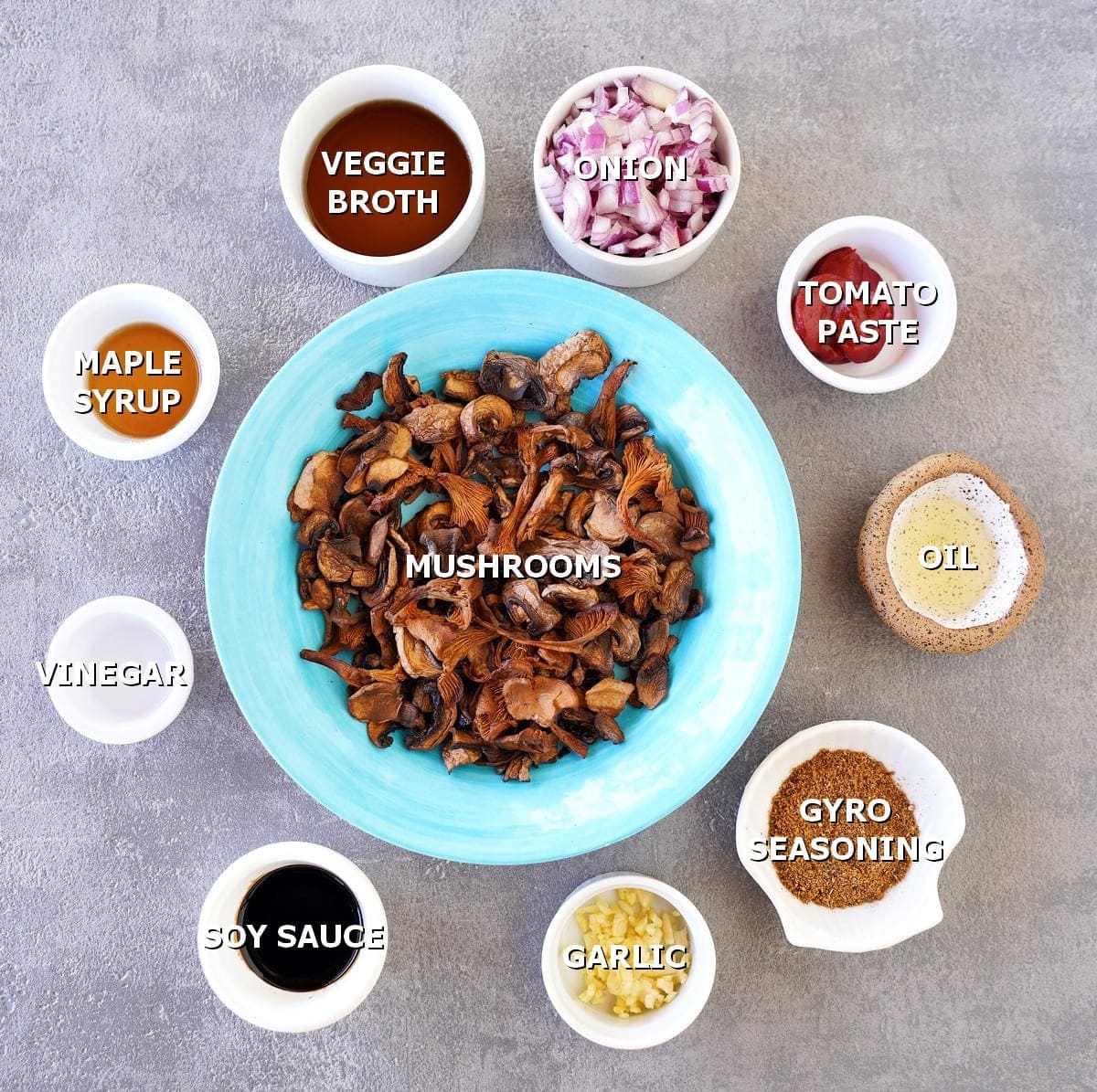 How to Make Vegan Gyros

If you want to make the vegetarian gyro even crispier, you could transfer the pan (if oven-proof) to your oven to broil for a few minutes, or until crisp.

You can top the pita while cold or warm them up first – either way; it tastes delicious! Also, feel free to add another popular addition to any gyros- French fries! 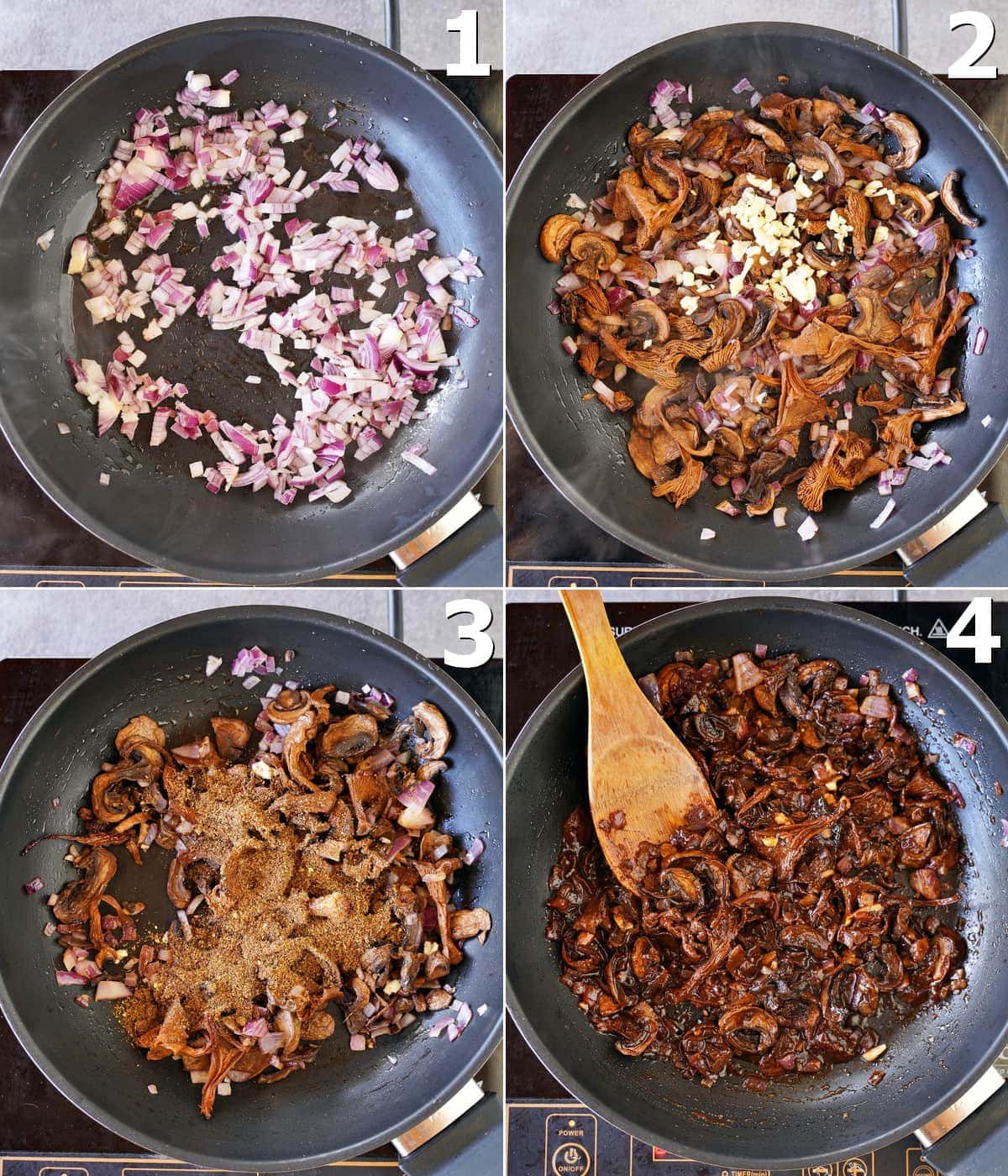 The prepared gyro is best eaten immediately, as the tzatziki and moisture from the vegan gyro meat will cause the pita to go soggy over time. However, if you place the tzatziki somewhere in the middle of the wrap, you can wrap it in foil. Store it in the fridge for 1 day for a simple grab n’ go lunch!

You can alternatively store the prepared vegan gyros in an airtight container for several days (2-4 days). You could also prepare the tzatziki in advance. Feel free to reheat in the microwave for 30-40 seconds, or until warmed through. 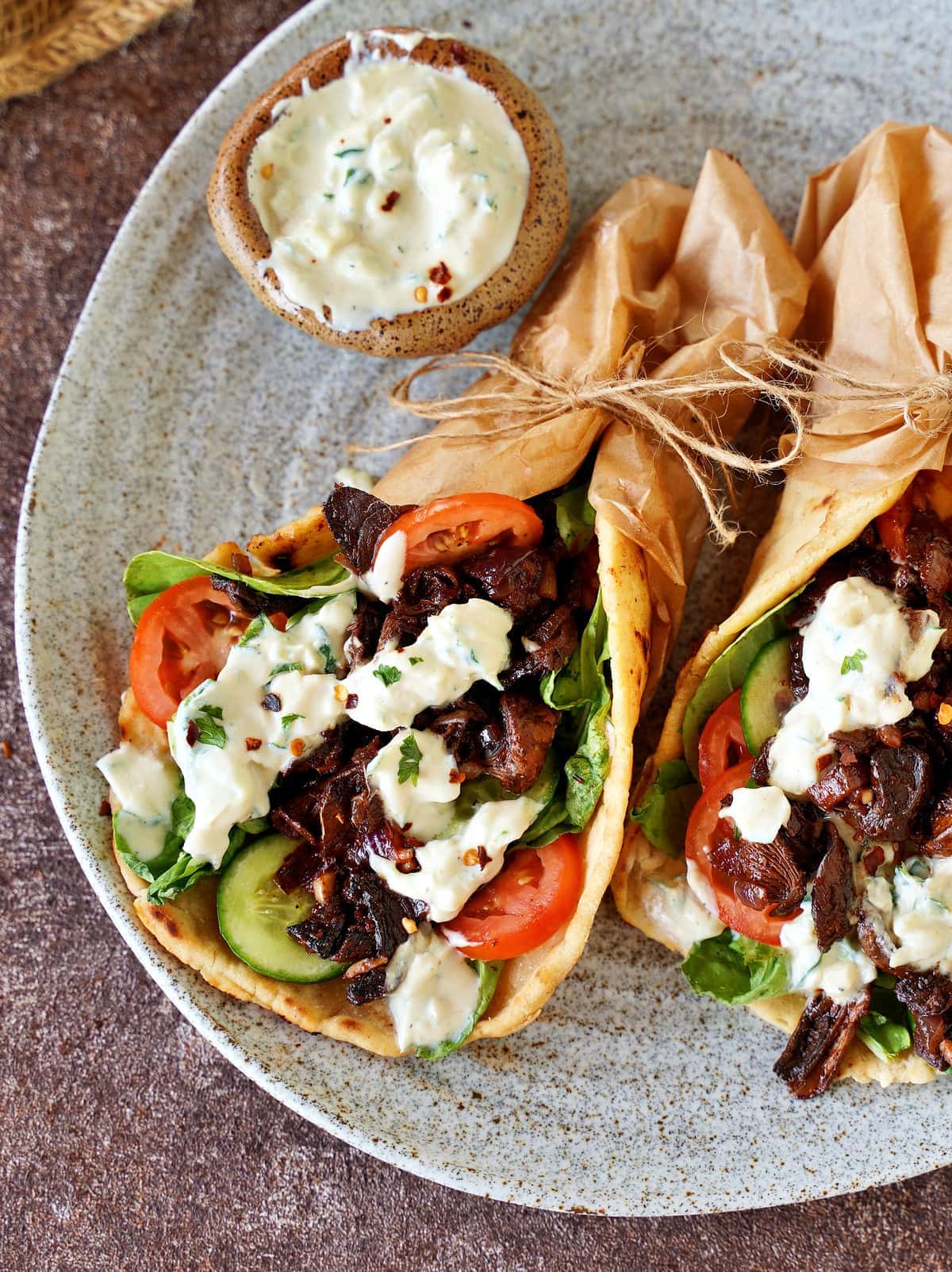 The traditional way to serve gyros is in a pita bread wrap with tzatziki sauce, tomato, cucumber, lettuce (and often onion). However, that isn’t the ONLY way to enjoy this vegan/vegetarian gyro. You can also:

You can optionally serve the vegan gyros wrapped up in some parchment paper/foil and string to help hold it together while eating! 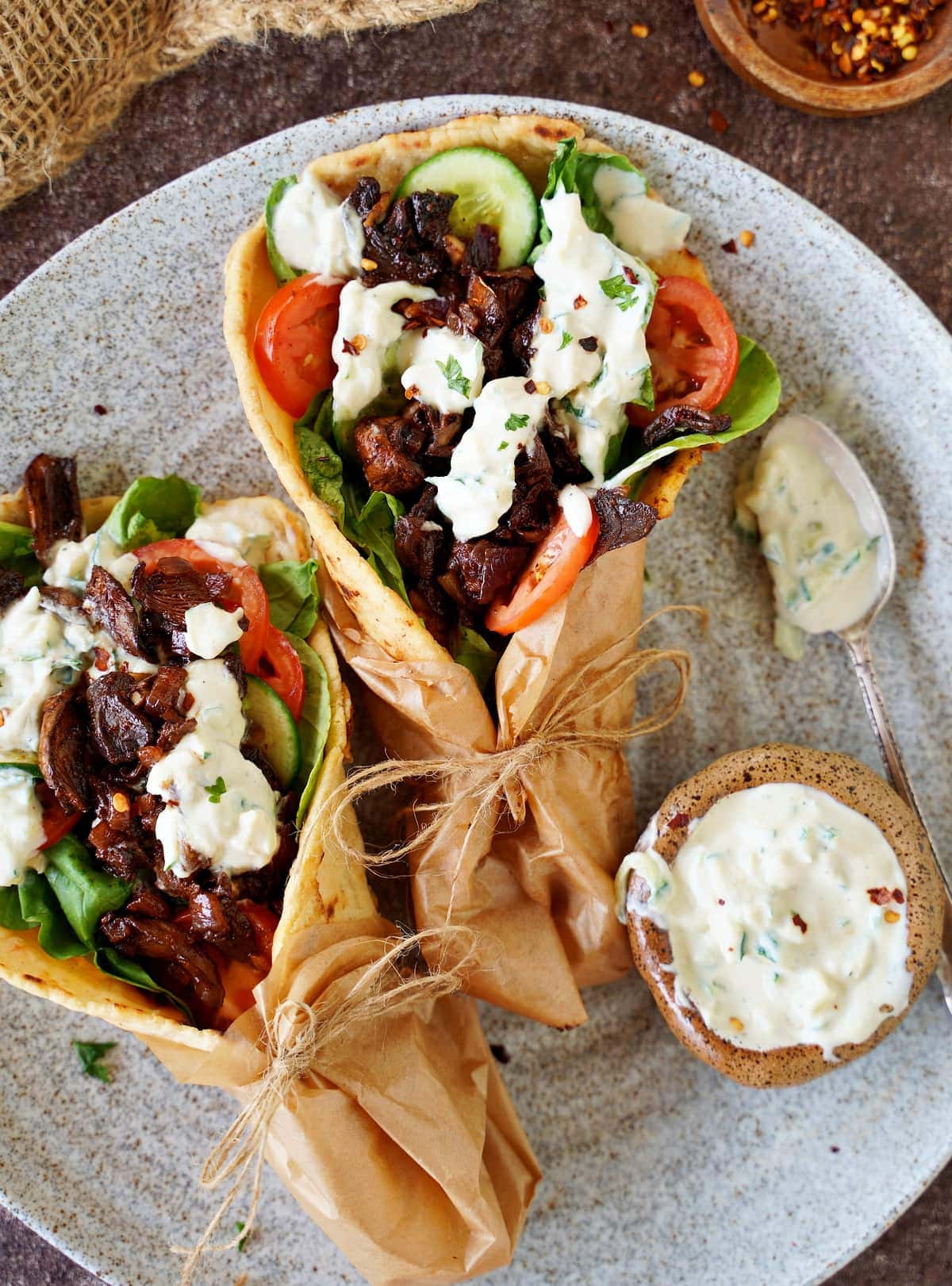 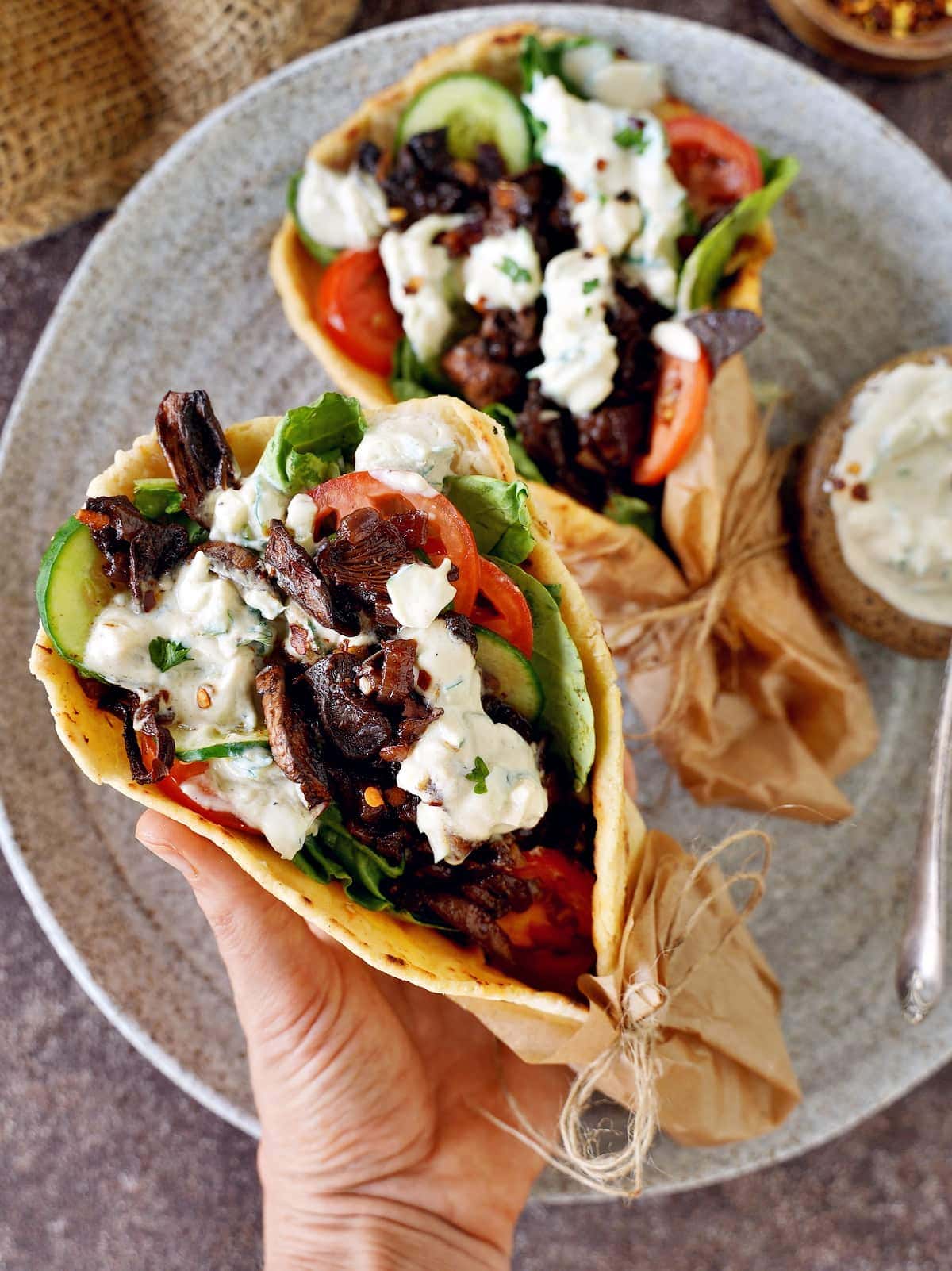 If you try this vegan gyro recipe, I’d love a comment and ★★★★★ recipe rating below. Also, please don’t forget to tag me in re-creations on Instagram or Facebook with @elavegan #elavegan – I love seeing them. 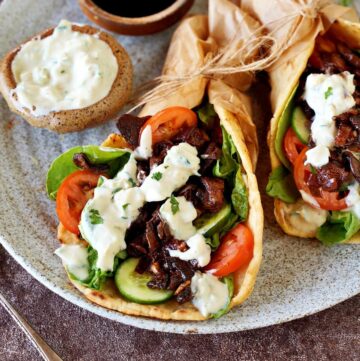 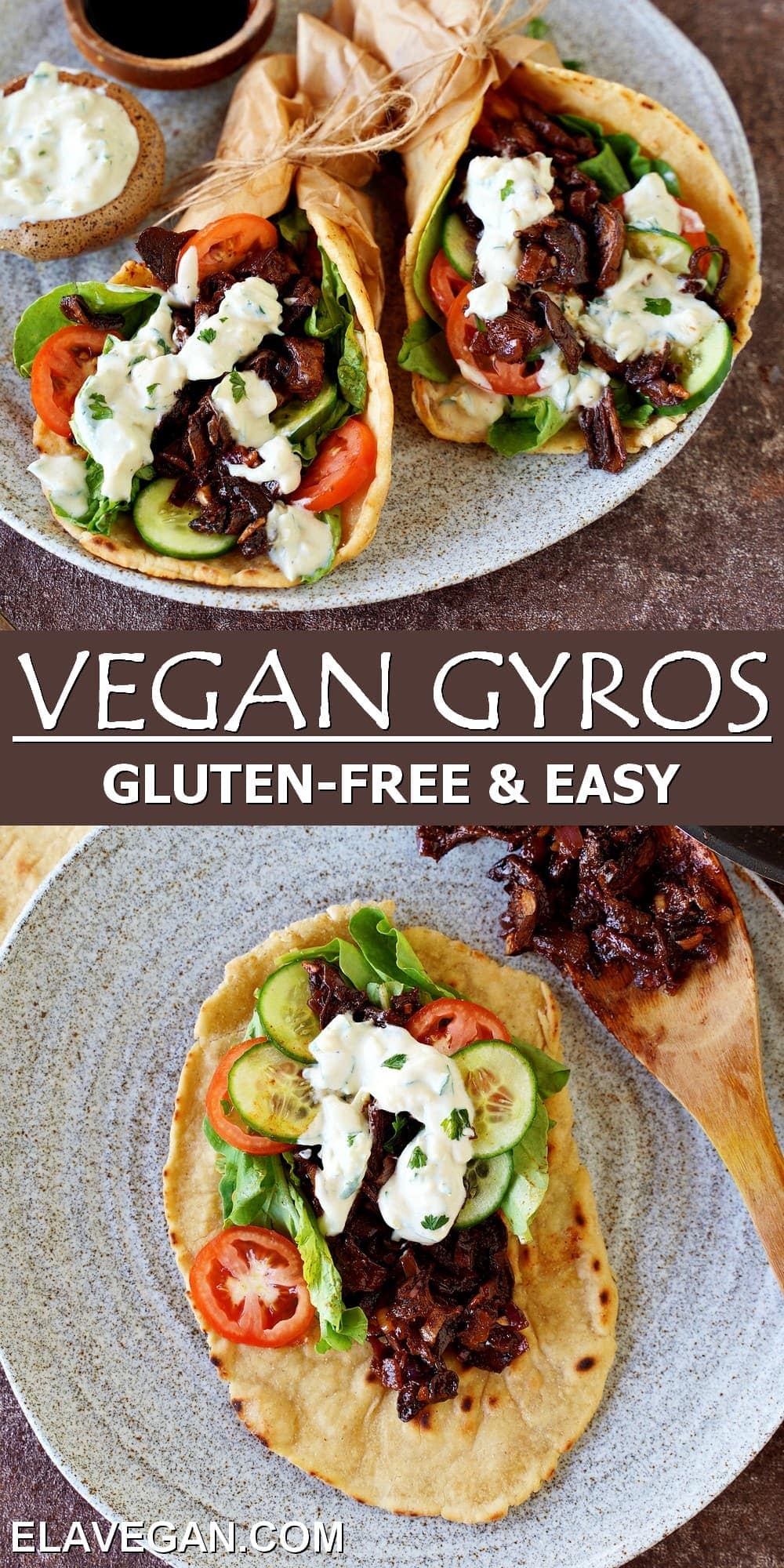 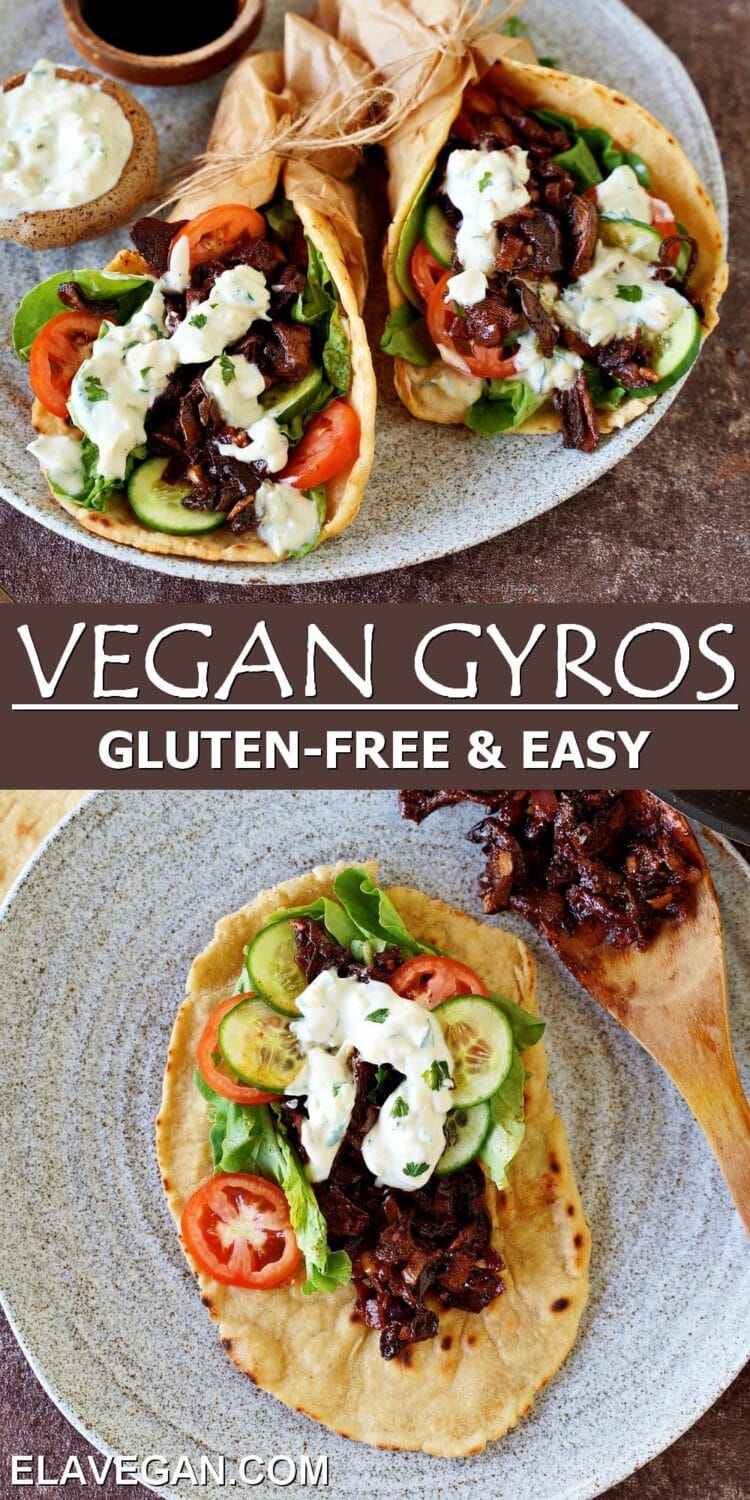