This vegan kebab is made from marinated jackfruit served as a sandwich within pita, salad veggies, and a tangy vegan garlic yogurt sauce. The result is a comforting, satisfying meal worthy of a vegan feast. Plus, this recipe is dairy-free, gluten-free, and is the ultimate veg shawarma for meat-free eaters! 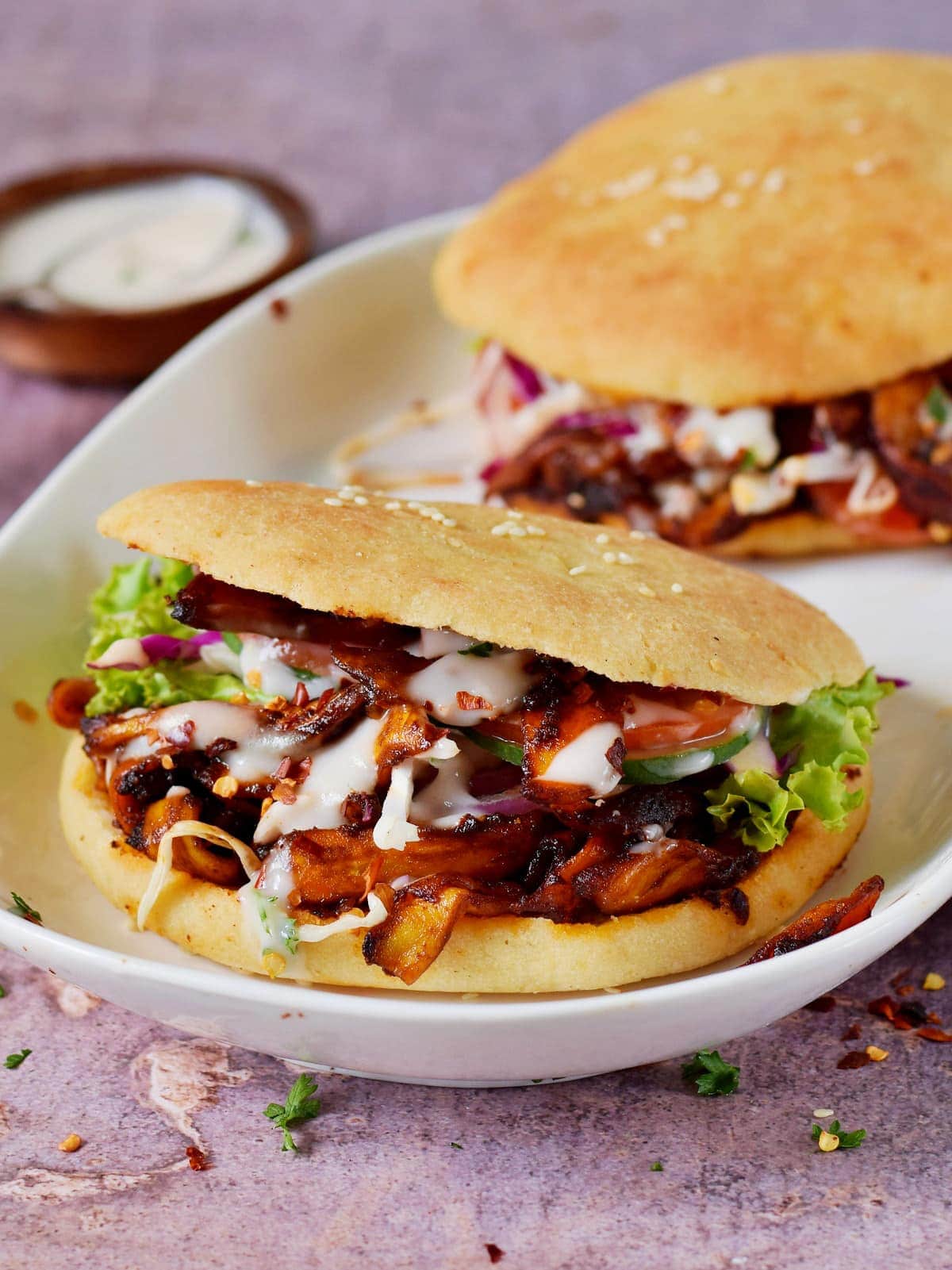 Depending on where you live, doner kebab is one of ‘the’ ultimate fast-food options. There’s something incredibly moreish about a loaded kebab sandwich with salad veggies, tons of vegan ‘meat’, a tangy yogurt sauce, and sides. Whether it’s in the form of shawarma, doner kebab, gyros, al pastor – there are tons of ways to make and serve this traditional dish.

Unfortunately for vegans, the introduction of veggie shawarma and doner kebab recipes and restaurant options are still playing ‘catch up.’ But that doesn’t mean you can’t enjoy a delicious vegan kebab sandwich at home. I love eating this veg shawarma ‘fast-food’ style, loaded up on a flatbread so the flavors and oils of the vegan meat and sauces can infuse into the Flatbread for epic levels of deliciousness.

Before we get to the recipe, though, let’s look a little into the main kebab varieties and what separates them. 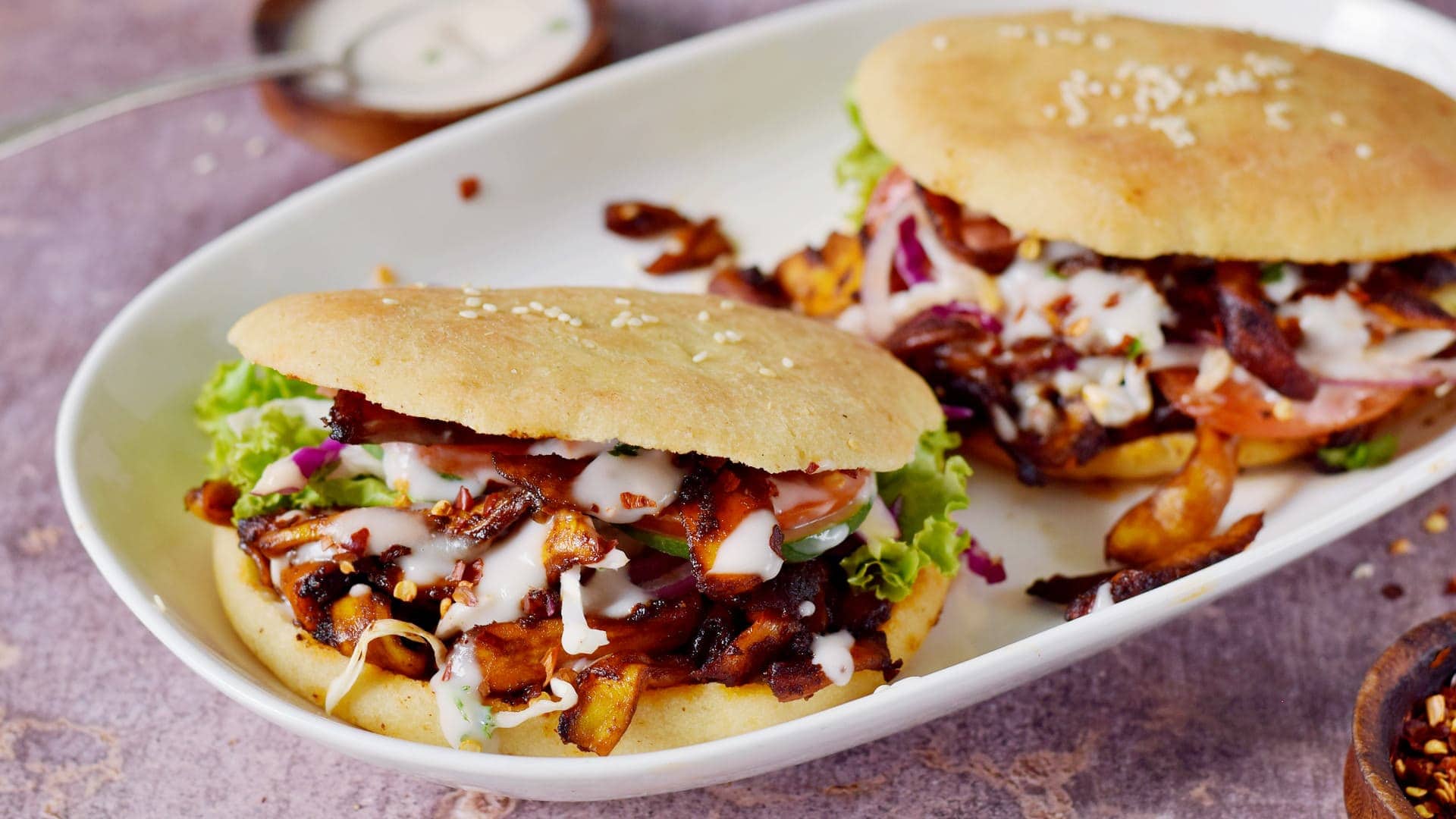 Doner Kebab vs. Shawarma vs. Gyros?

There is some controversy surrounding the origins of doner kebab and the various kebab differences. However, this is what I’ve learned.

1. Doner kebab (döner kebap) is made of seasoned and stacked meat in a cone shape that spins as it cooks. It has roots in the Ottoman Empire – now Turkey – and Germany (through Turkish immigrants) and is incredibly popular in both locations. Döner translates from Turkish to ‘turning/rotating’ and describes how the meat spins as it cooks.

While it can be made with several types of meat, the original and most popular options are lamb and chicken. To serve the kebab, the outer layers are shaved down as it spins.

2. Meanwhile, Shawarma is a type of doner kebab in a meat sandwich form and was adapted by Arab/ Middle Eastern countries from the Turkish doner kebab. The spices used to marinate the meat can contain turmeric, cumin, cloves, coriander, garlic, and/or cinnamon.

The main difference is that shawarma (an Arabic spin on the Turkish word Çevirme – meaning ‘to spin’) is also served alongside middle eastern sides – including Hummus, Fattoush, and Tabbouleh.

3. In Greek cuisine, the Gyros kebab (Greek for ‘turn’) has adapted to contain more Mediterranean herbs. Gyros can include oregano, paprika, rosemary, and thyme. It is often made with lamb, beef, pork, or chicken.

This is then served alongside flatbread, salad, and Greek-style tzatziki sauce. One of the main differences is that this style is often served with fries too. 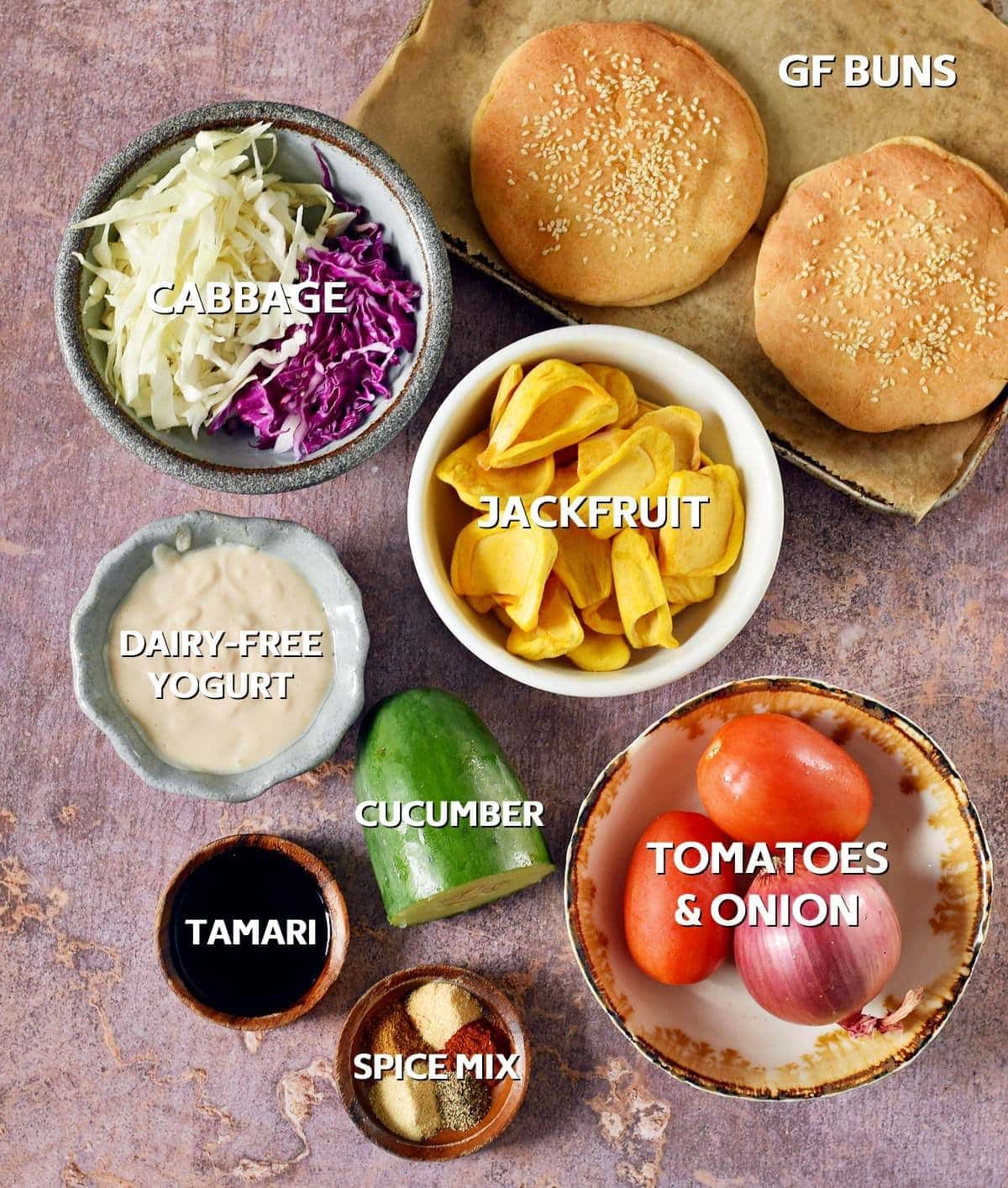 So, What Is In This Vegan Kebab?

Having said all of the above, my recipe is obviously 100% meat-free. It combines elements of all three, making kebab-style ‘meat’ from jackfruit, marinating it in spices that feature in all the above options, served with flatbread/pitta and salad.

Jackfruit (native to South-East Asia) is a nutrient-dense, eco-friendly meat alternative with a low water and carbon footprint and fairly neutral ‘melon’- like flavor. It is particularly great for emulating meaty products like pulled pork and other meaty ‘bits,’ which is great for the shaved-meat-style kebab. The texture has just enough chew, but without having an overwhelming flavor, to soak up the marinade and produce a slightly chewy, flavor-packed veg kebab.

One of the most impressive things about this ingredient, though, is its nutritional value. Jackfruit is incredibly nutrient-dense and contains fairly moderate levels of almost every vitamin and mineral you need. This includes vitamin A, C, manganese, magnesium, potassium, and copper (source).

Plus, this vegan shawarma recipe is far healthier than your local takeaway kebab, with far less fat, and can easily be made gluten-free too. 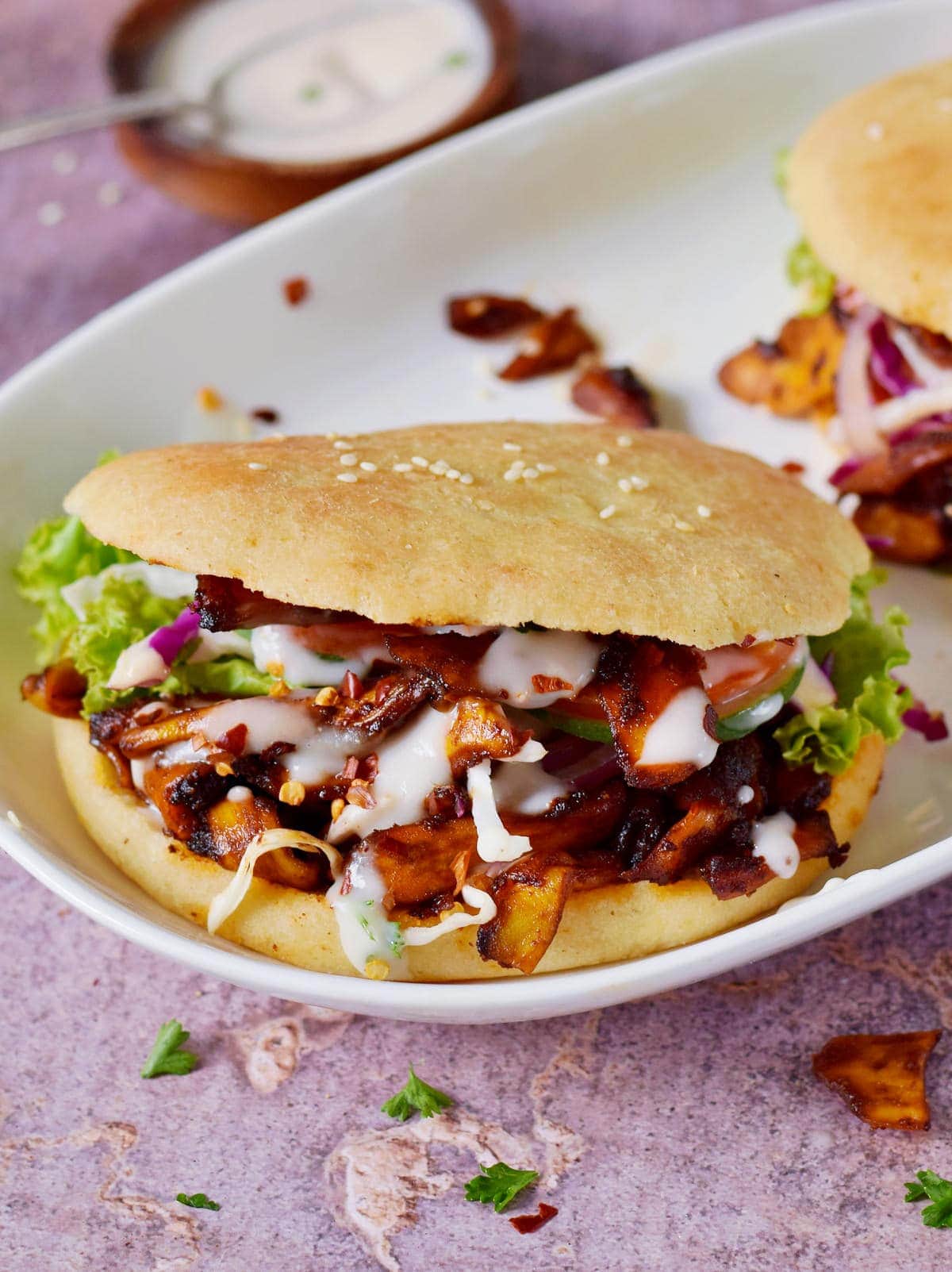 Step One: Prepare the jackfruit

Add the dried jackfruit to a bowl and pour in hot water. Allow them to soak for 10-15 minutes, then drain (skip this step if using canned jackfruit).

Slice the jackfruit into strips. If using canned young jackfruit, shred the pieces by hand (or fork). You could also use a food processor and pulse a few times.

Add all marinade ingredients to a bowl and stir with a whisk/spoon. Add the jackfruit and let it marinate for at least 15 minutes (the longer, the better). 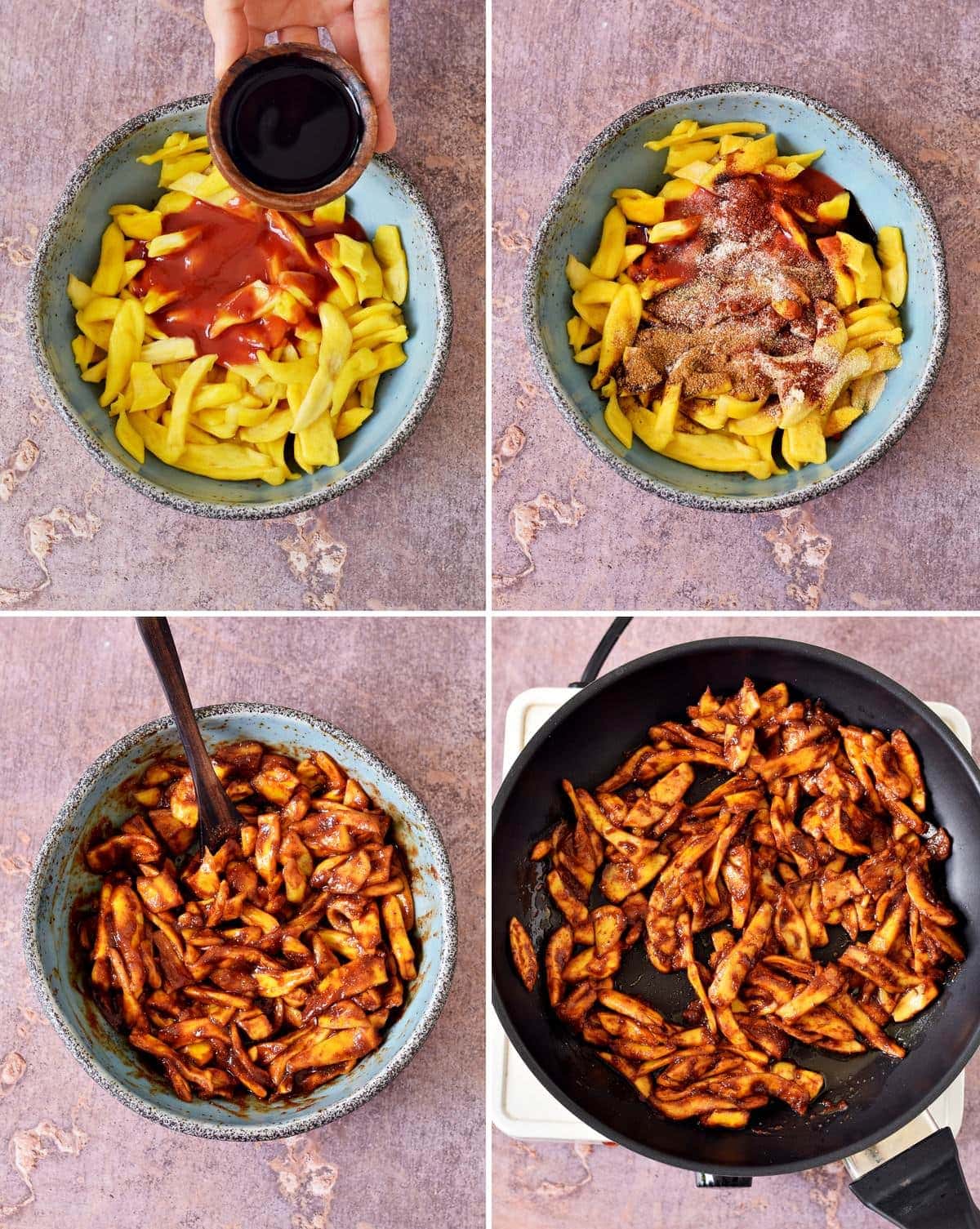 Combine all the yogurt sauce ingredients in a bowl and mix. Then, slice the tomato, cucumber, onion, and shred the cabbage.

Heat oil in a skillet and add the marinated jackfruit—Cook for 10 minutes over medium heat. Meanwhile, heat the bread in the oven or toaster. 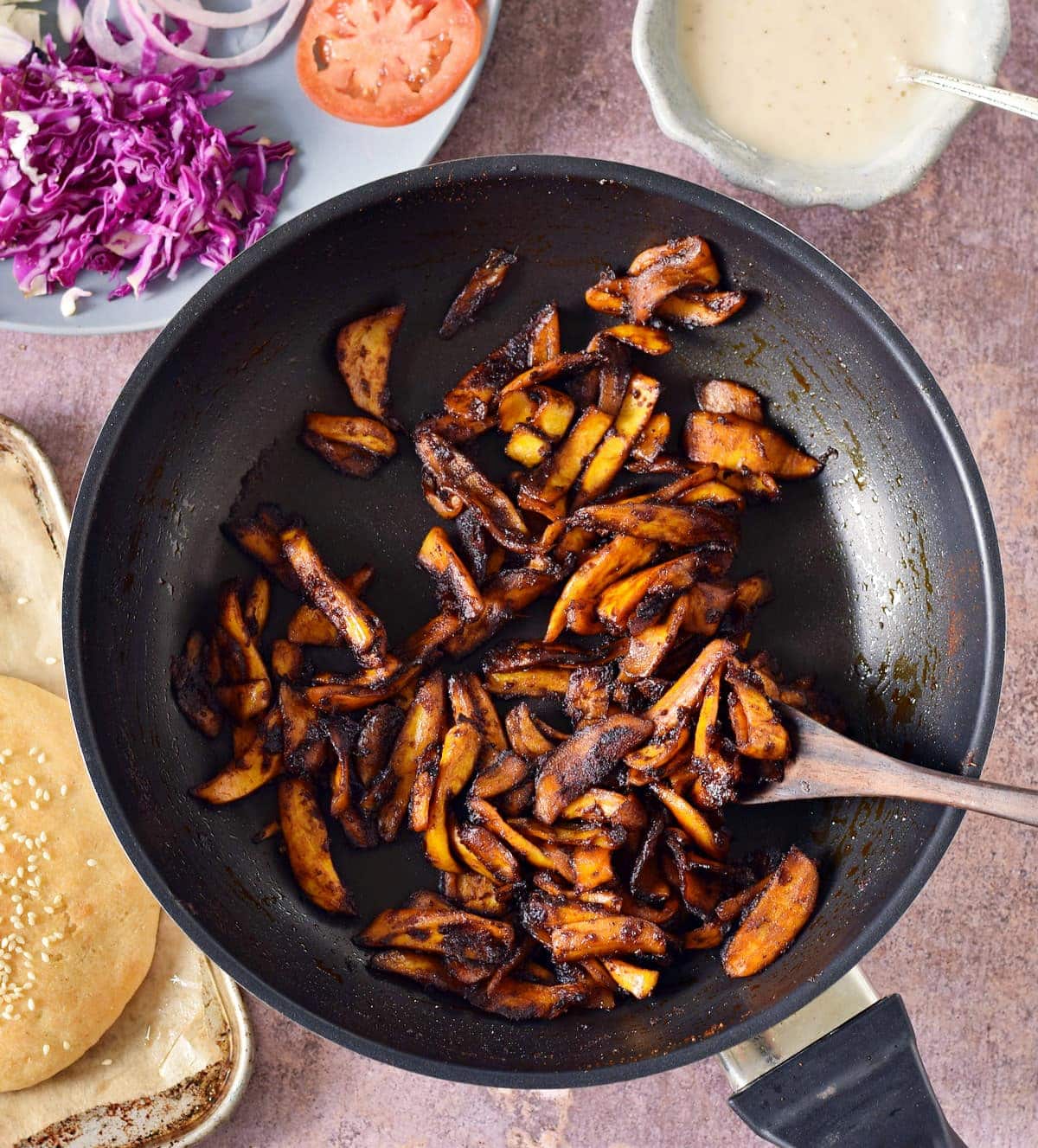 For the full ingredients list, ingredient measurements, and nutritional information, read the recipe card below. 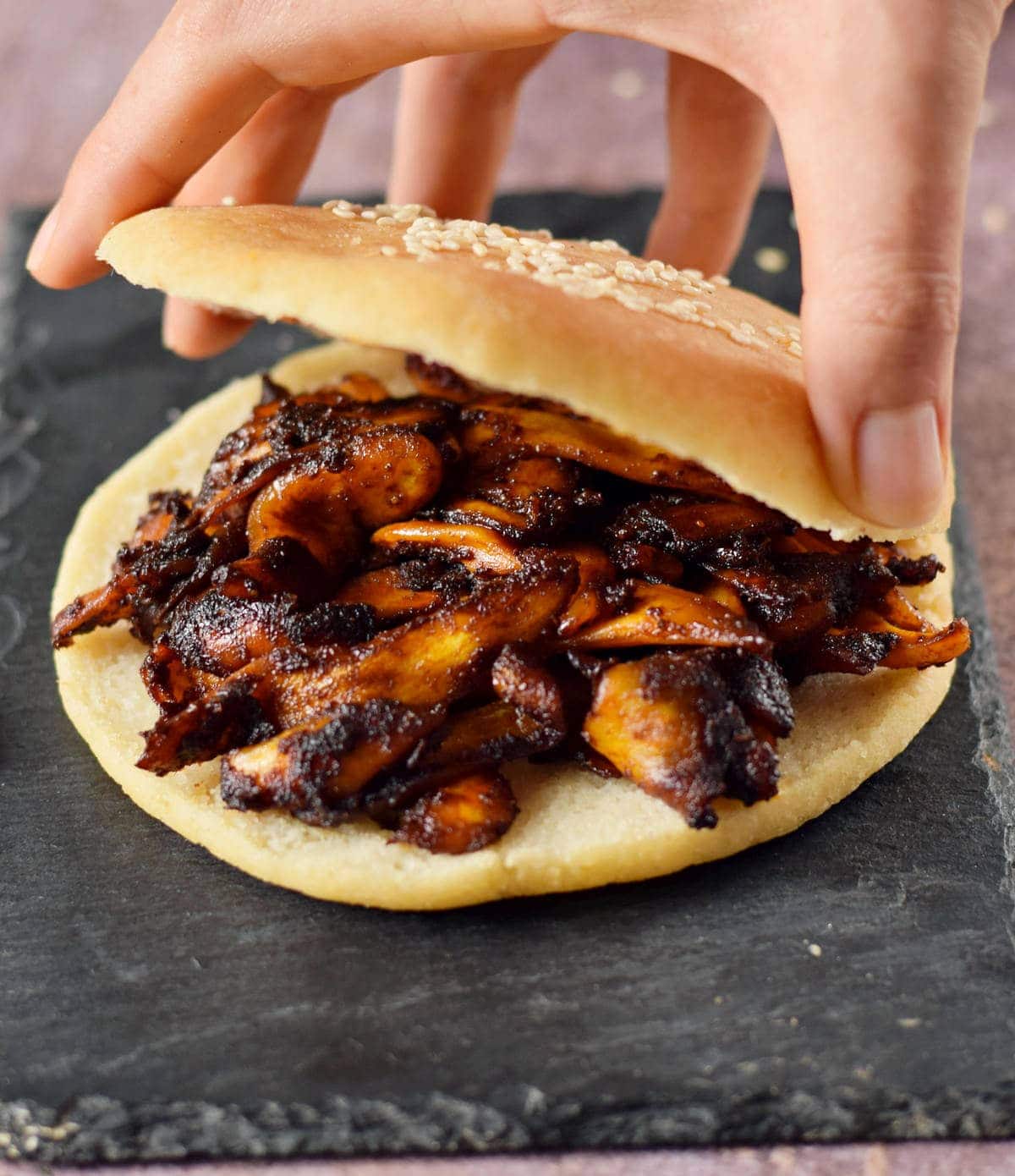 How To Serve & Store

It’s best to eat the vegan kebab immediately, as the ingredients will make the flatbread soggy over time. If you prepare the jack fruit separately, then this may last a couple of days in the fridge.

Aside from serving as a sandwich, you can also serve this vegan kebab: 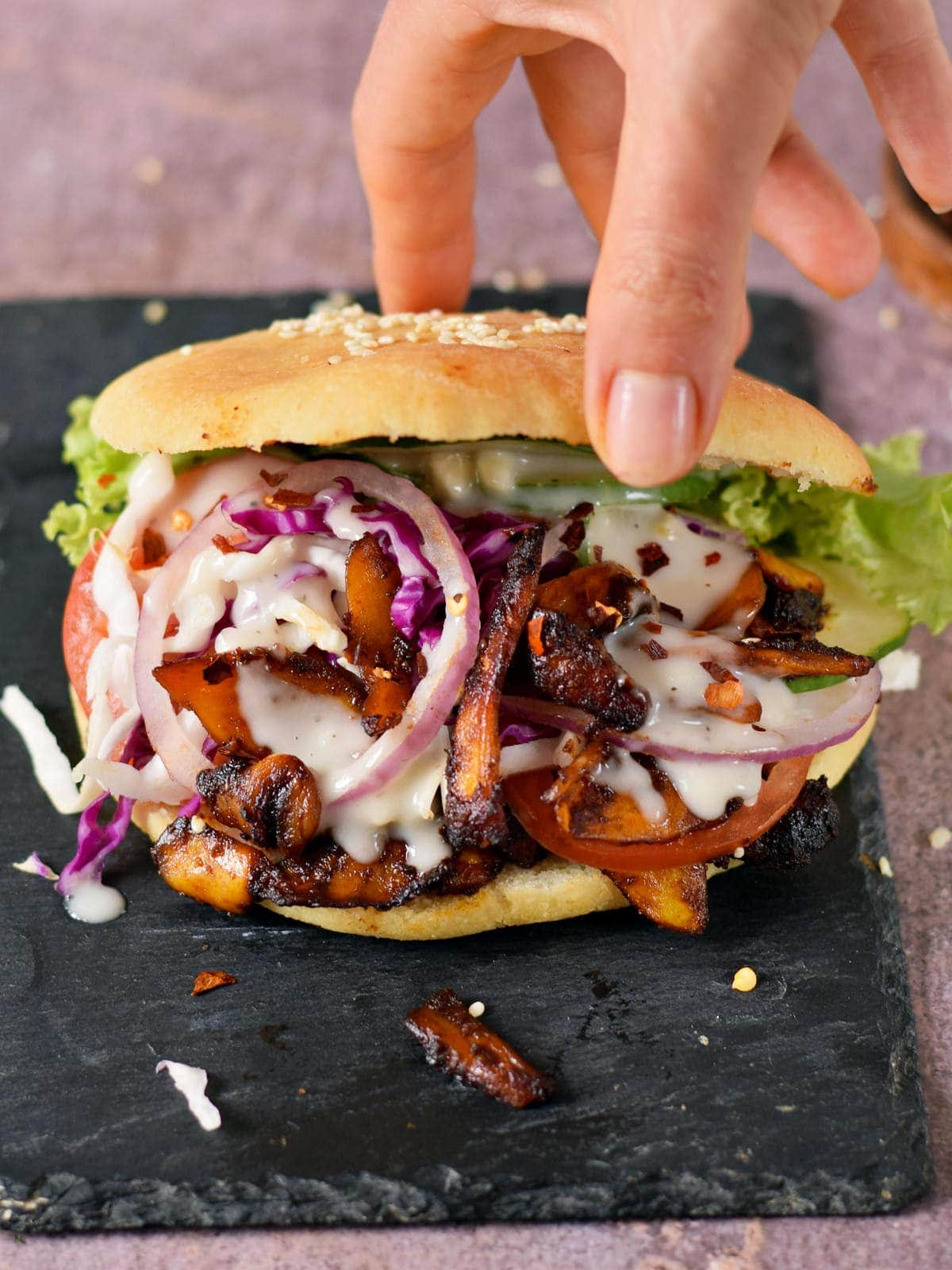 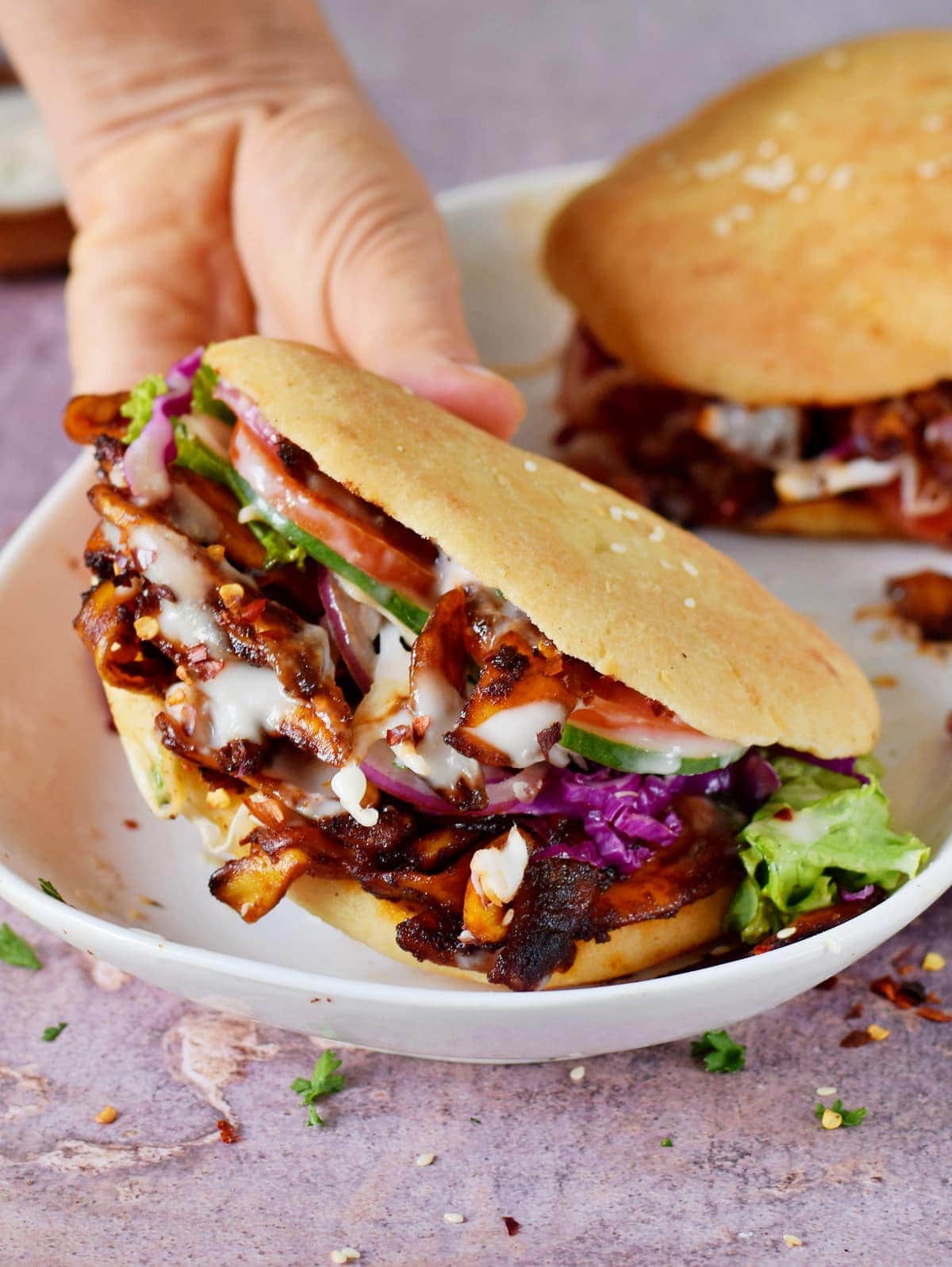 If you try this vegan doner kebab recipe, I’d love a comment and ★★★★★ recipe rating below. Also, don’t forget to tag me in re-creations on Instagram or Facebook with @elavegan and #elavegan – I love seeing your recreations. 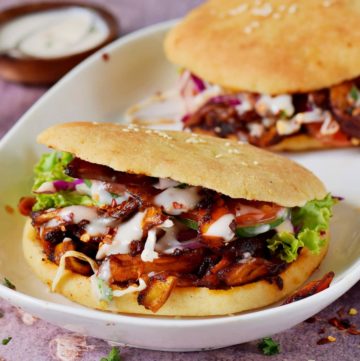 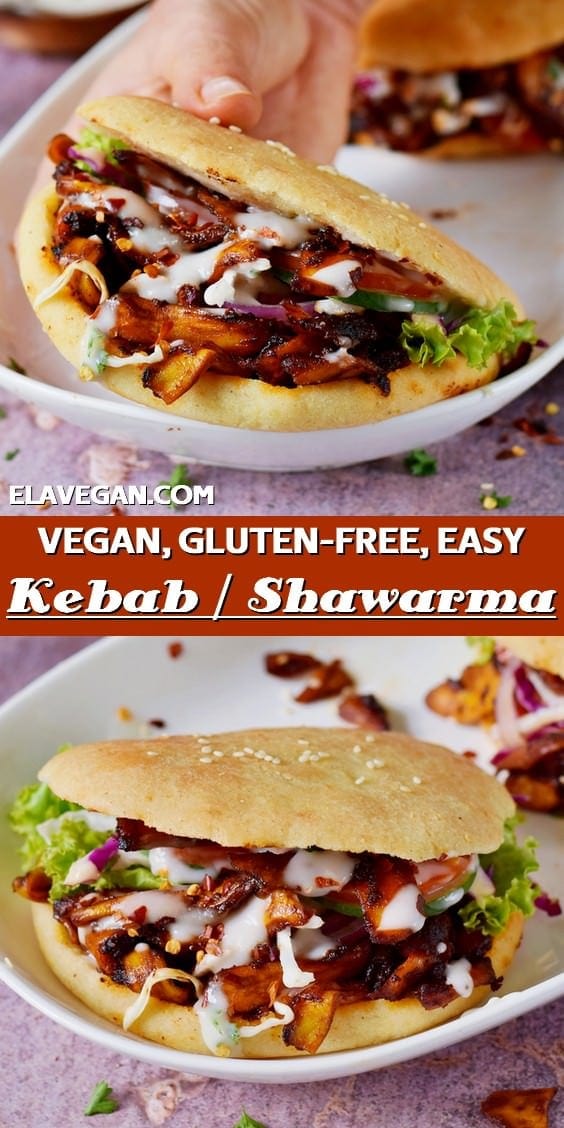