This Vegan Mushroom Stroganoff is a creamy and hearty dinner fit for a king or queen. Chock-full of healthy, wholesome ingredients, this dish is extremely satisfying. The mushroom sauce is gluten-free, dairy-free, ready in 25 minutes, and loved by kids and adults alike. 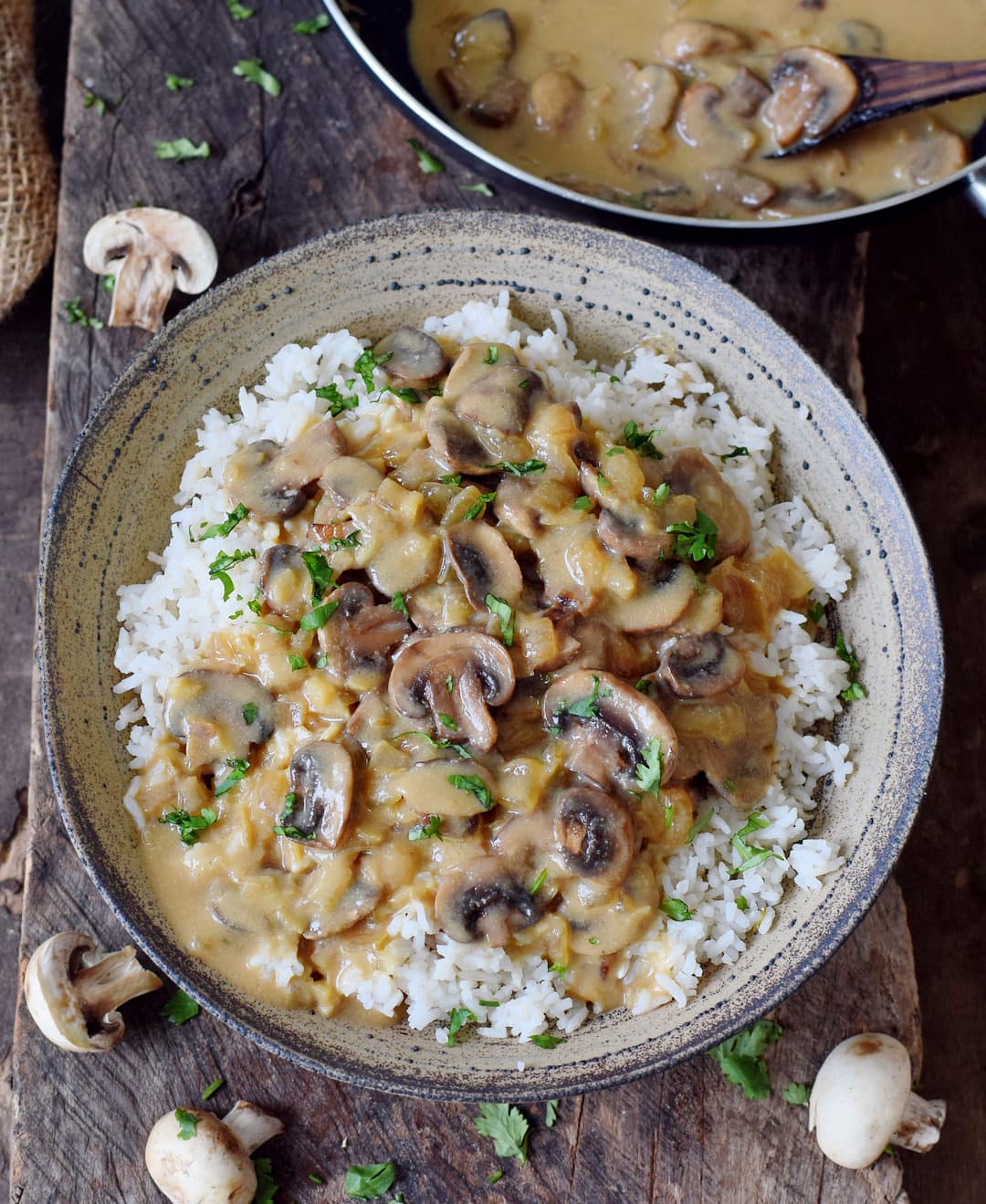 Mushroom Stroganoff was my absolute favorite dish when I was a child. I was a picky eater back then and I almost never finished a meal. However, when my mom made this dish I licked out the entire plate! I am not kidding! I wasn’t vegan as a kid, I was vegetarian though. However, it’s not difficult to make this Mushroom Stroganoff vegan. 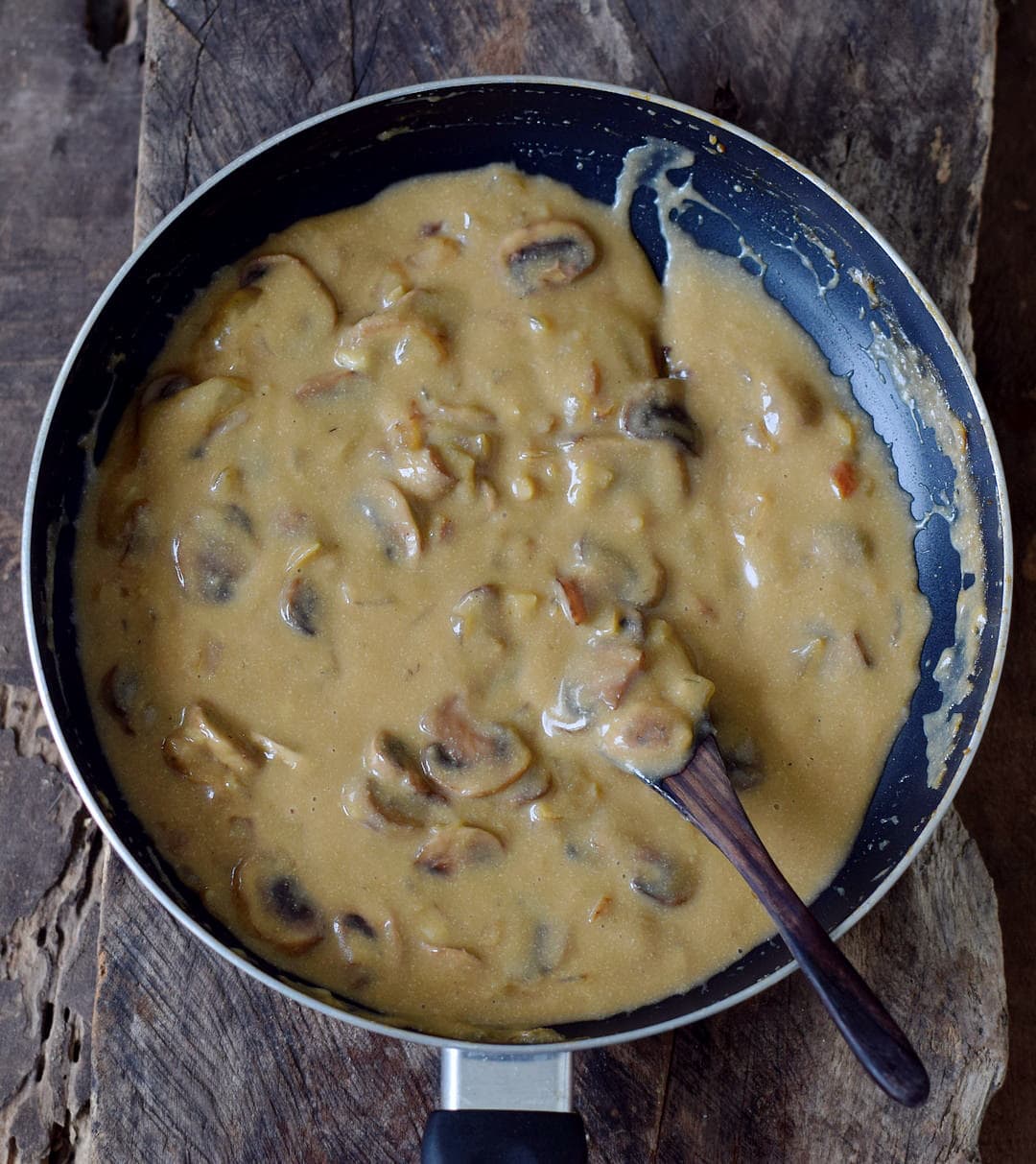 Did you know that back in the late 1800’s in Russia, they held cooking contests? Well, not just any cooking contest, but contests with some of the best chefs around. The chefs usually worked for wealthy families, companies, or businesses. The contests were held yearly and the chefs were usually chosen to represent these big companies.

If the chef of that company won (even if they were the one who created the recipe themselves) it was customary that they name the dish after their employer. More specifically, the owner of the company or business they worked for.

Stroganoff was actually a recipe that was created out of this contest. The year was 1891 and the winner was an amazing French chef who worked for a wealthy family of the name Stroganov. When his recipe won the contest that year (which he created just for the contest) as was customary, he named it after his employer – the Stroganov family.

From there on out, the new recipe was formerly known as “Beef Stroganov” or “Beef Stroganoff” and was eventually passed all around the world as a favorite dish. 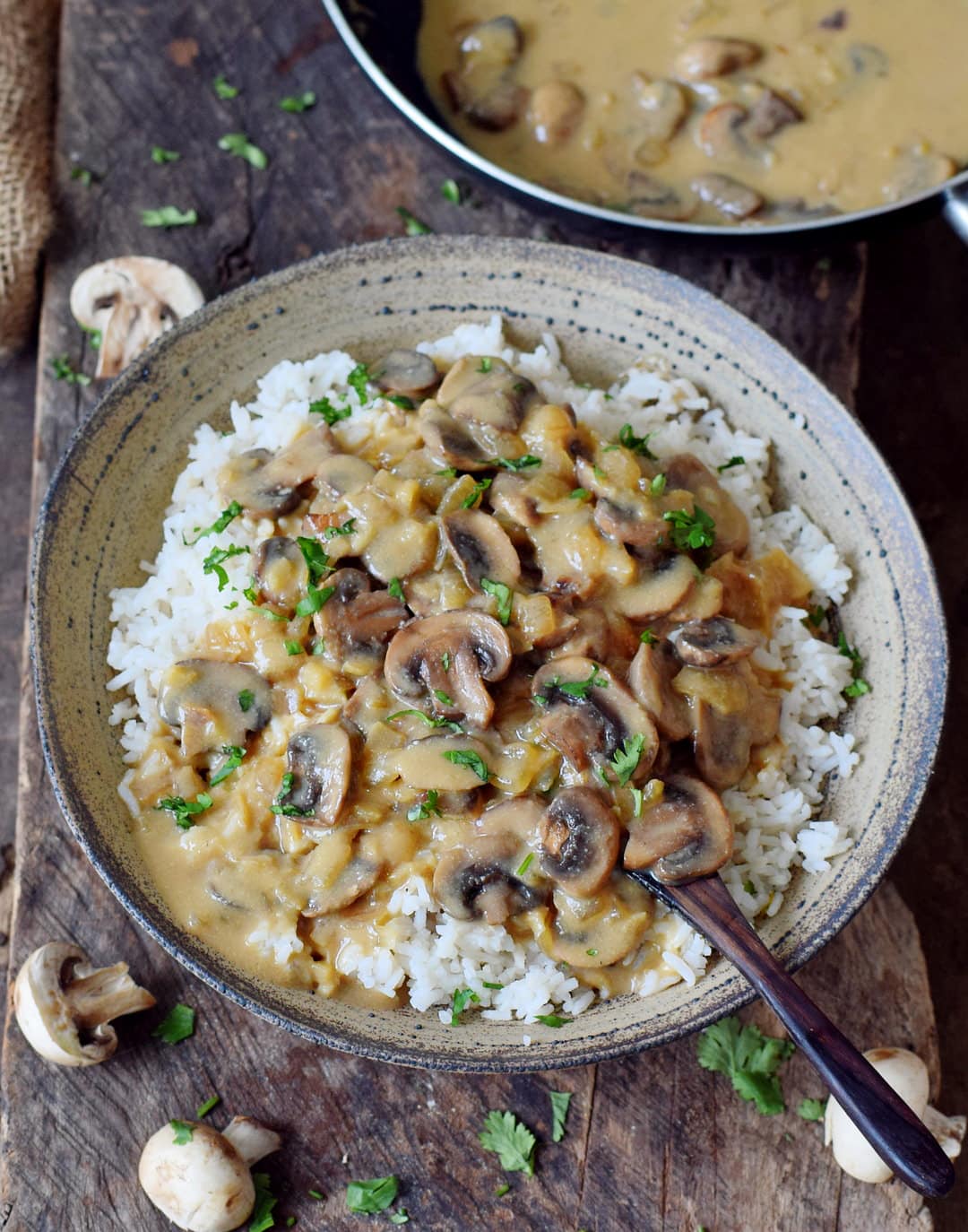 As mentioned before, Stroganoff is a Russian dish that goes by both names “Stroganoff” and “Stroganov.” The first spelling is simply a rendition of the family’s names that simply comes from the recipe being passed all around the world.

The traditional homemade Stroganoff dish is strips of beef, cooked in a sauce that’s heavy on the sour cream, and then it’s served over egg noodles. However, my Stroganoff version is, of course, vegan. I use a delicious mushroom sauce in place of the beef and sour cream, that’s definitely not lacking in the creamy and tasty department. In fact, I think this is an easy Stroganoff recipe in comparison to the traditional. 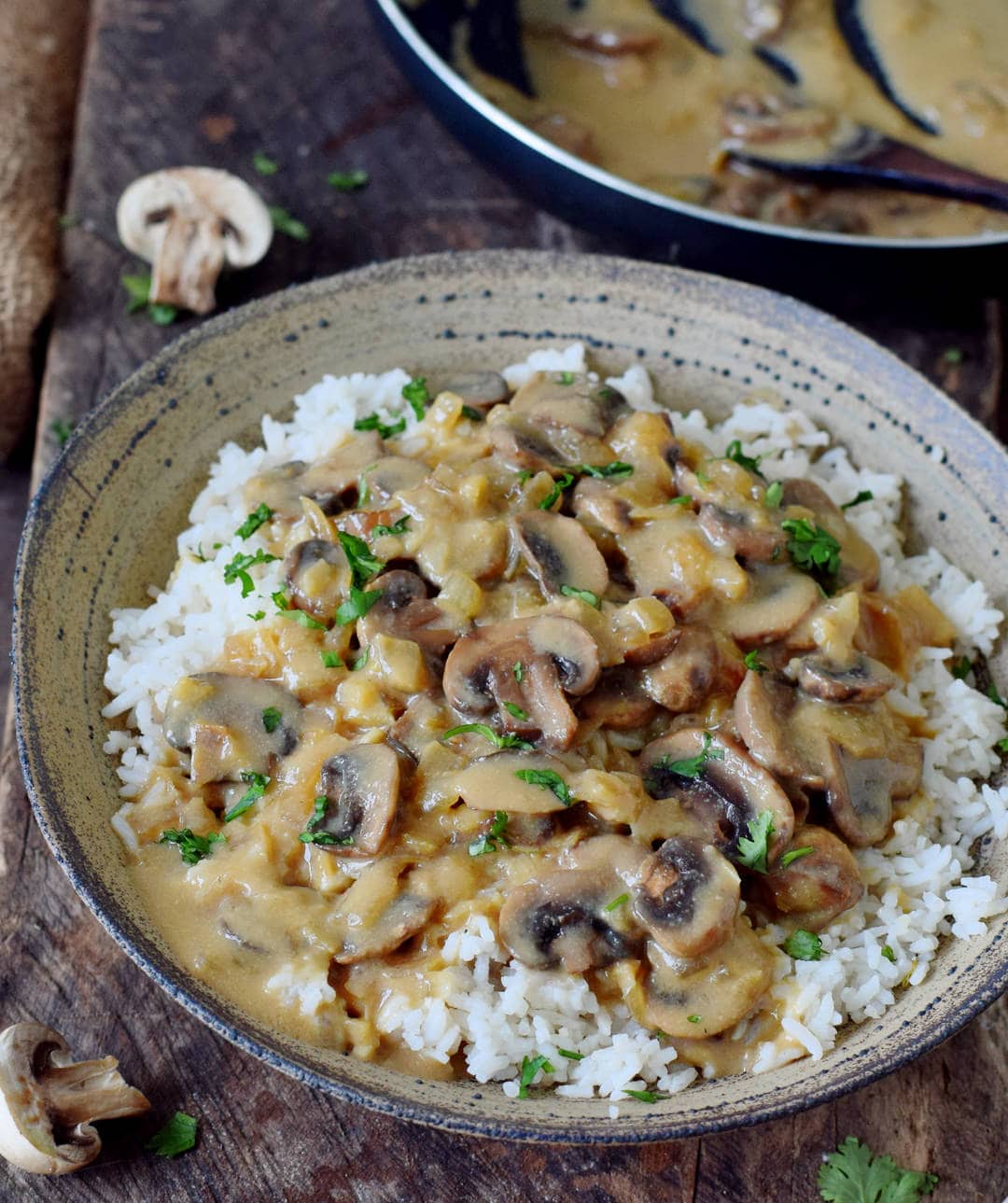 Step 1. Sauté or fry up the onion in a large skillet with heated oil. After about five minutes of frying, add the garlic to the pan and fry for one more minute.

Step 2. Make sure the stove is set to medium heat and add the mushrooms, frying them for about five minutes.

Step 3. If you’re using the cooking wine and nutritional yeast flakes, add those in now. Also add the broth, tamari, and spice mixture.

Step 4. While you’re bringing the mixture to a boil, in a separate small dish, combine the plant-based milk and cornstarch. Stir well until dissolved.

Step 5. Add the cornstarch slurry into the pan, stir well, and let simmer on low/medium heat for about ten minutes or until it starts to thicken.

Step 6. Add the fresh herbs of your choice such as tarragon, parsley, or thyme. Serve over white or brown rice and enjoy! 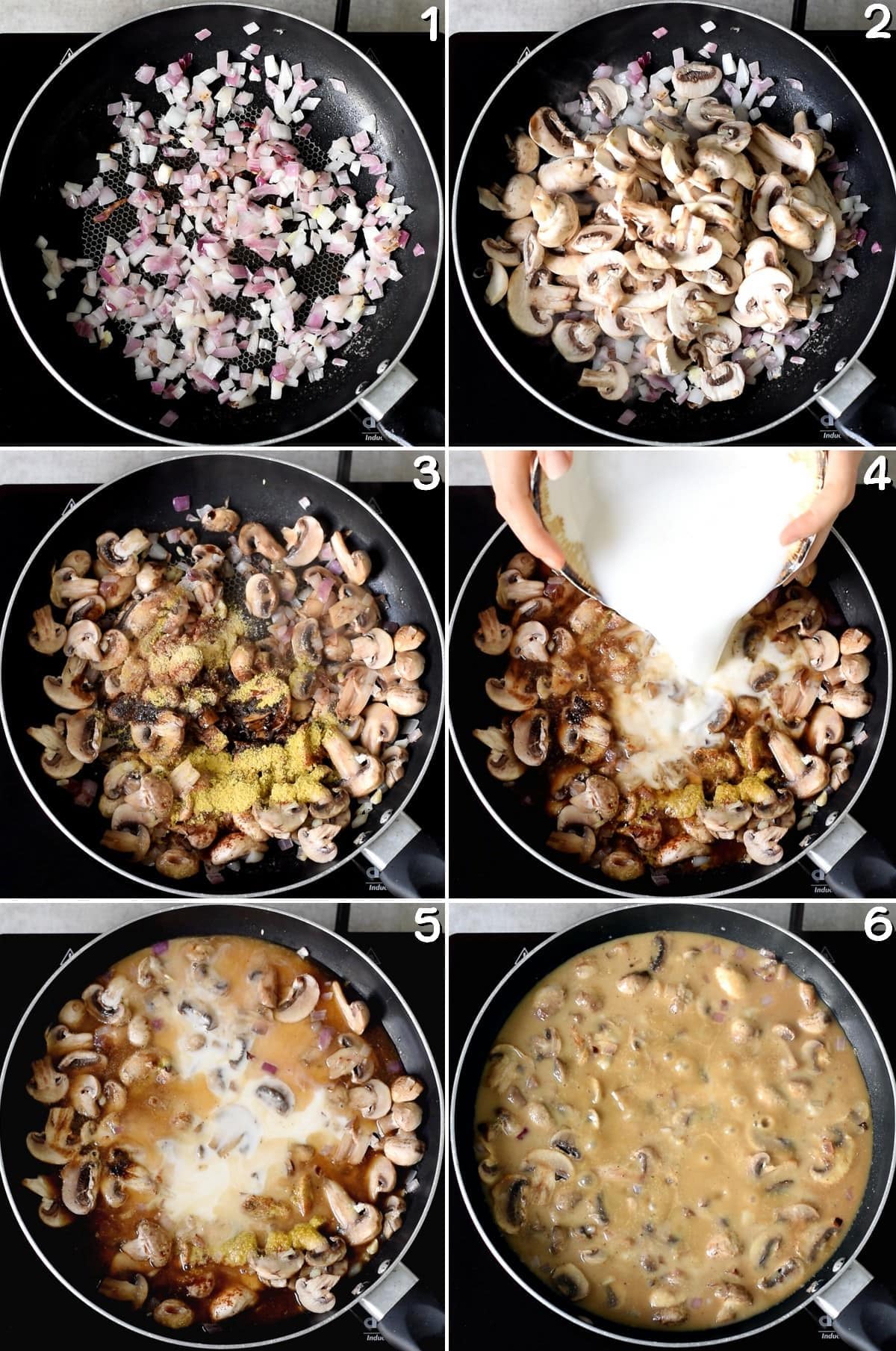 Storage – Store in an airtight container in the fridge for up to 3 days. Can store in the freezer in the same way for up to 3 months.

Use pasta – This flavorful mushroom sauce not only tastes amazing over rice, but I also love to serve it over pasta! And if you haven’t tried it over mashed potatoes yet, you’re really missing out.

Make it spicy – If you would like to add a kick to your dish, you can add some red pepper flakes in with the other spices.

Add tofu for extra protein – Tofu would go great in this dish! Simply slice the tofu into large ½-inch chunks, spread them on a baking sheet, and bake them at 400 degrees for 20-25 minutes or until golden brown. Check the exact instructions in this tofu recipe. Toss them in the mushroom mixture a couple of minutes before it finishes. 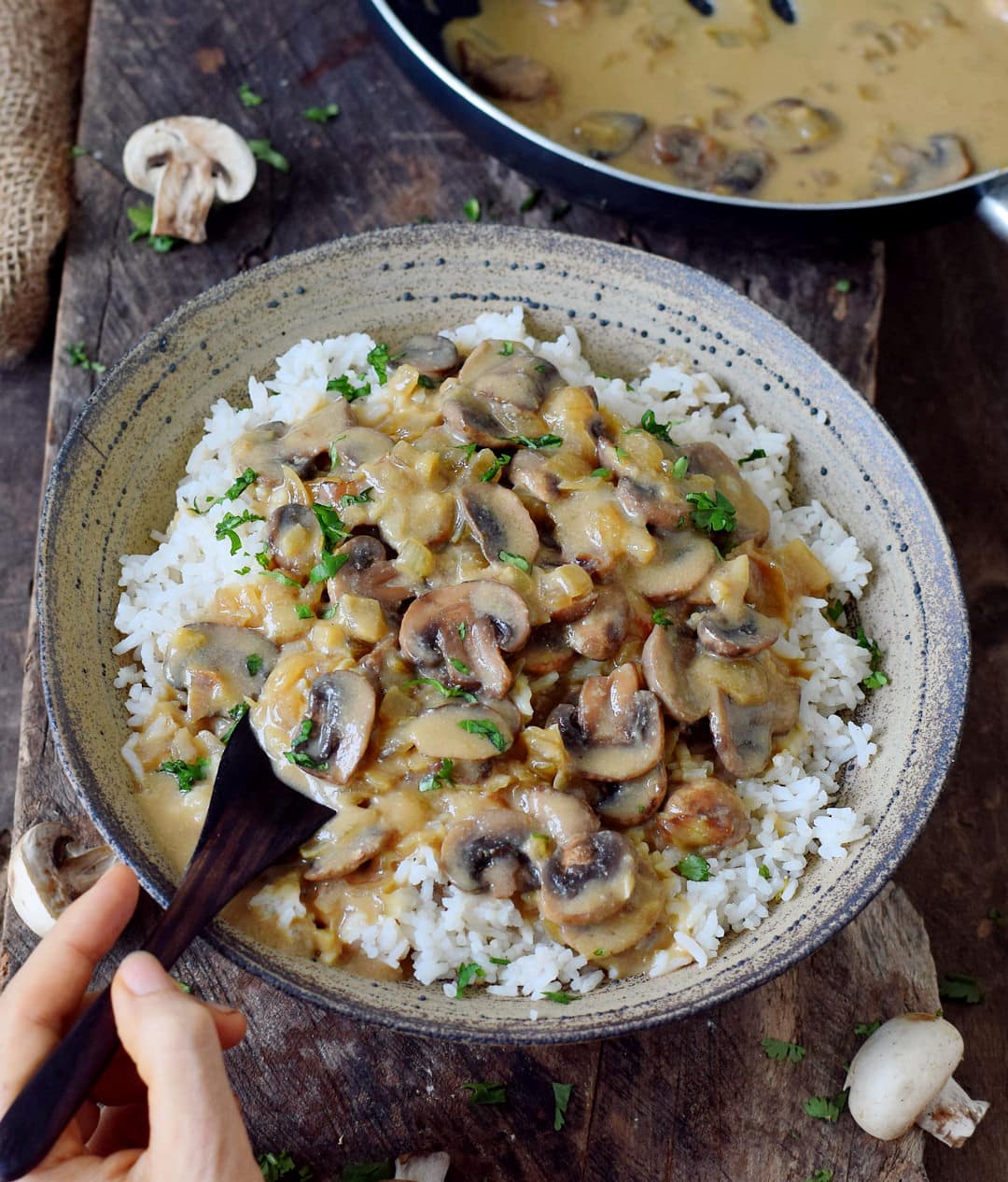 You also might want to check out some of my other vegan mushroom recipes:

If you make this scrumptious Vegan Mushroom Stroganoff recipe, let me know in the comments below or tag me in your Instagram/Facebook posts with @elavegan and #elavegan! 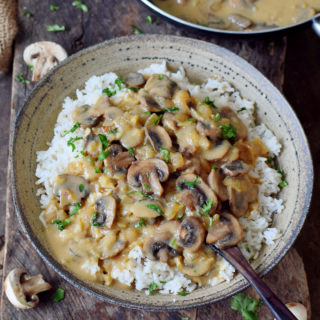