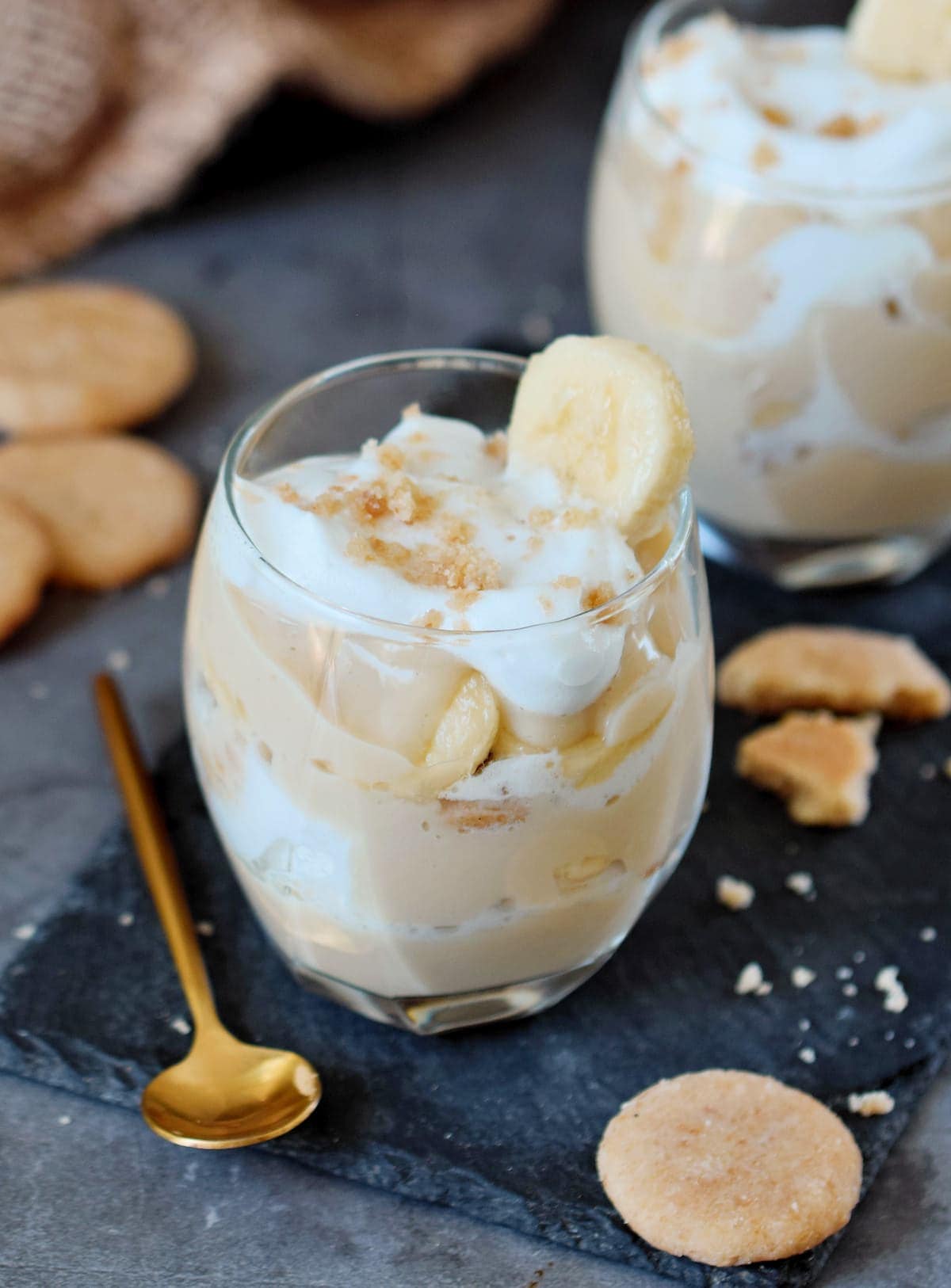 Recently I posted my recipe for Gluten Free Vanilla Wafers – with this vegan banana pudding in mind. It is everything you remember about the classic dish – but minus all the dairy, eggs, and gluten! If you love banana cream pie, you’ll also fall in love with this dessert! 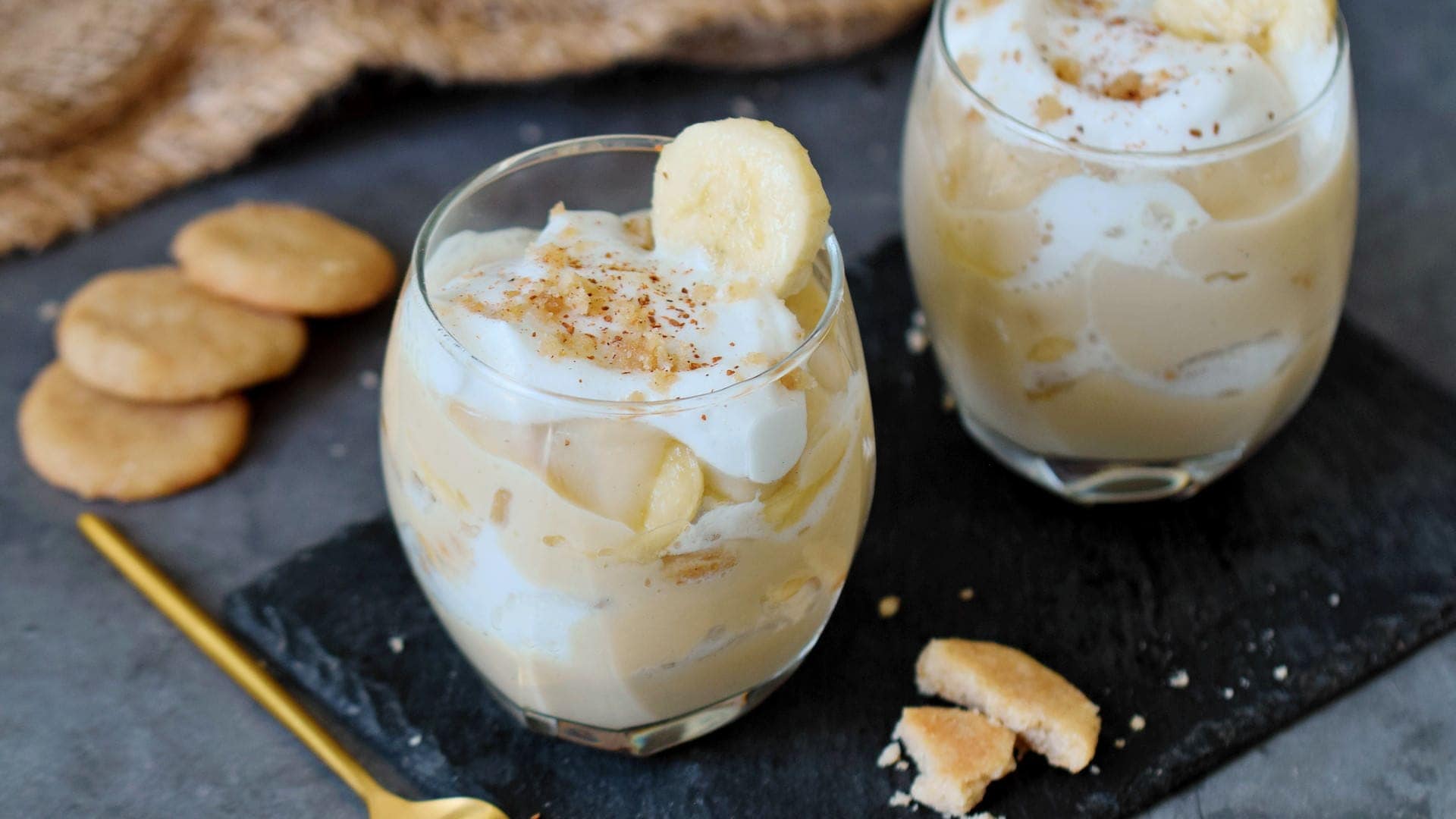 What Is Banana Pudding?

Traditionally, this American dessert is made with layers of vanilla custard/pudding, wafer cookies, fresh bananas, and topped with cream or toasted meringue. In terms of looks, the pudding reminds me of a layered trifle or Vegan Tiramisu but packed with sweetness and banana.

If you’ve never tried a Southern banana pudding before, you might be confused about the fact that, surprisingly, this dessert isn’t a banana-flavored pudding. I thought I’d get that out of the way immediately since it’s a common misconception. But don’t worry, it’s still ridiculously delicious!

As with lots of Southern recipes, this dairy free banana pudding is comfort food at it’s finest; creamy, rich, decadent, and packed with flavor. 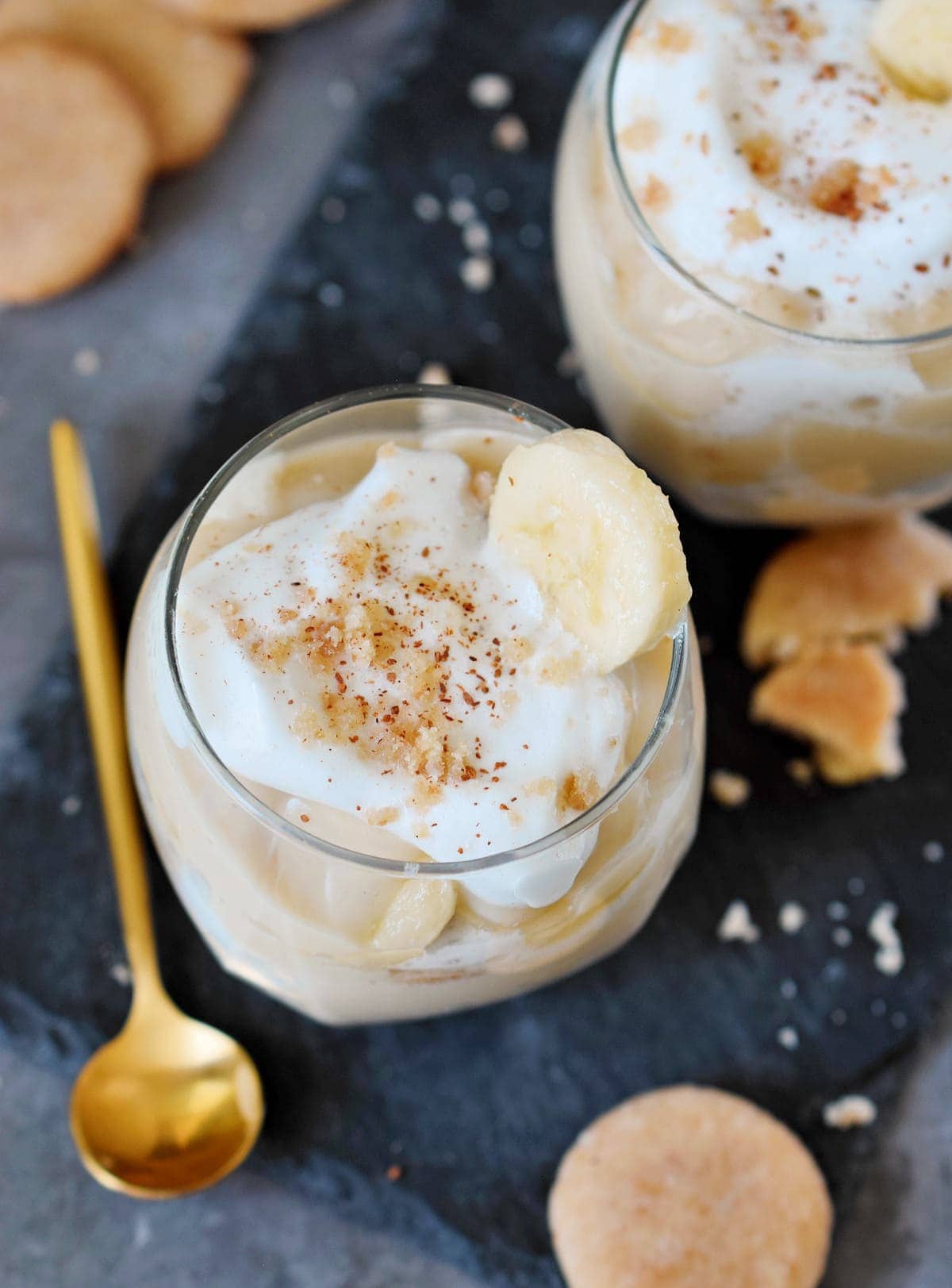 This recipe is made up of just four elements (and 10 total ingredients) for a dessert set to impress without keeping you cooped up in the kitchen for hours on end.

Bananas: Use ones that are ripe but not overripe. You want them to be easily sliced through but not mushy.

Vanilla Pudding: I added a cheeky couple spoonful’s of peanut butter too, for extra flavor. Though, this can be subbed for alternate flavors and a nut-free version (check notes).

Vanilla Wafer Biscuits: Small, crisp, and vanilla-infused. I love to use homemade for the perfect texture.

Whipped Cream: Lightly sweetened and vanilla-infused. However, you could also use vanilla meringue topping instead.

Read my Ingredient Notes section for a full list of ingredient substitutes and options- including how to make a nut-free, sugar-free, gluten free banana pudding, etc. 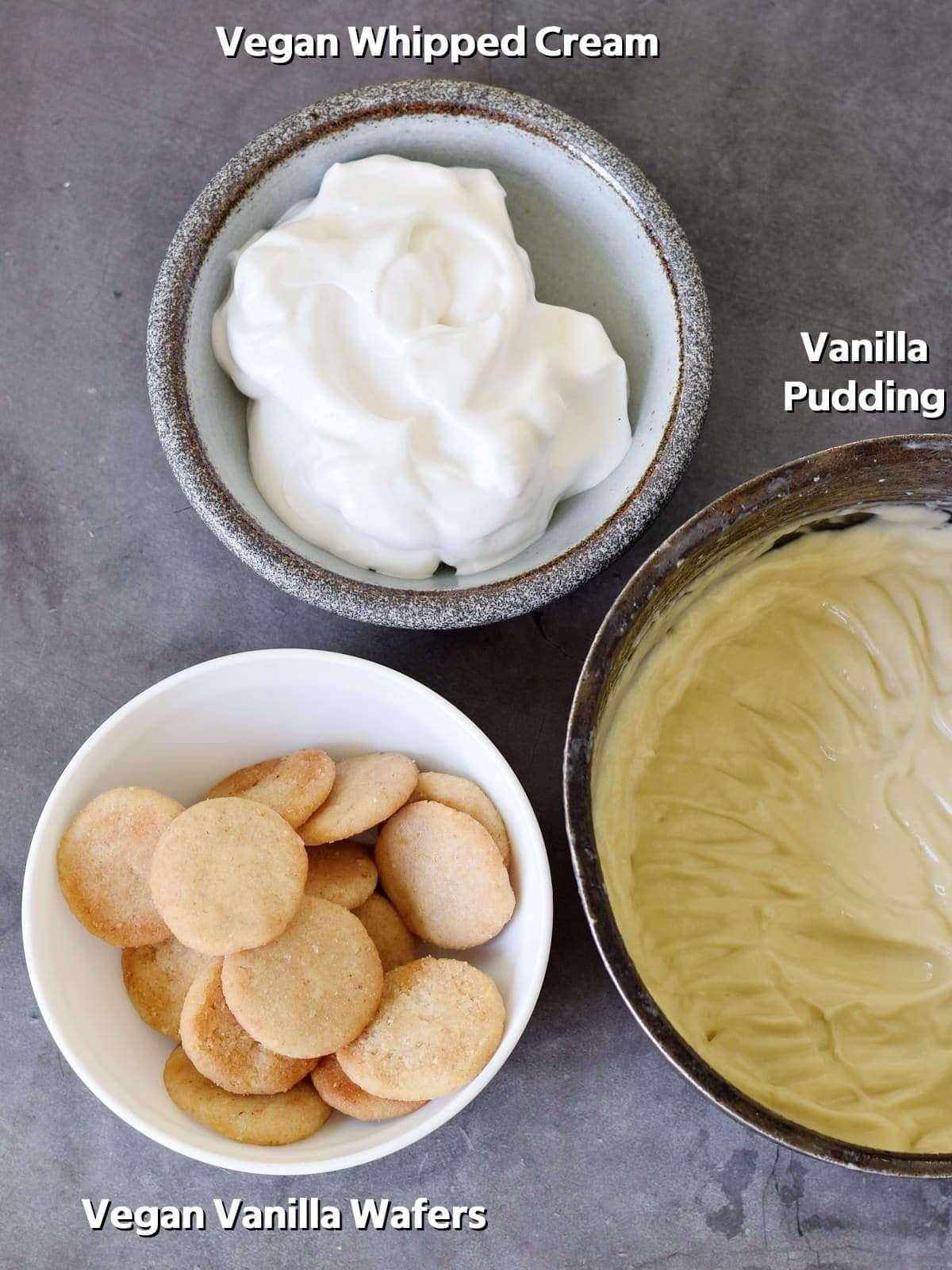 For this recipe, I used homemade vegan vanilla wafer cookies, so those will need to be pre-made (unless you choose to use a store-bought option). Otherwise, there are just 3 elements to prepare for this recipe and a few super-simple steps.

For the full ingredients list, ingredient measurements, and nutritional information, then please read the printable recipe card below.

First, combine all the pudding ingredients except the vanilla extract into a medium-sized saucepan. Whisk, without heat, until the cornstarch has dissolved. Then turn on the heat and bring to a boil over medium heat, stirring frequently.

Then, once it’s boiling, reduce the heat to low and whisk continuously for two to three minutes. During this time, the pudding will thicken and become very creamy.

Remove from the heat and stir in the vanilla extract. Cover the pudding with plastic wrap to avoid a film of skin forming on the top of the pudding and allow it to cool for 10-15 minutes. 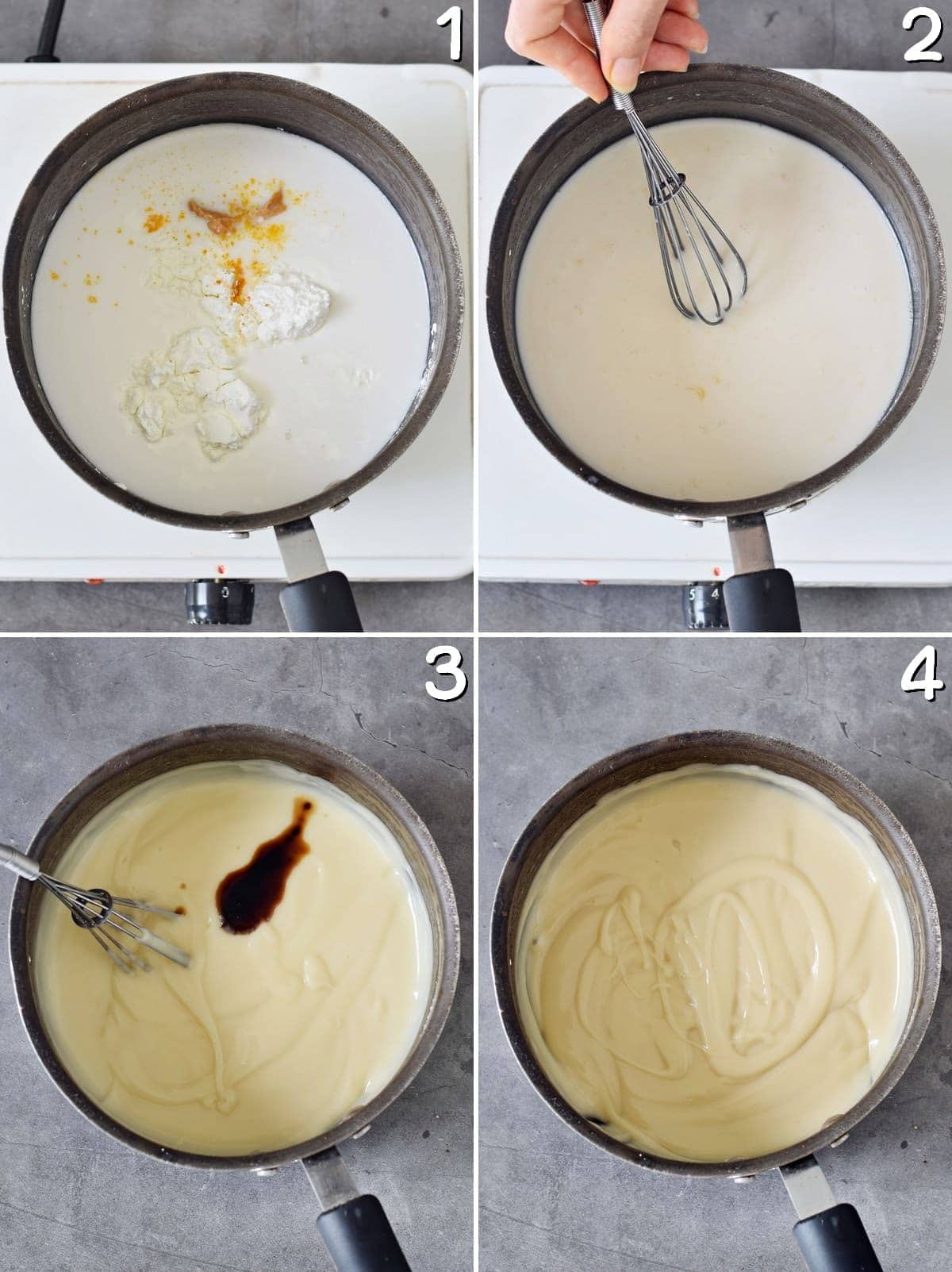 As the pudding cools, whip up the vegan whipped cream (read notes). You’ll need around ½ cup to just dollop on top, or more if you want to create additional cream layers. At the same time, thinly slice the bananas.

Depending on the size of your jars, you should be able to fill 2-4 jars.

Enjoy the dessert immediately if you prefer crisp cookies. Alternatively, allow it to chill in the fridge for a few hours to infuse the flavors more and for softer cookies. 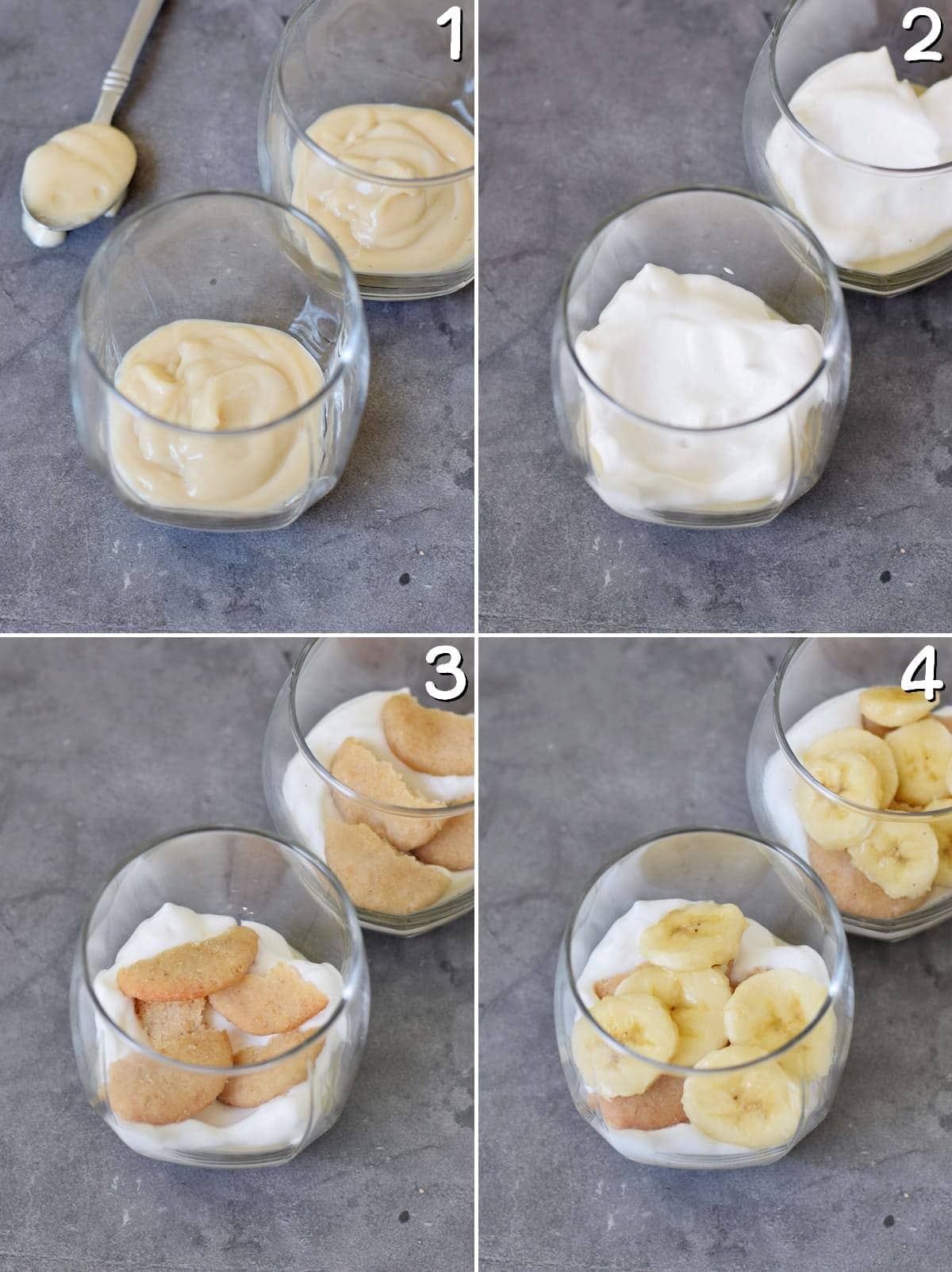 This vegan banana pudding can be stored in the fridge for up to 3 days when covered. You can also freeze the dessert for up to 2 months. 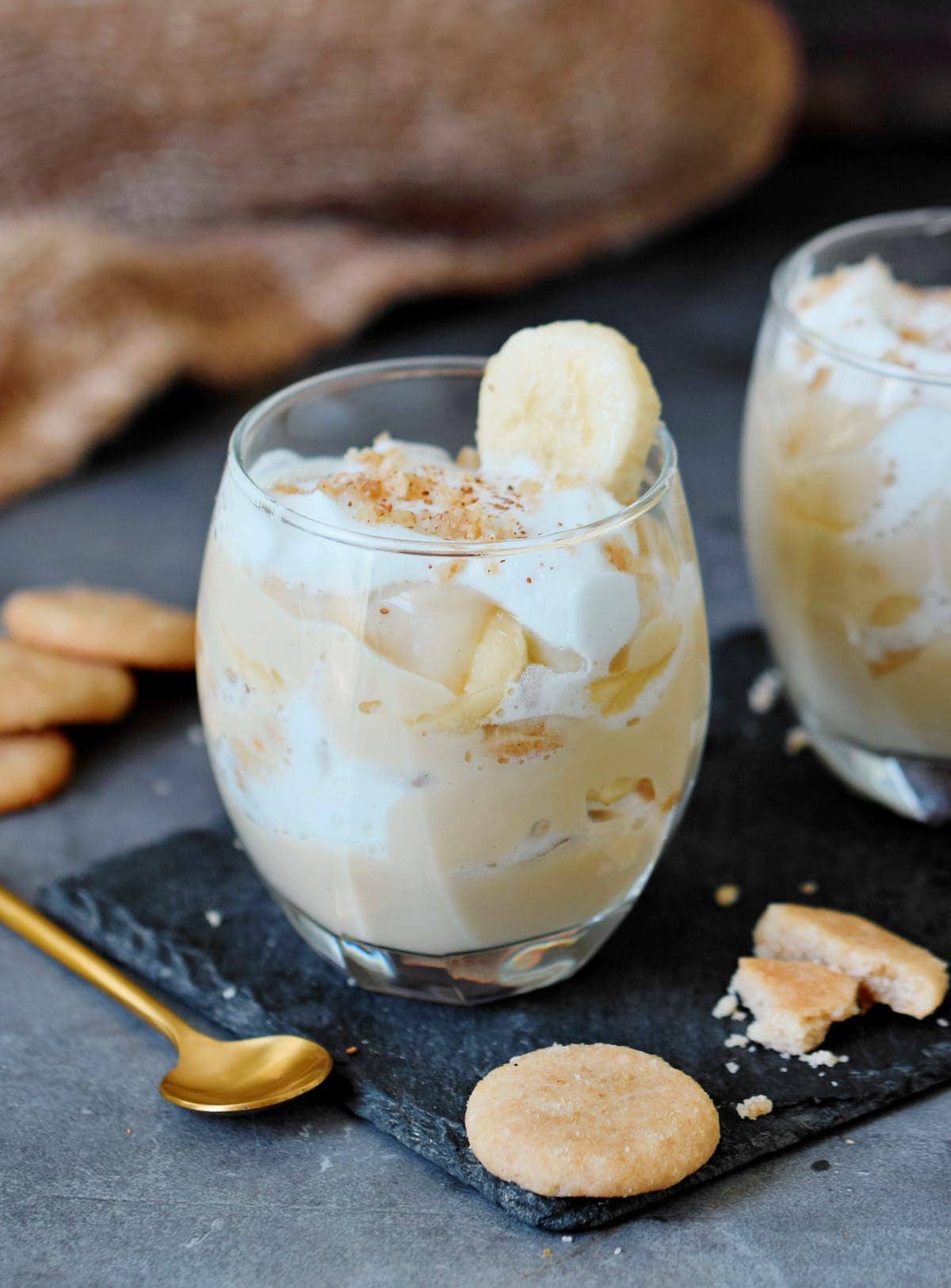 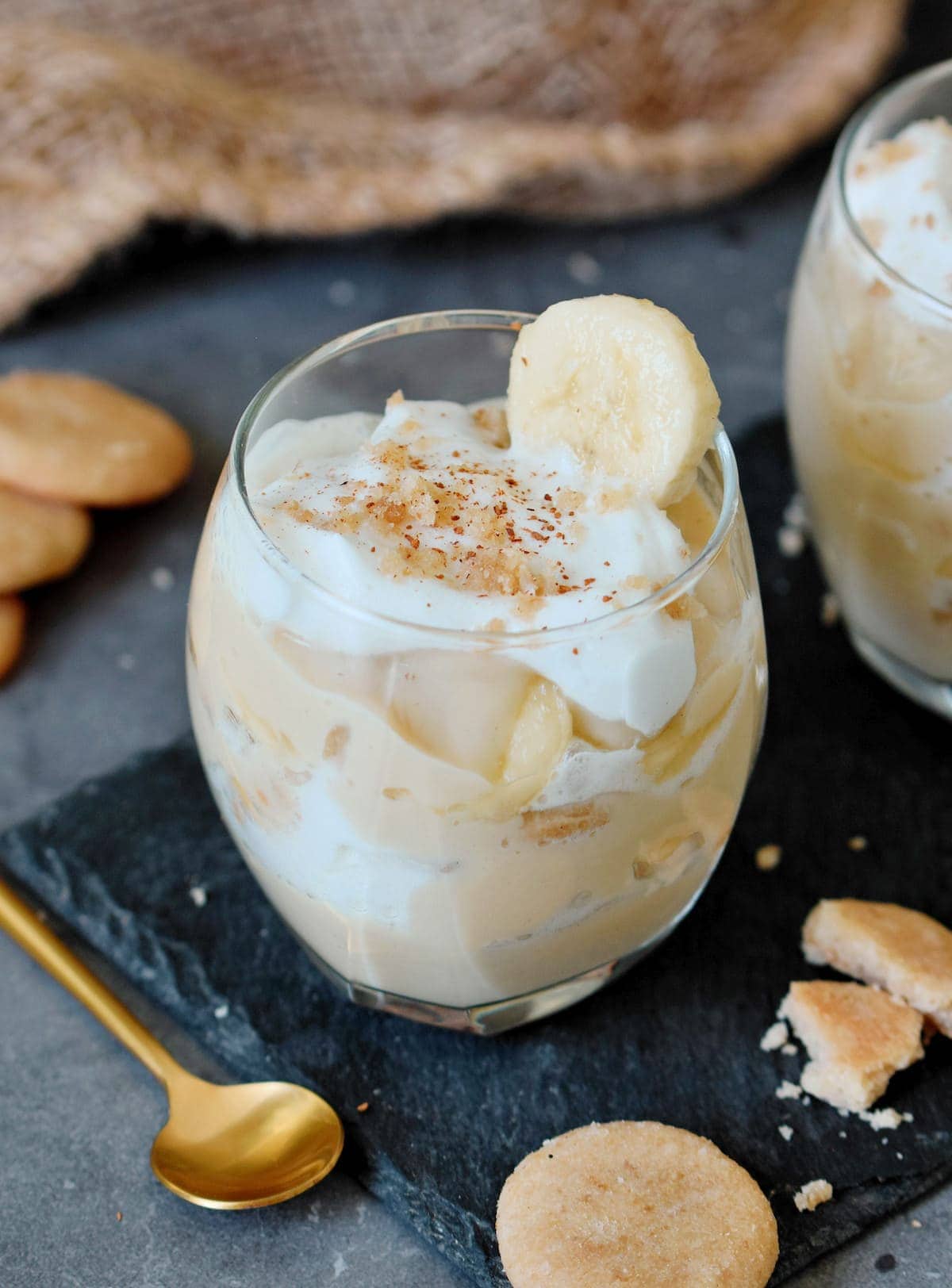 If you give this vegan banana pudding recipe a try, I’d love a comment and recipe rating below. Also, don’t forget to tag me in re-creations on Instagram or Facebook with @elavegan and #elavegan – I love seeing your recreations. 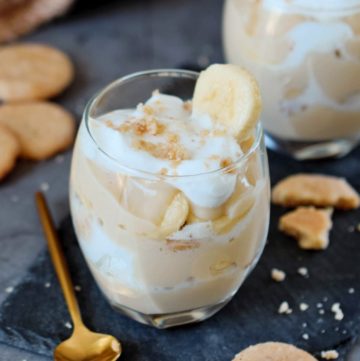