Steamed yeast dumplings (also known as Dampfnudel in Germany or Germknödel in Austria). These delicious yeast rolls are filled with plum jam, topped with poppy seeds and vanilla sauce. Great dessert or breakfasst which is vegan, gluten-free, and easy to make! 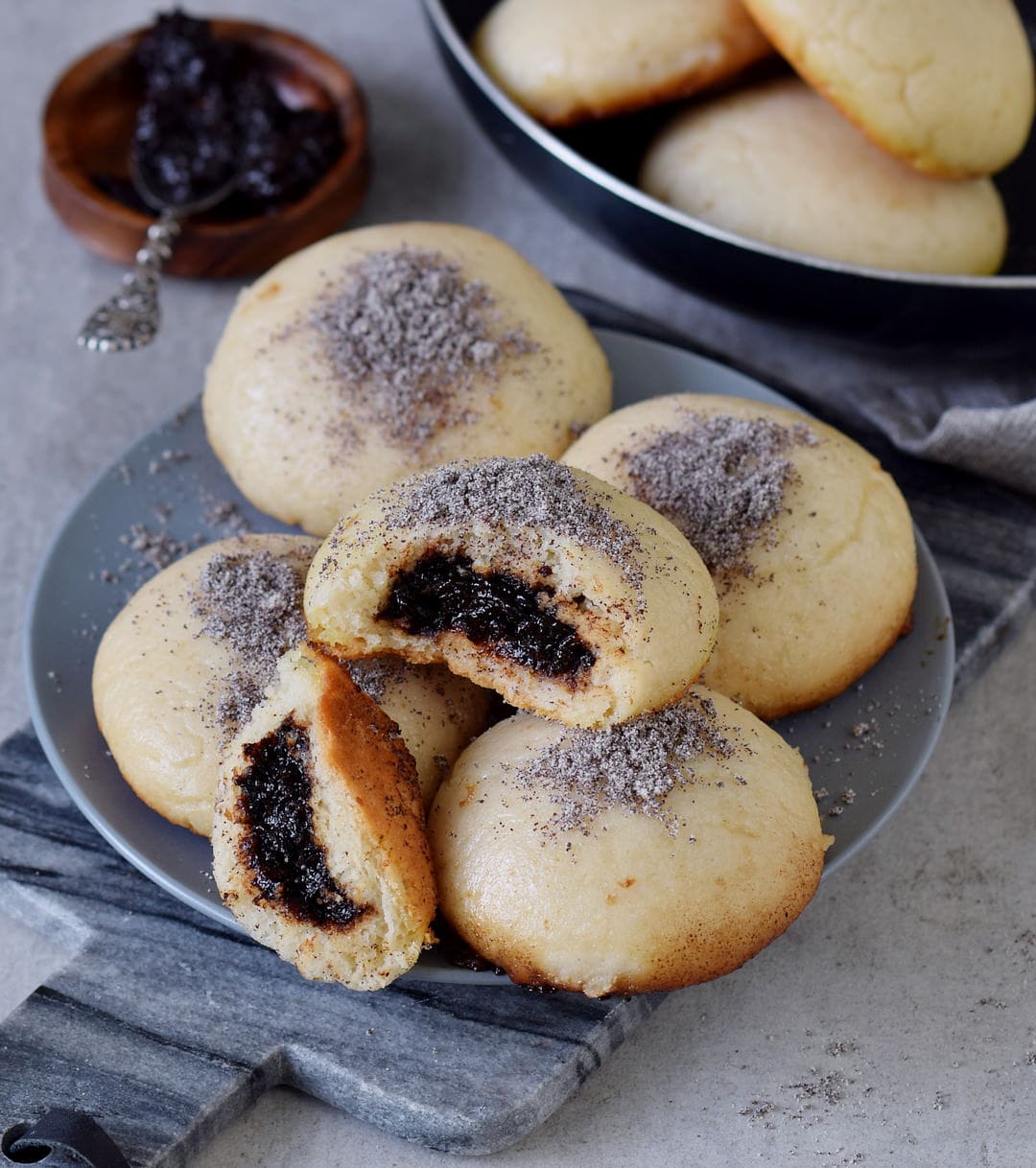 Have you ever heard of German Dampfnudel? Or maybe you are familiar with the word Germknödel? That’s how people from Austria call this delicious dessert. If you never tried them, well, you really should because you don’t want to miss this incredible dish. Steamed yeast dumplings are a traditional dessert from South Germany and Austria but they are also very popular in the Czech Republic, and in Poland. 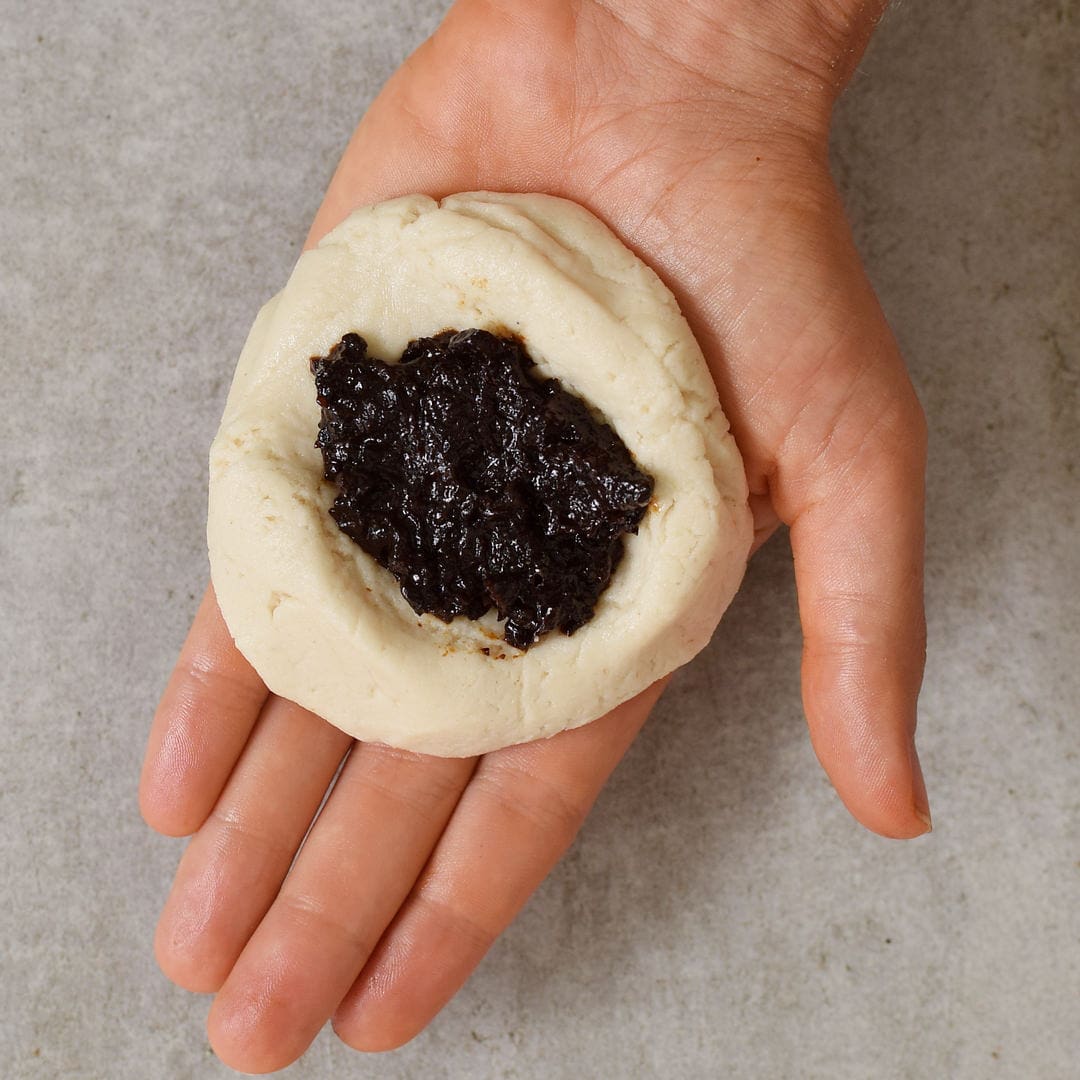 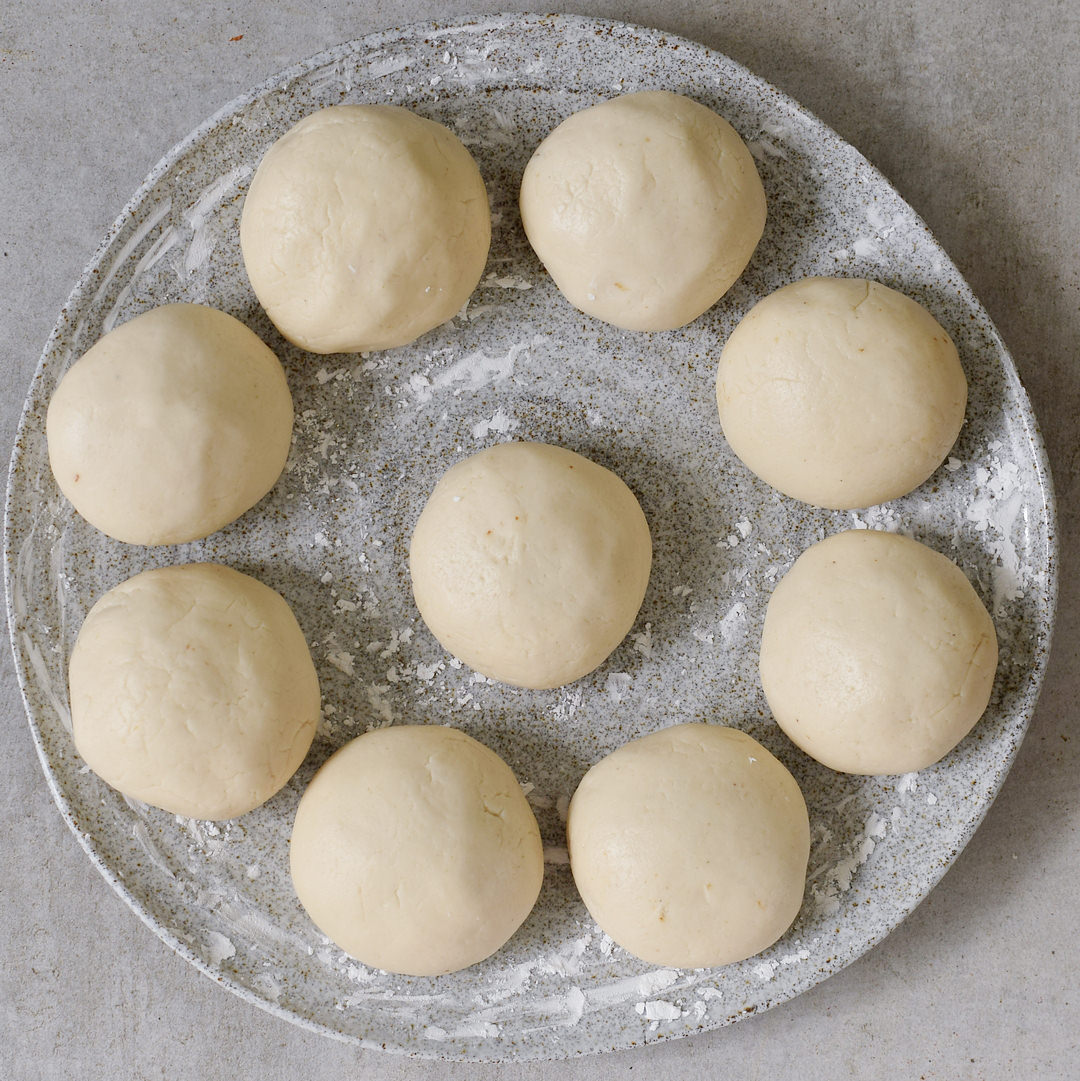 These steamed dumplings are special since they are not only vegan but also gluten-free. And to be honest, it’s pretty hard to make vegan AND gluten-free desserts which include yeast. Most yeast buns are either vegan or gluten-free because working without gluten and eggs isn’t the easiest thing, however, it IS doable. And yes, maybe the outcome with gluten/eggs would have been a bit better but I want to show you that you can make tasty desserts even without eggs, dairy, and gluten. 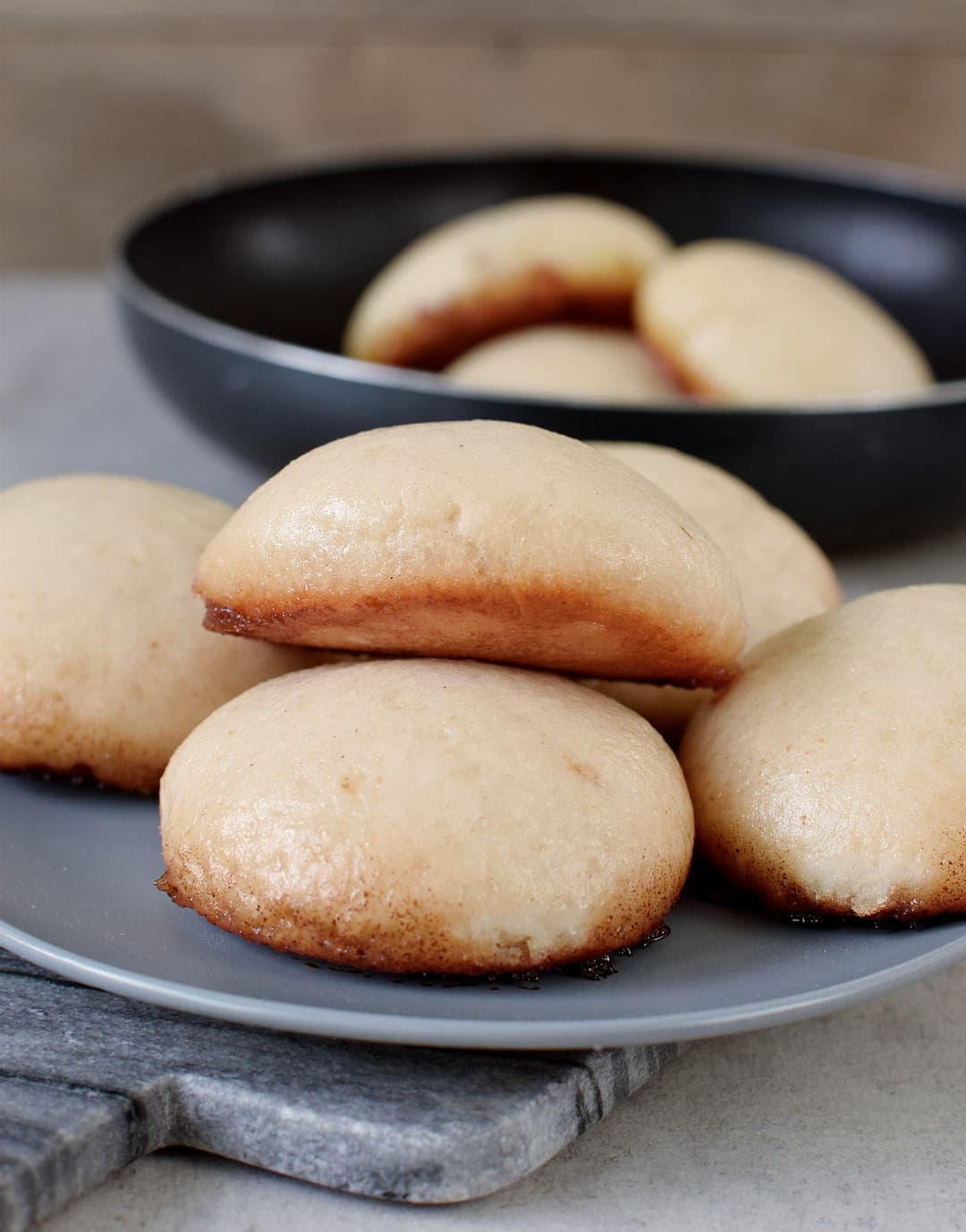 I filled these German Dampfnudel with plum jam, however, you can use any filling which you like. Blueberry compote tastes delicious (I already tried it out and posted a photo on my Instagram account). You can also leave out the filling completely! Actually it’s not unusual to leave these steamed yeast dumplings unfilled but in my opinion, a fruity filling makes them even better. Plum jam/jelly is a popular one and so is apricot jam. You can also make them savory (leave out the sugar) and fill them with something hearty! But I must admit I never tried it out yet.

I am even thinking about to fill them with chocolate since I am a chocoholic, haha. Maybe they would turn out as delicious as my chocolate stuffed pancakes. 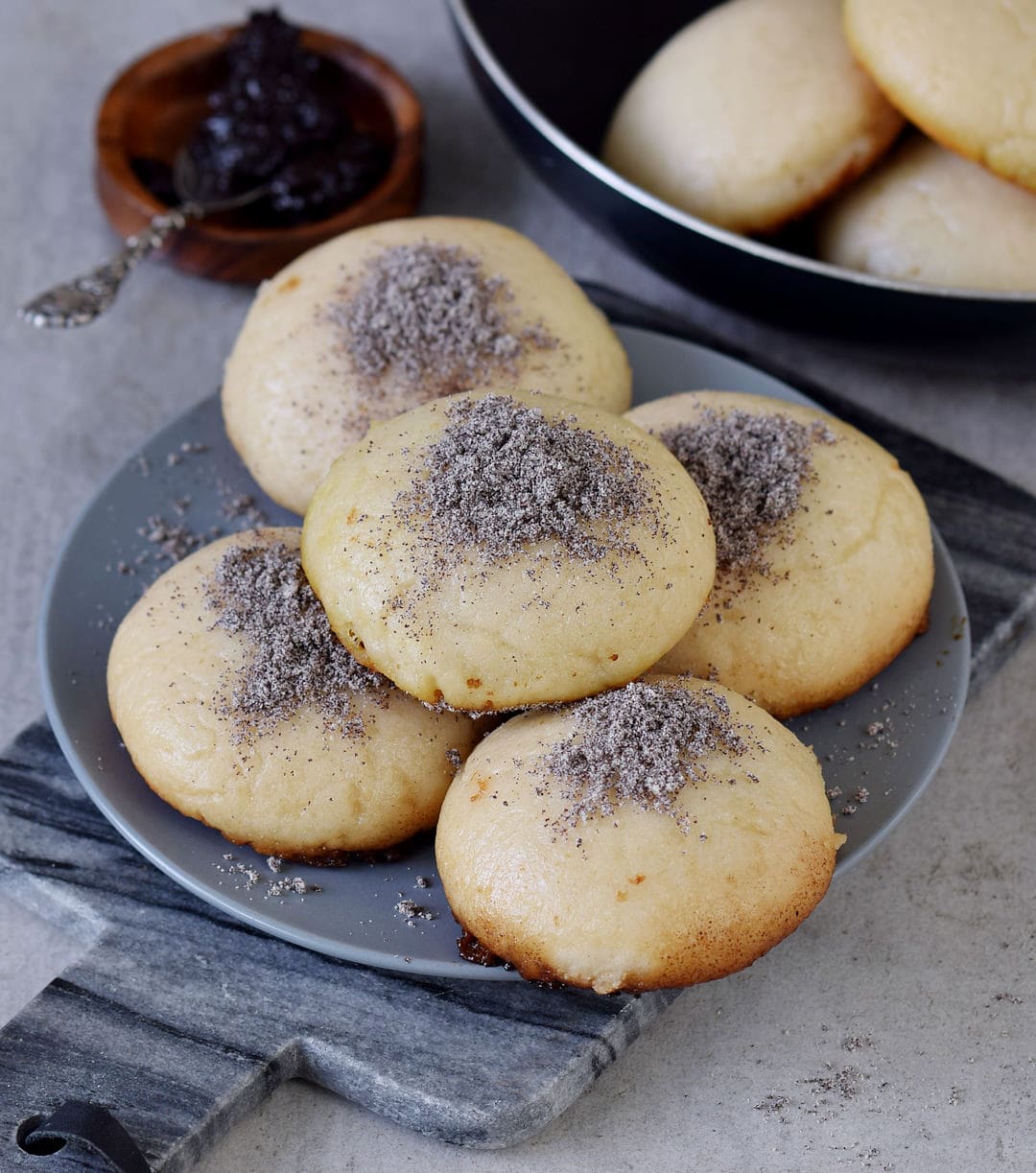 How To Make Sweet Yeast Rolls

Steamed yeast dumplings have a shiny white top and a brown salty crust bottom. That crust is actually very special and tasty. It will form when you cook them in a pan/skillet with a little bit of oil, water, and 1/3 tsp of sea salt. You need to put a lid on the pan and cook them for 25 minutes. Don’t lift the lid during that time. You will hear it when they are ready because all the water will evaporate and the crust will form. 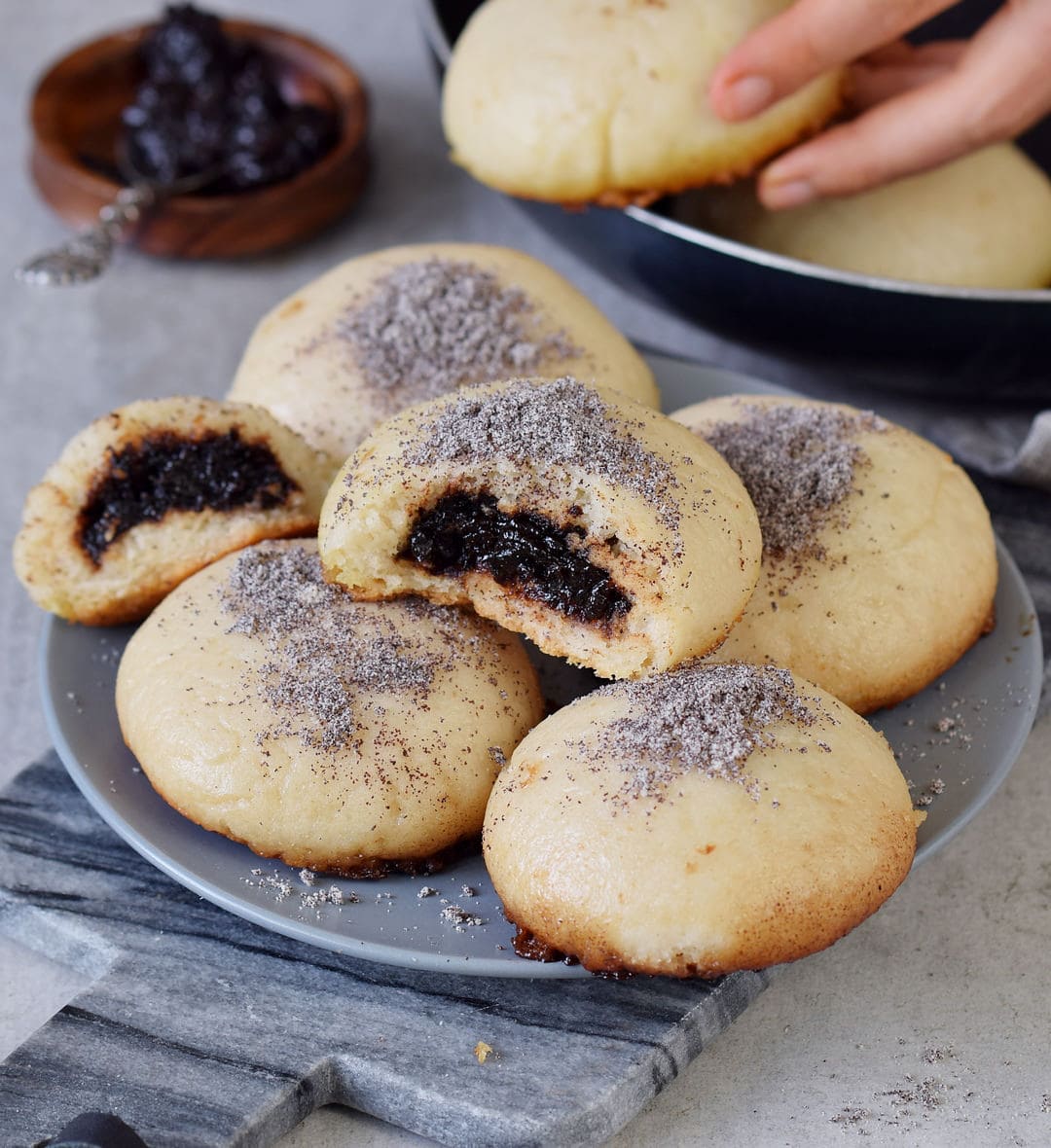 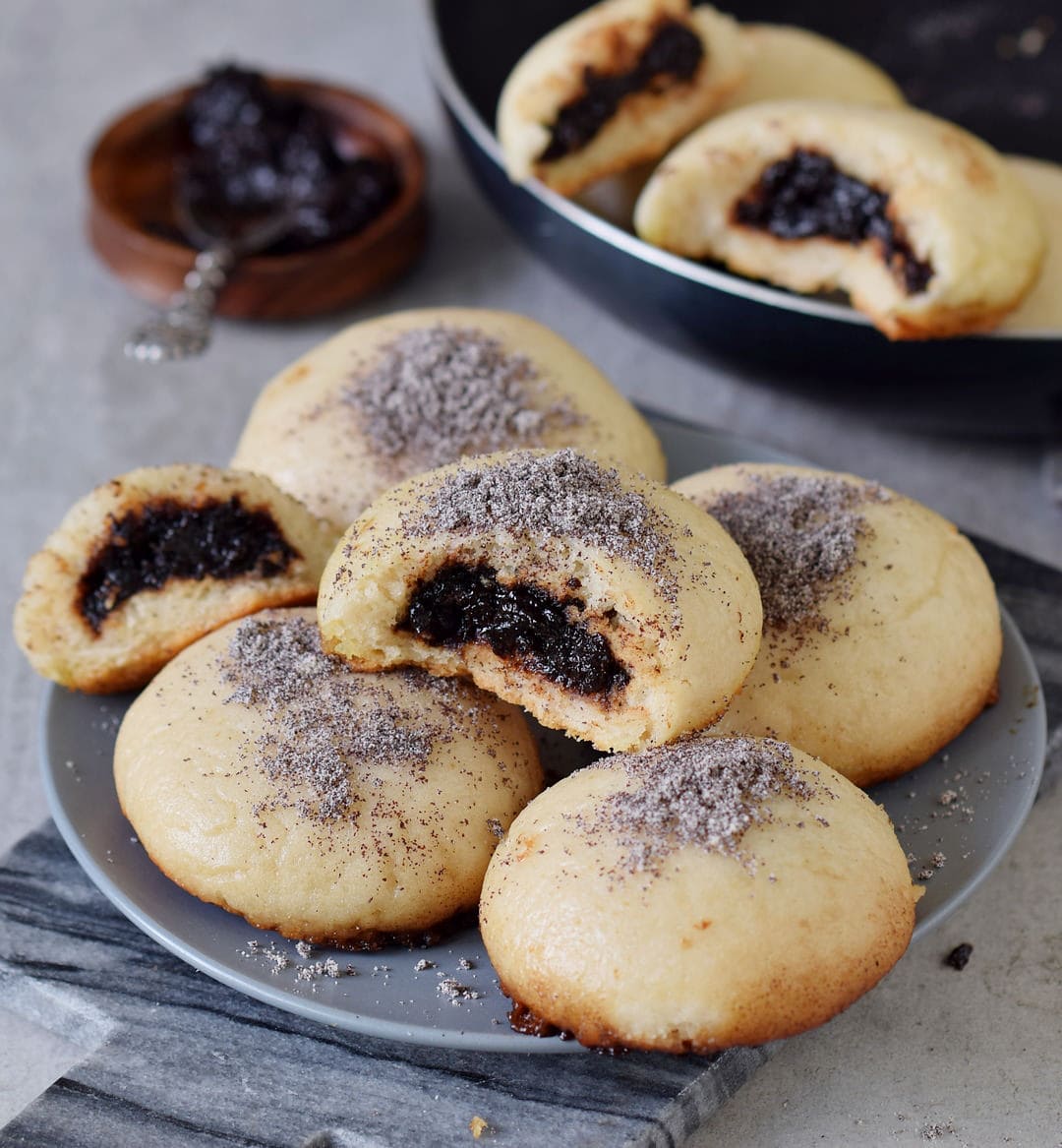 These Stuffed German Yeast Dumplings Are: 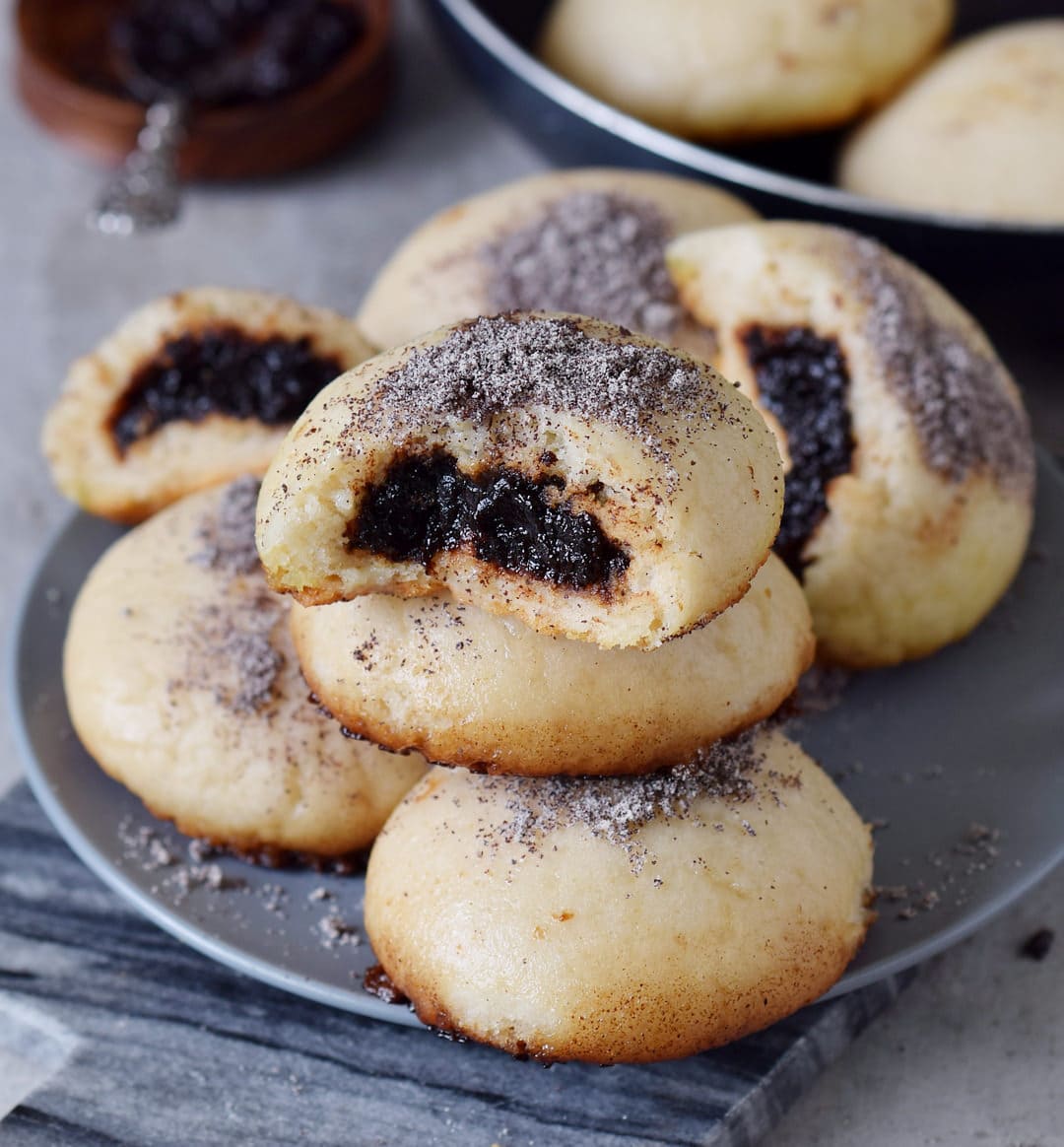 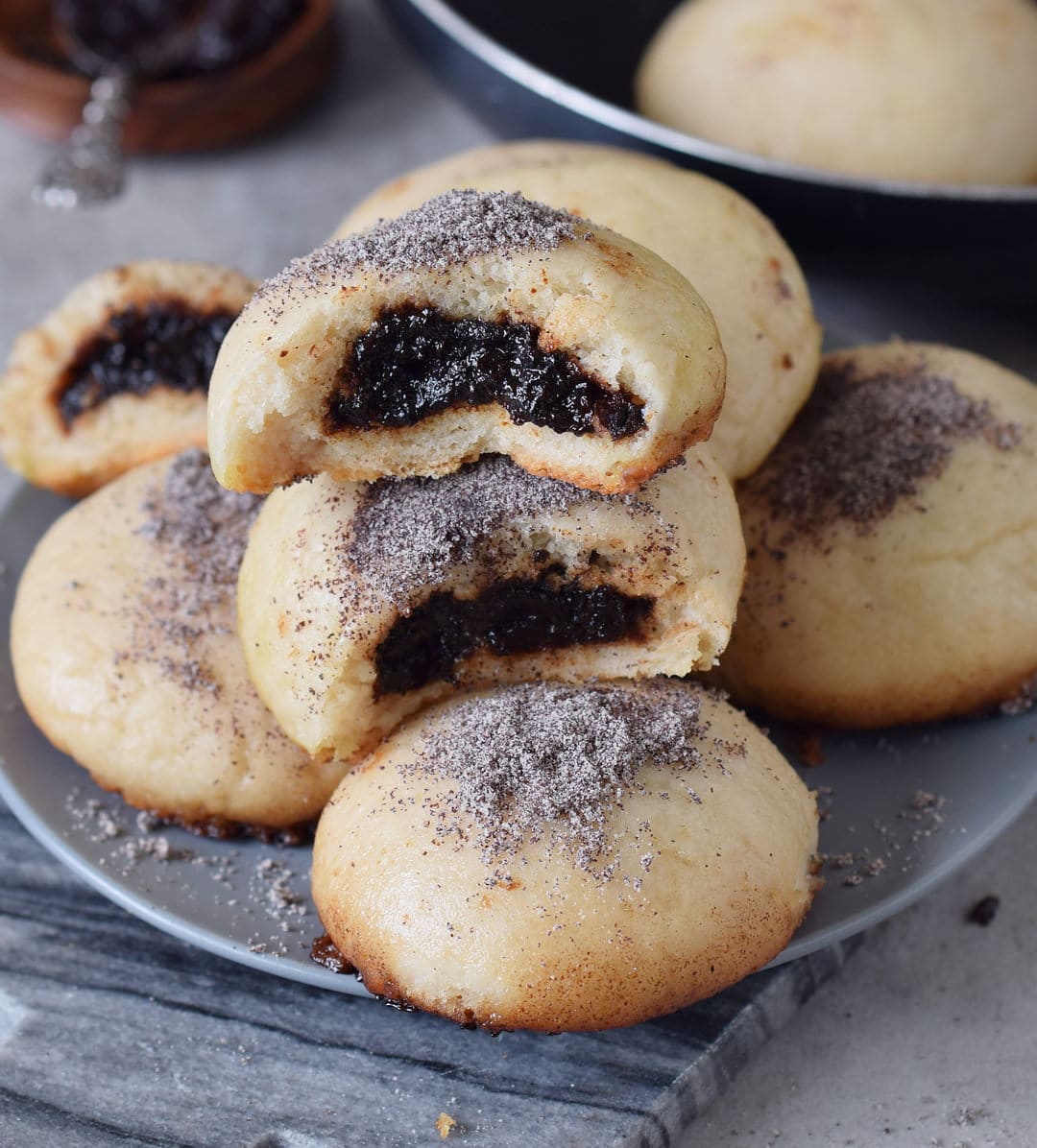 Give them a try!

It’s so funny that most people (who aren’t from Germany, Austria, Czech Republic, and Poland etc.) never heard of Dampfnudel, steamed donuts, or steamed yeast dumplings before. It’s such a popular dish in some European countries and in my opinion, it should become more popular in the US and many other countries. I love to top them with poppy seeds and vanilla sauce. That’s how I am used to eating these delicious sweet dumplings. 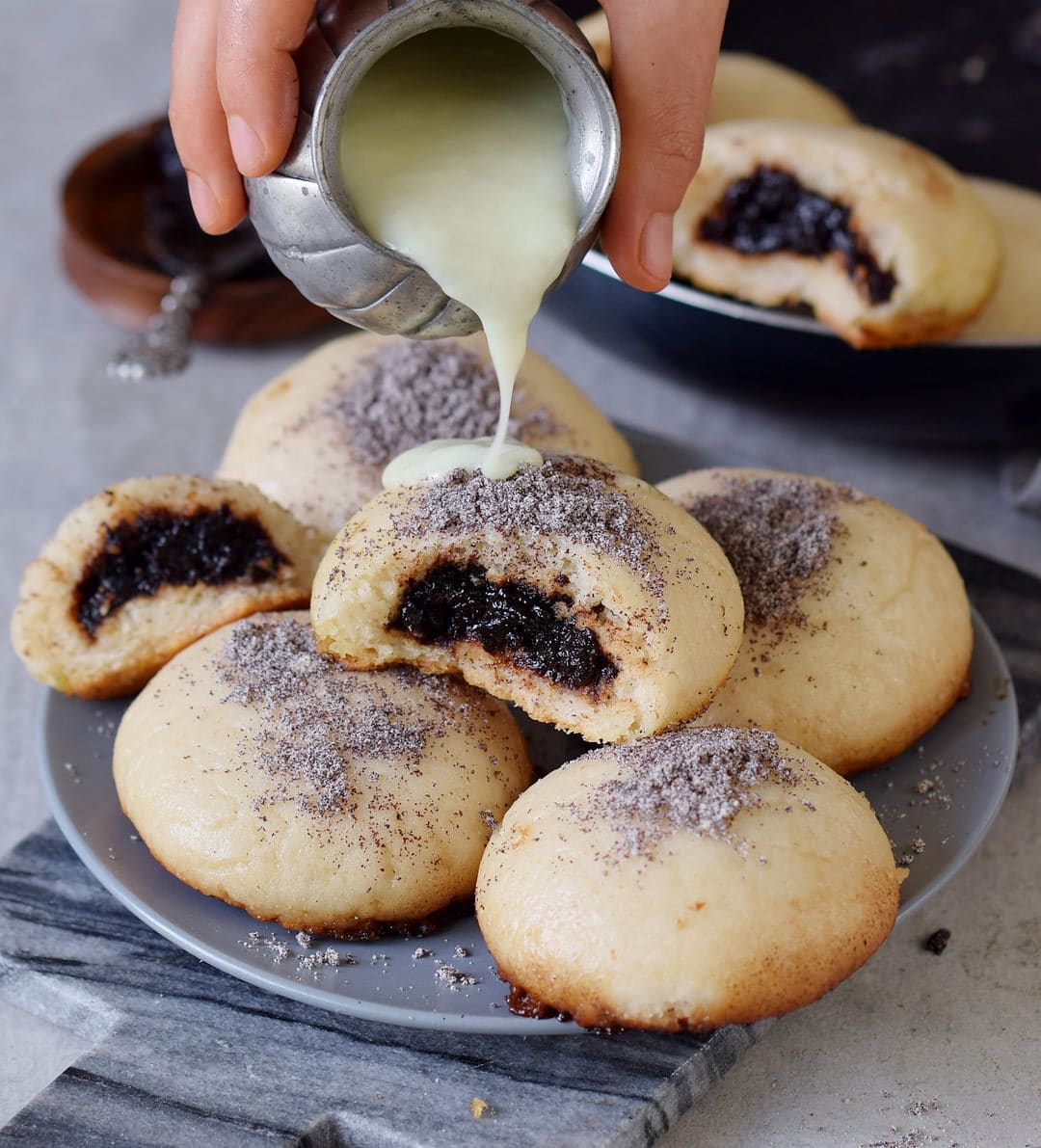 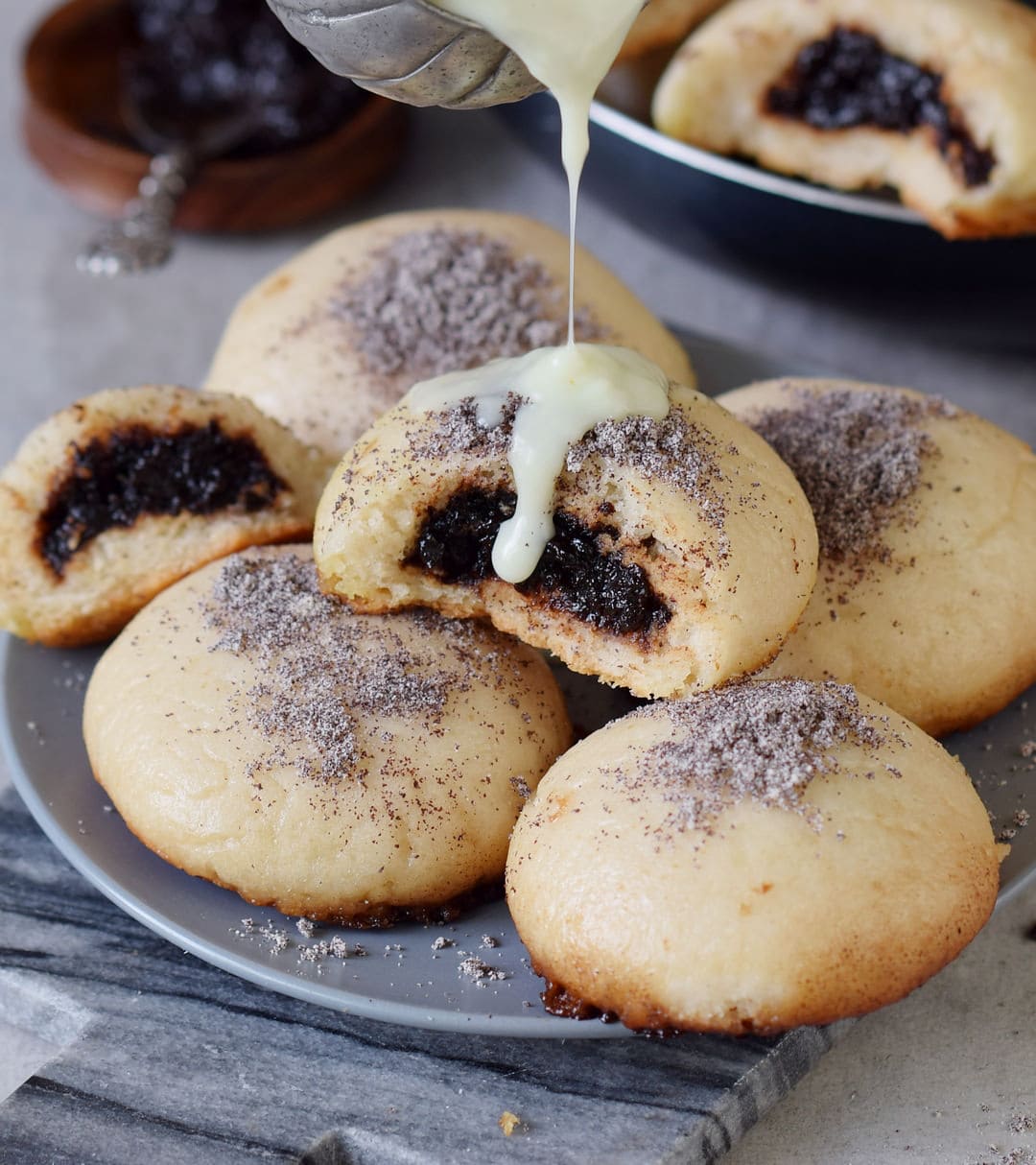 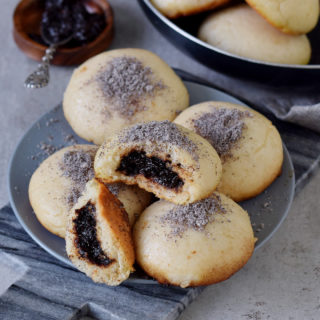 I used this gluten-free flour mixture:   Recipe vanilla sauce:   Bring all ingredients in a saucepan to a boil and let simmer for a few minutes.   The steamed yeast dumplings taste best when you serve them immediately. You can store leftovers in the fridge (covered). They will become a little bit dry the next day (which is normal because of the gluten-free flour) but you can simply steam them again for 3-4 minutes with a tiny bit of water, and they will be soft again.
Nutrition Facts
Yeast Dumplings
Amount per Serving
Calories
378
% Daily Value*
Fat
12
g
18
%
Saturated Fat
1
g
5
%
Carbohydrates
66
g
22
%
Fiber
8
g
32
%
Sugar
21
g
23
%
Protein
6
g
12
%
* Percent Daily Values are based on a 2000 calorie diet.