This gluten-free pita bread is tender, fluffy, and pillowy – all without the use of wheat! With just 5 ingredients (not including water, salt, and oil) and a simple process – you can make delicious, cost-effective flatbread at home that will have you ditching store-bought versions for good! 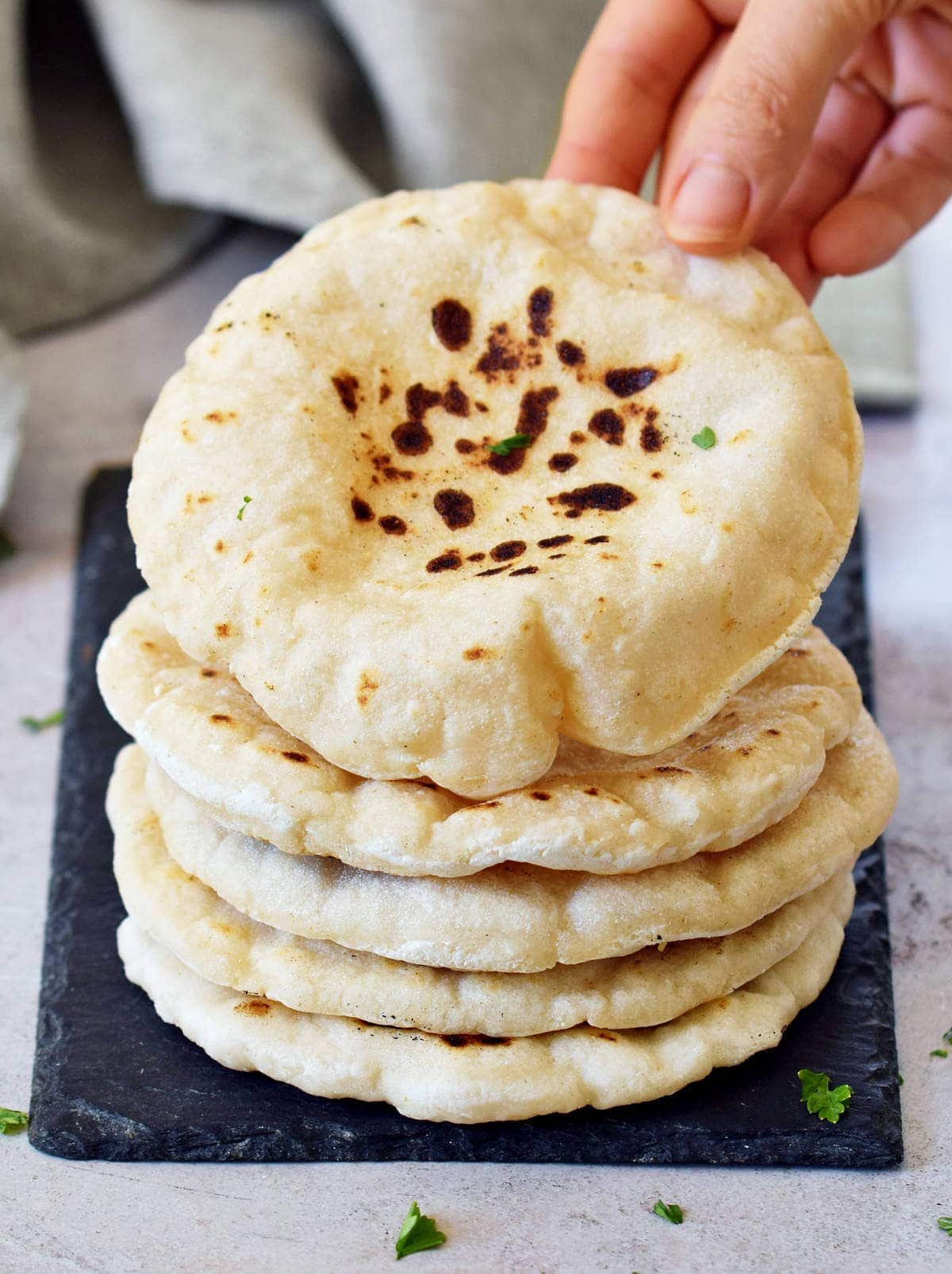 Having posted my naan recipe recently, I’m really getting into the spirit of home-baked GF bread, especially simple gluten-free flatbread style recipes like this pita bread (Pitta for those in the UK).

What is pita? Pita bread actually refers to a family of flatbreads that are yeast-leavened and originate in the Middle East and are also popular in the Mediterranean (e.g. Greece). There are several varieties, including the most common pita bread containing a pocket (aka pita pockets or Arabic/Syrian bread) which are perfect for stuffing with fillings. There are also thicker pocketless versions (similar to naan), used to serve alongside kebabs. 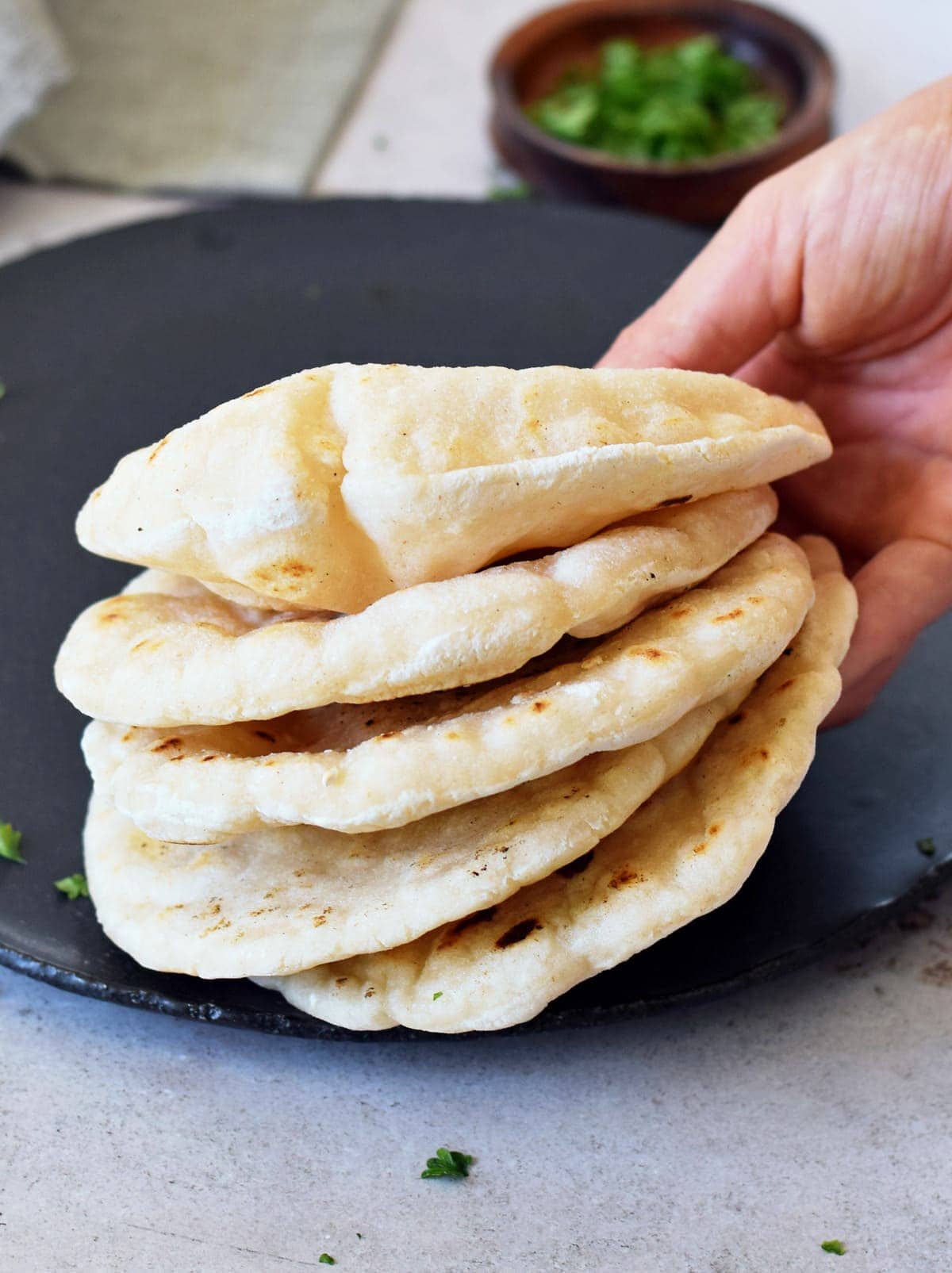 Pita is traditionally made with wheat flour and is known for being light and pillowy – not exactly qualities synonymous with gluten-free bread. Luckily, inspired by my gluten-free pizza dough recipe and with something to prove, I got myself in recipe testing mode and didn’t stop until I had this fluffy gluten-free, vegan pita bread recipe.

I was actually blown away by how much I was able to get the pita to puff up, but I also love how cost-effective they are. The ‘free from’ aisles in stores aren’t exactly known for being easy on the bank balance (I mean, have you noticed the price difference between wheat pita and gluten-free pita bread?!) and so making these simple items at home is a great way to enjoy foods you love in a lower-budget way.

More than that, though, if you’ve ever taken the time to actually look at the ingredients found in many grocery stores’ GF bread options, you’ll notice lots of very questionable additives and preservatives. In the end, you have to pay more for a product that usually doesn’t taste as good and is filled with ingredients that many would rather avoid. All the more reason to turn to this simple, natural, homemade pita bread recipe! 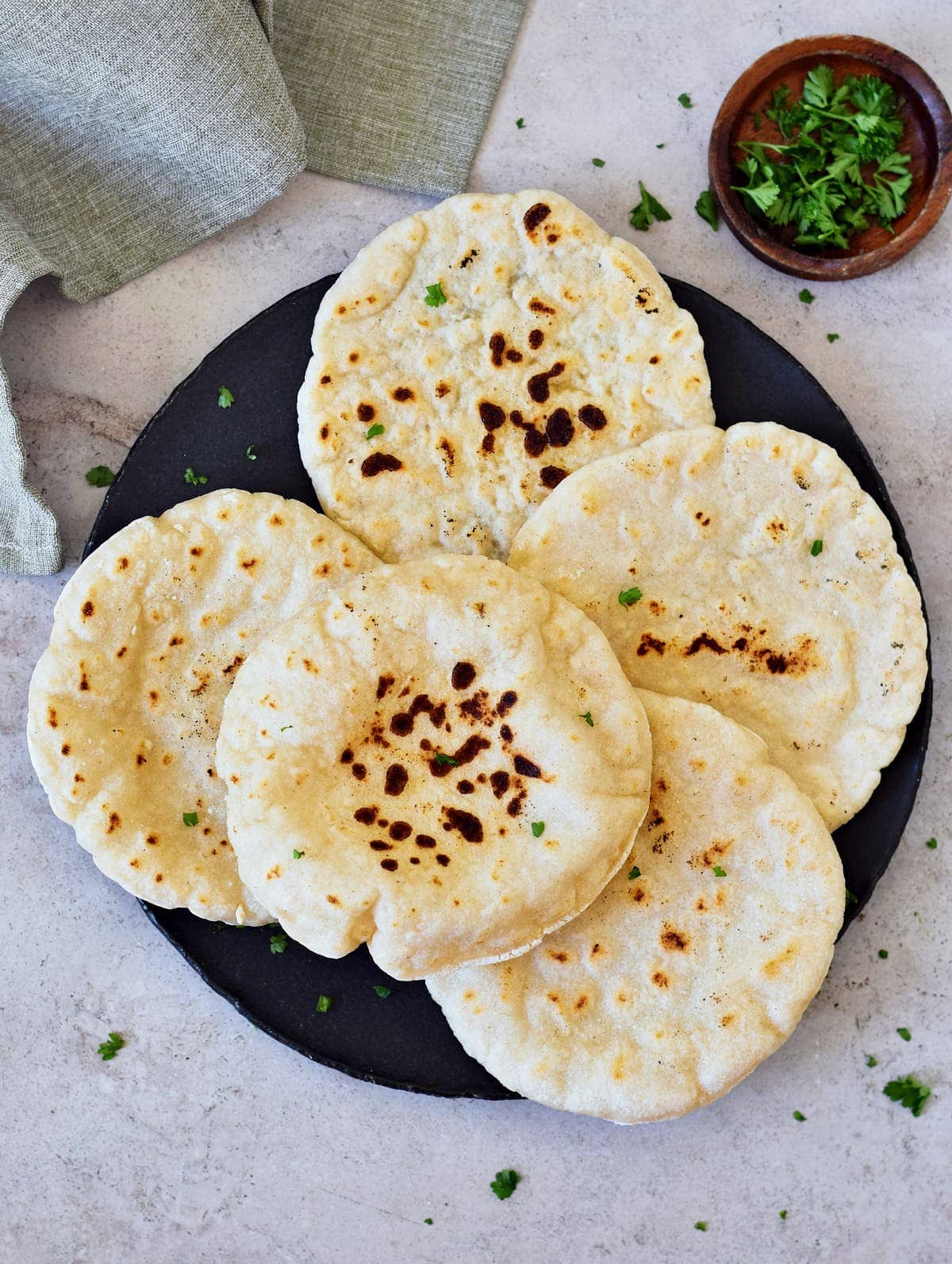 How To Make Pita Bread?

I’ve included basic step-by-step instructions just below. For the full ingredients list, measurements, complete recipe method, and nutritional information read the recipe card at the bottom of the post.

Heat your water to around 40°C (lukewarm), add the yeast, sugar, and stir well with a spoon. Then set aside for five minutes for the yeast to activate – it should begin to froth up and become slightly bubbly.

Combine all of the remaining dry ingredients in a large bowl and mix, then add the yeast mixture and oil and stir with a wooden spoon until combined. 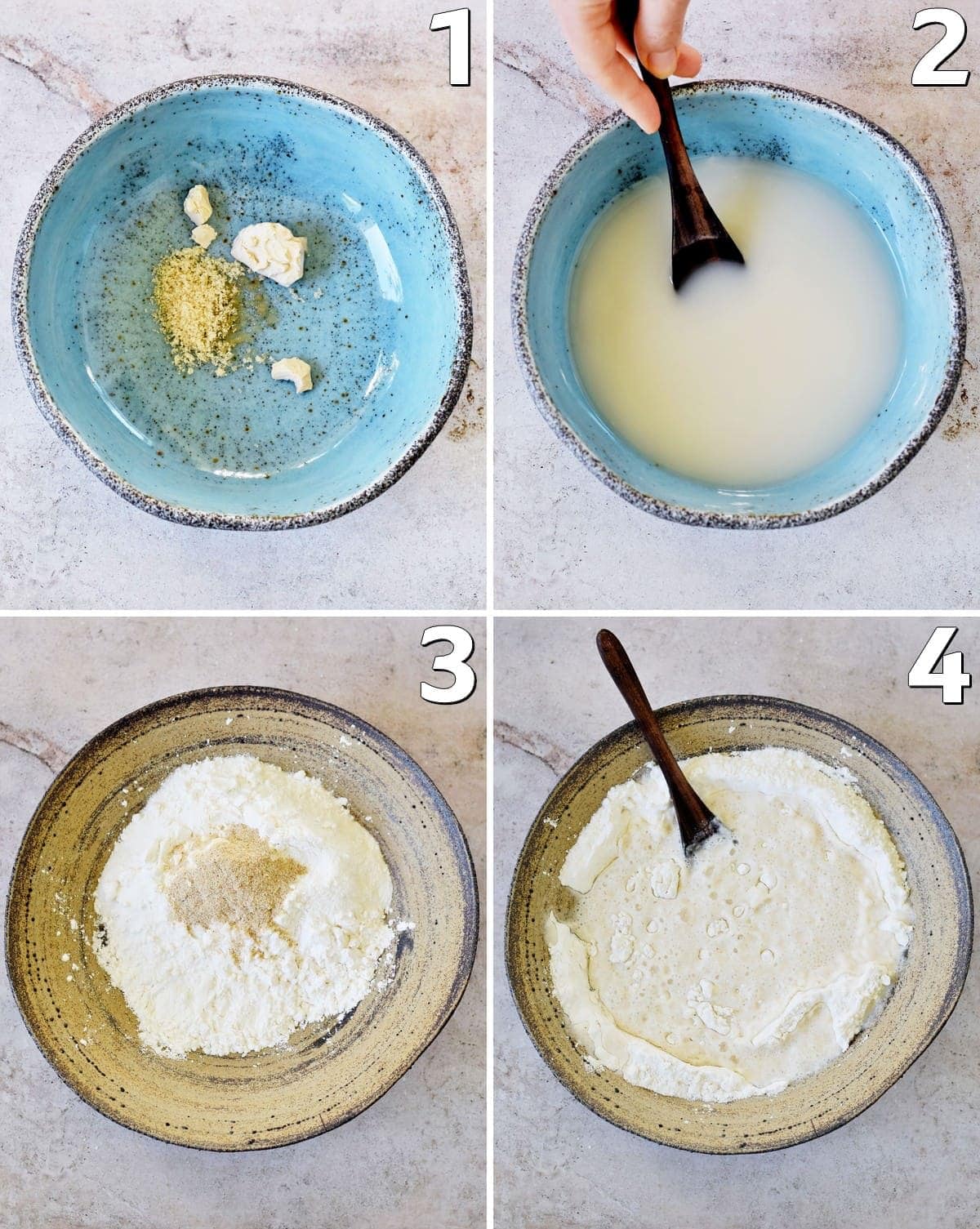 Knead it & allow it to rise

Knead the gluten-free dough for a few minutes, form a ball, and place it back into the bowl. Then, cover the bowl with cling film and allow it to rise in a warm area (preferably between 40-50°C) for 45-60 minutes.

Note: You could heat your oven for just a few minutes, then switch off and leave the dough in the warm oven. 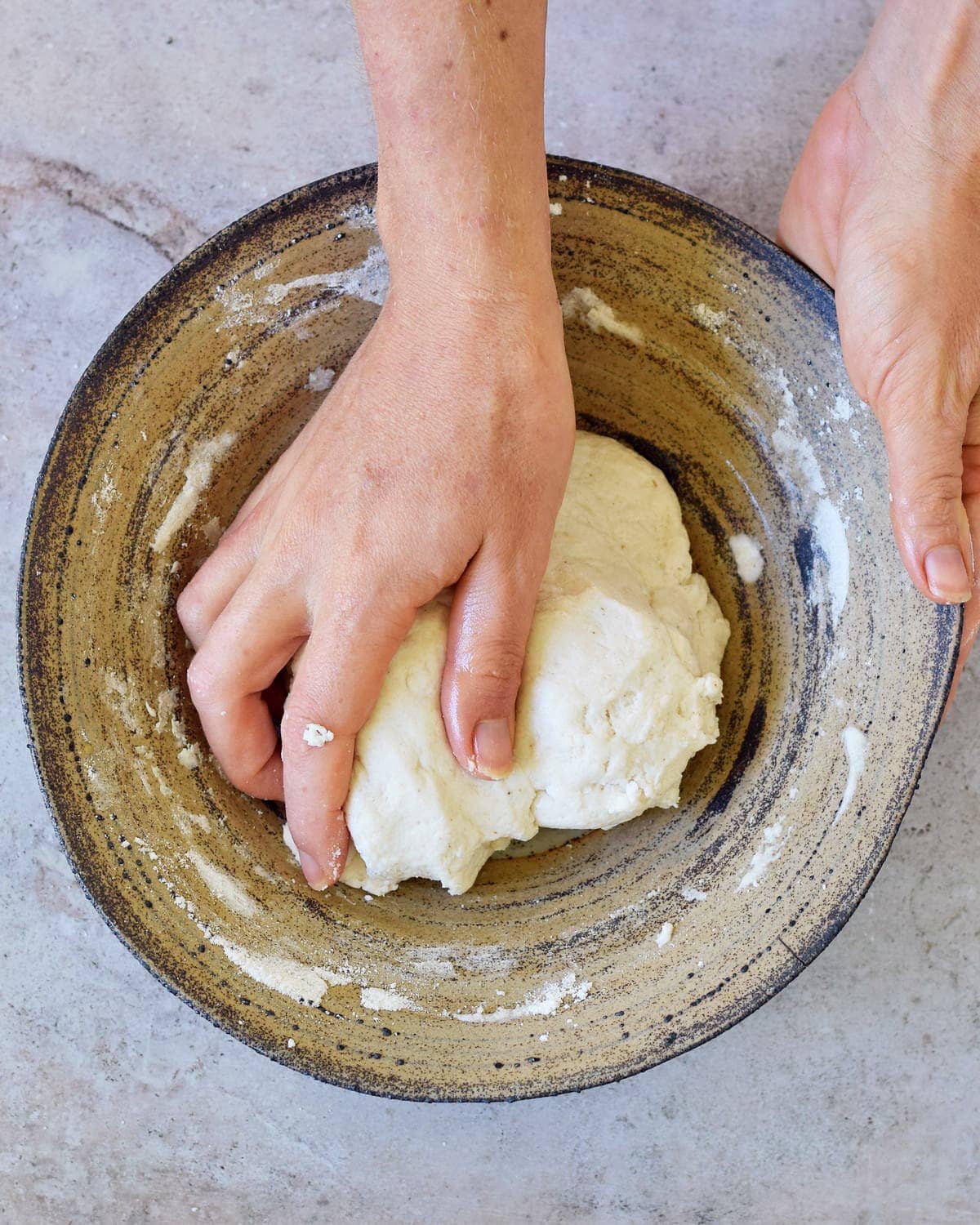 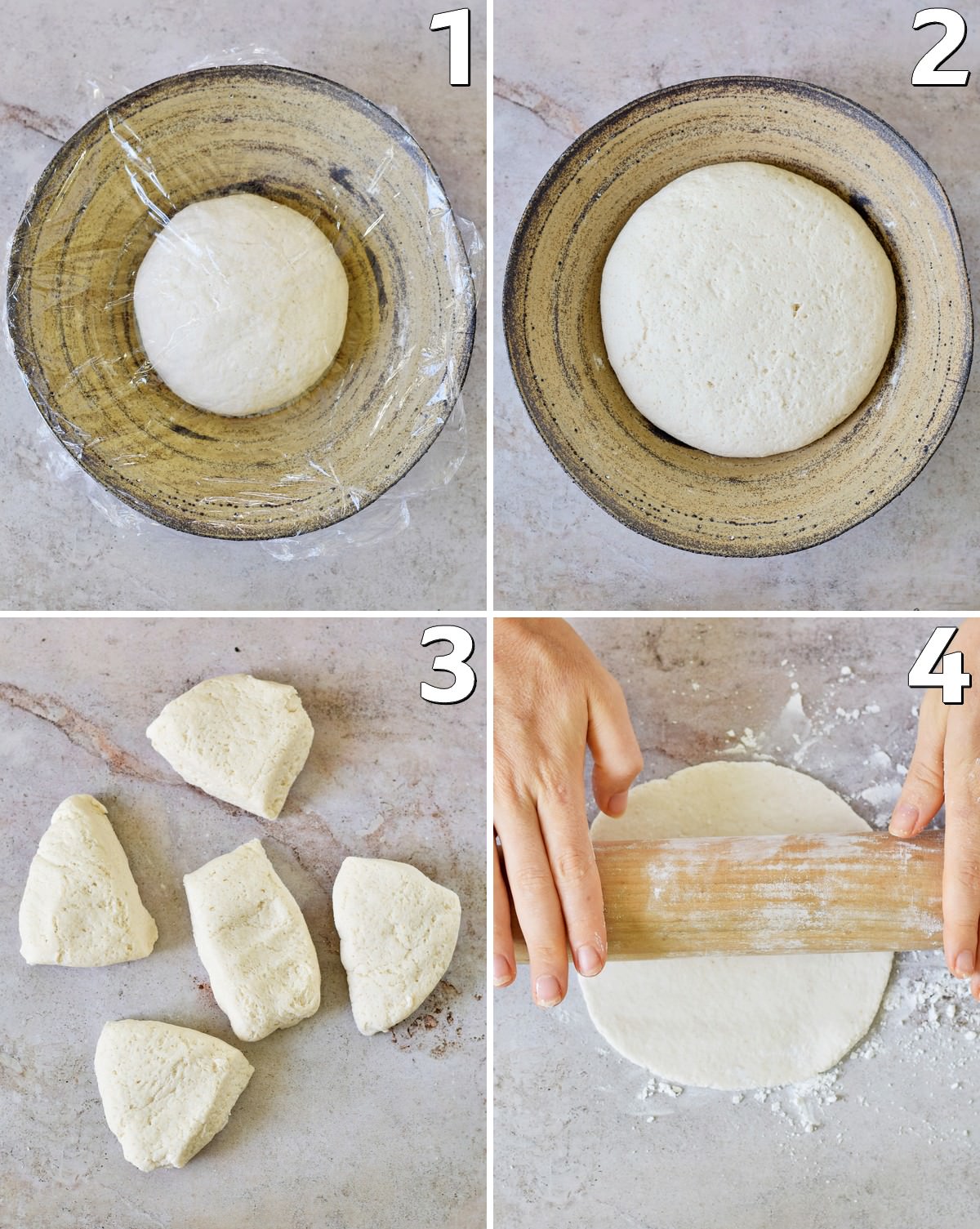 Divide the dough into 5 pieces (around 90g), or 10 if you want mini pittas, and shape each piece into a ball.

Leave to rest for a further 10-15 minutes before rolling each dough ball into a circle around ¼-inch thickness using a floured rolling pin.

This is the critical step in getting the gluten-free pita to puff up. Make sure not to use heat that is less than 390°F (200°C).

Heat a skillet over medium-high heat (I chose 390°F on my induction cooker). Once hot, cook a pita in the pan for 1 minute – until bubbles begin to form on the surface. 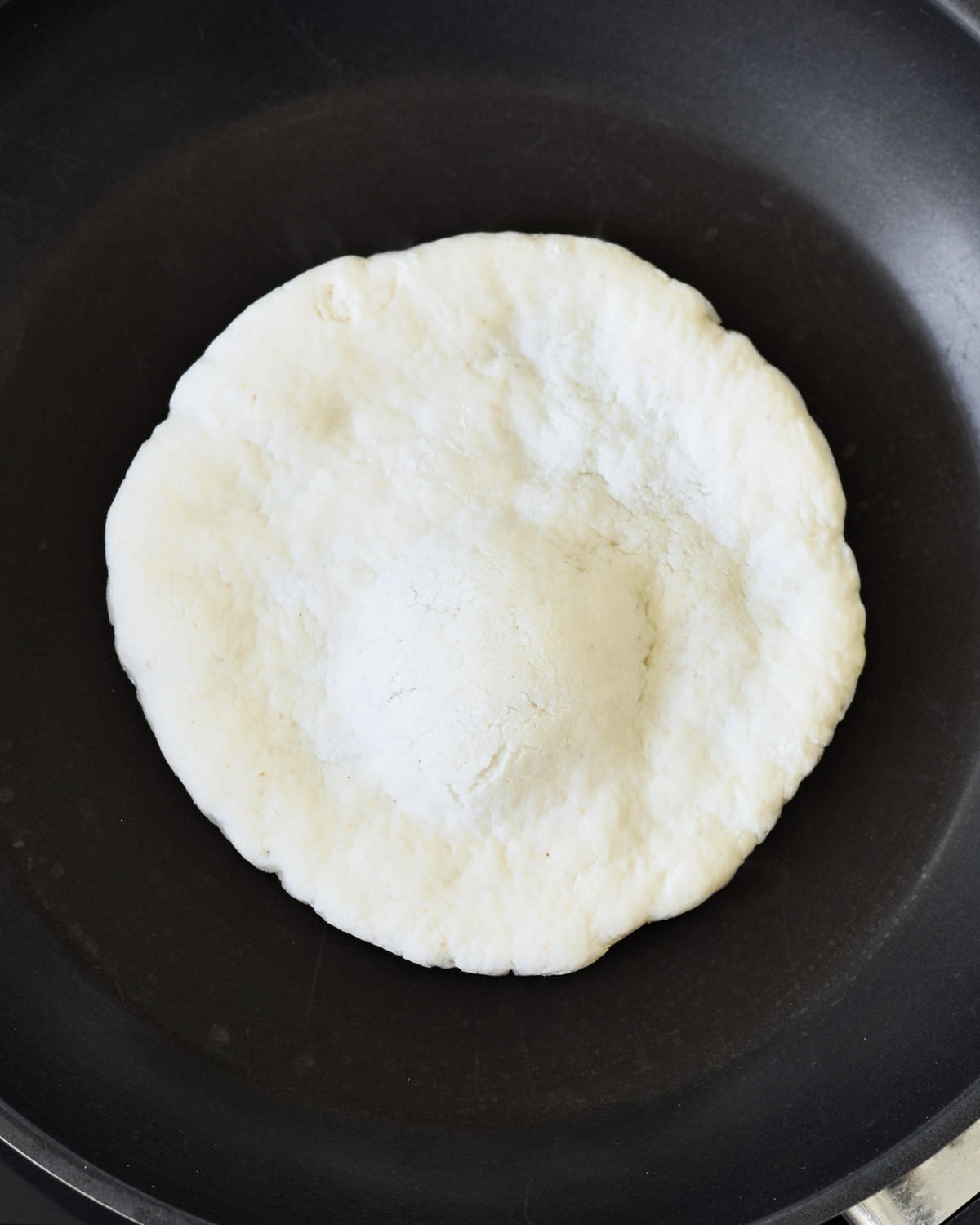 Then, flip the pita over and cook for a further few minutes on the other side. Flip once more, and it should puff up and form a large pocket.

Repeat this with the remaining pita dough. Keep all cooked ones covered with a clean, dry kitchen cloth to stop them from drying out/crisping up.

How much the gluten-free pita bread puffs up (if it does at all) can be solely down to how thick your dough is rolled out. If you test one pita and it doesn’t puff up, roll the next one thinner and try again. This can take a little bit of practice to get the thickness sweet spot, but when you do – hello pocket-y goodness! 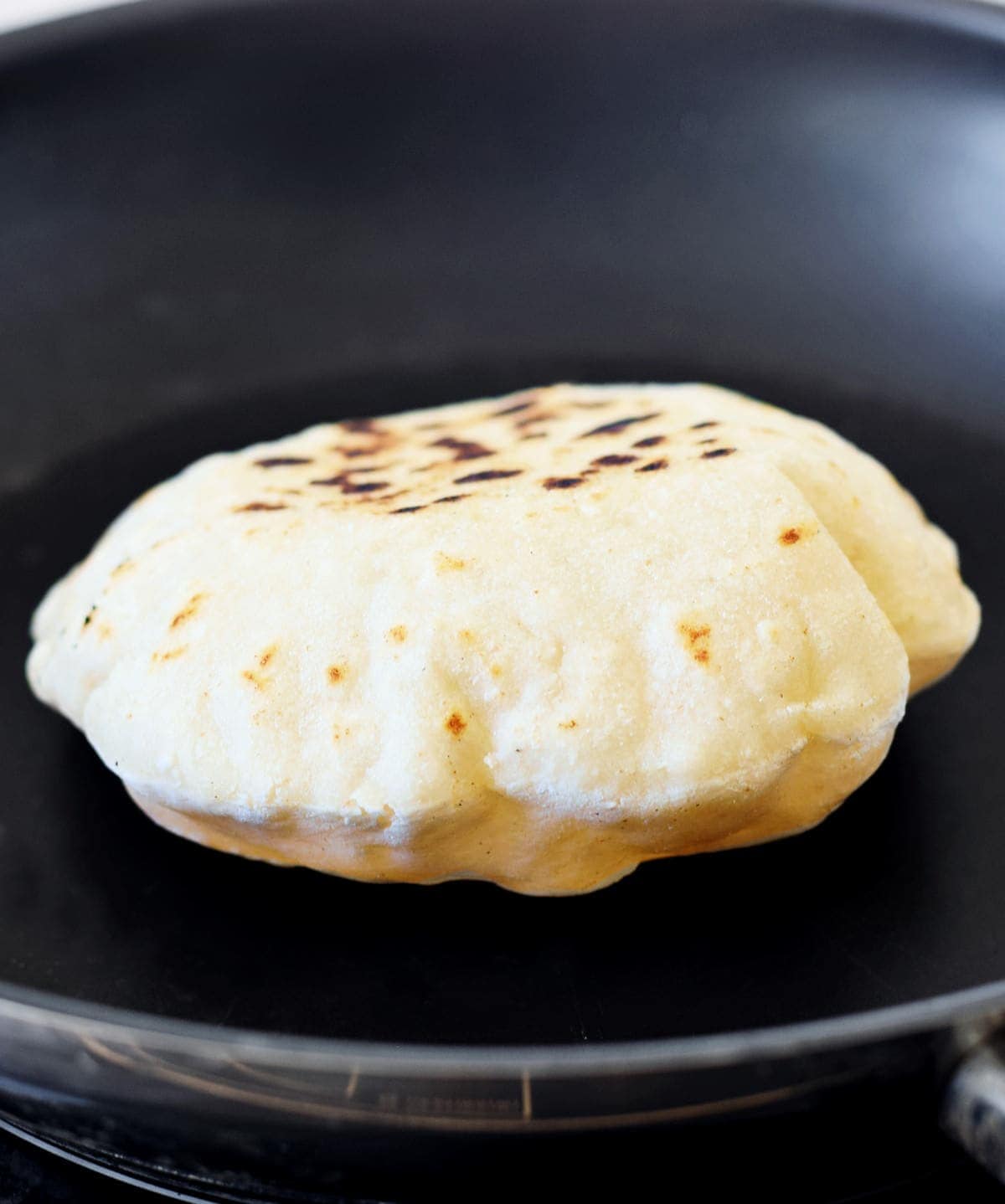 How To Make Ahead & Store?

You can prepare the gluten-free dough in advance and only cook a little at a time. The prepared, uncooked dough can be kept in the fridge, covered, for 2-3 days.

I prefer to make the gluten-free pita bread fresh, so they don’t dry and crisp up. However, leftovers can be stored in an airtight container (to avoid them from drying out), for a few days. I like to splash them lightly with a little water and microwave for 10-15 seconds. Or bake in the oven for a couple of minutes), to soften them.

This vegan pita bread should also be freezer friendly for up to a month, though it isn’t something I’ve tried. Make sure to wrap the bread well before freezing. 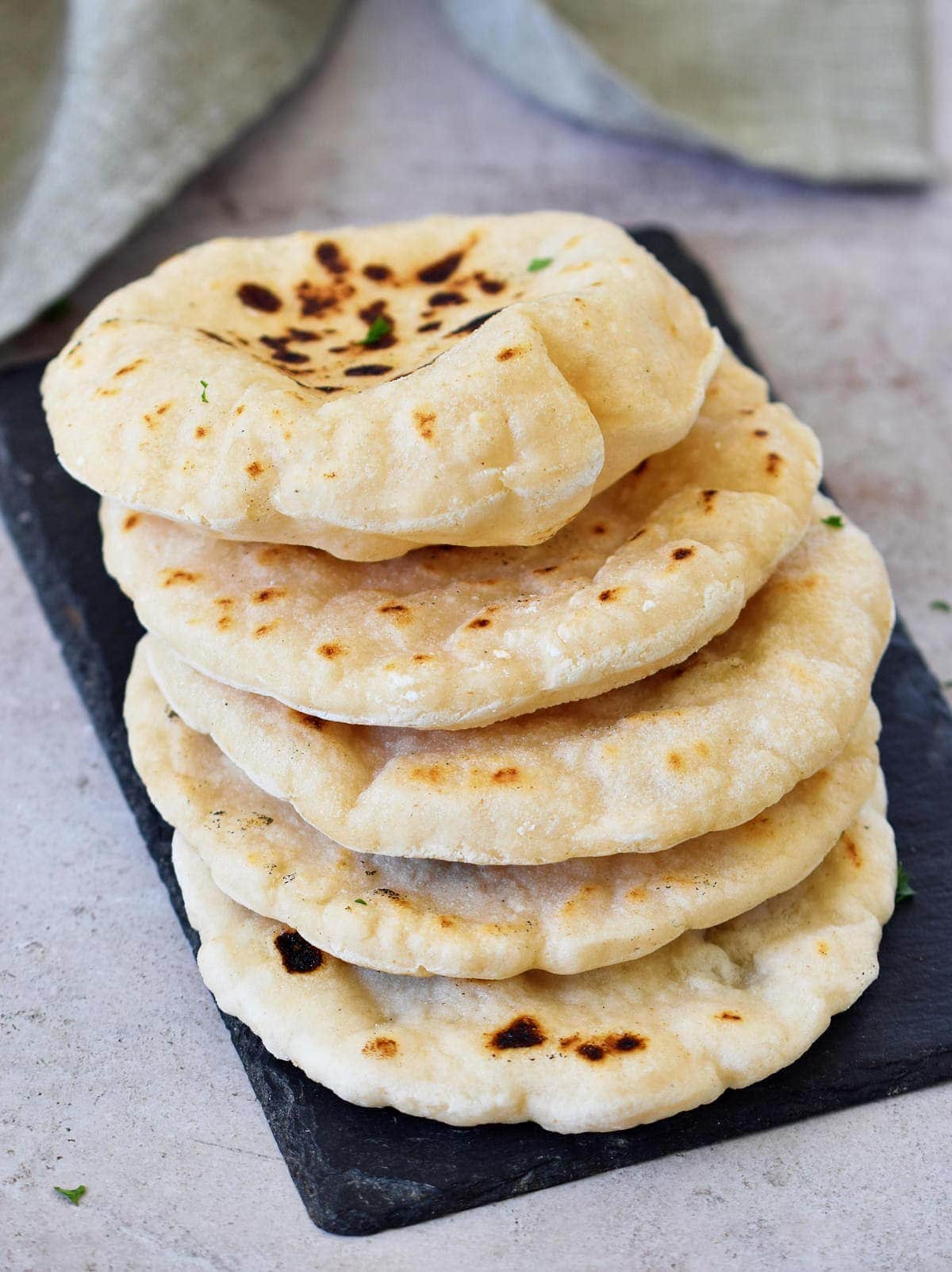 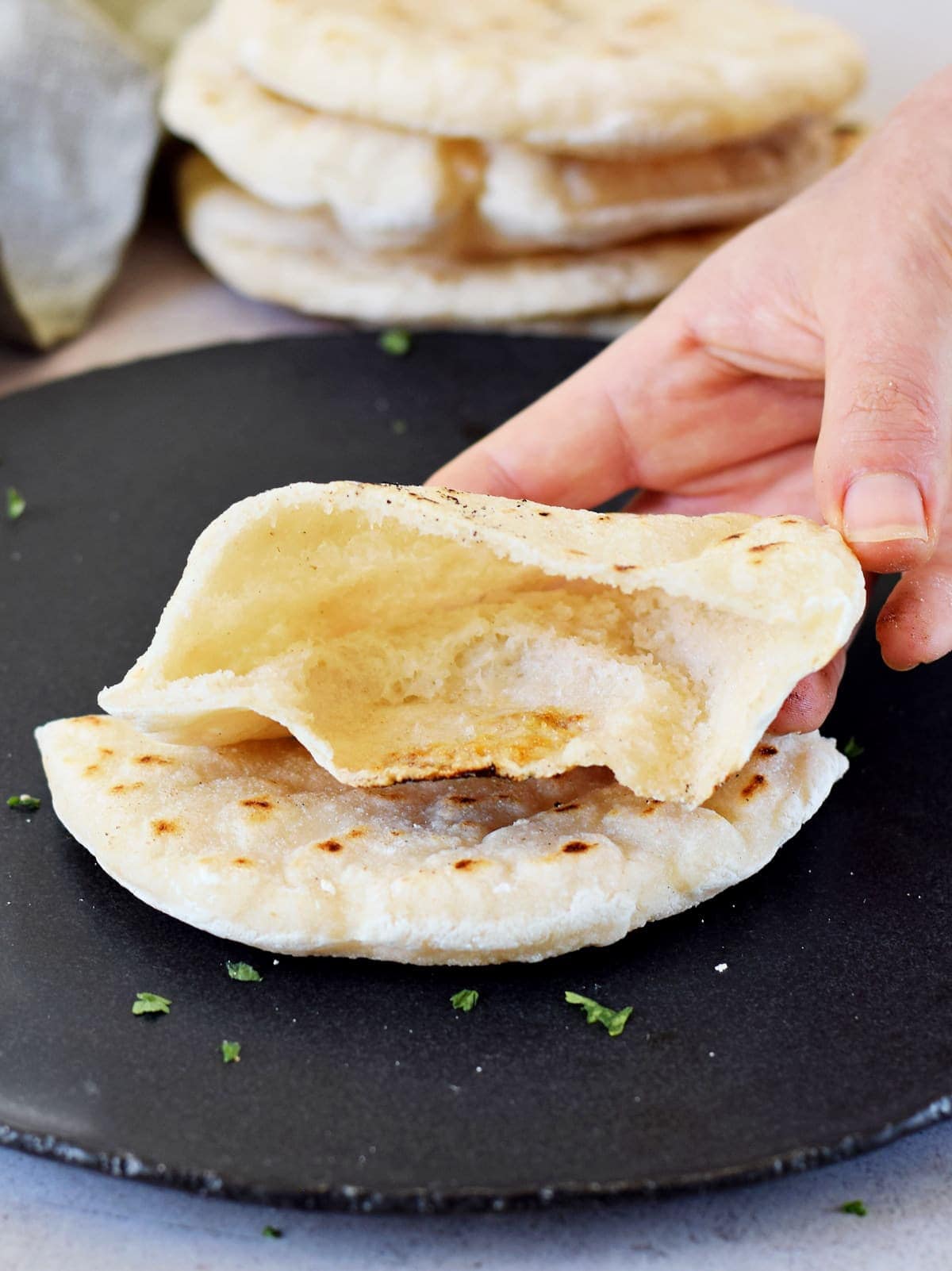 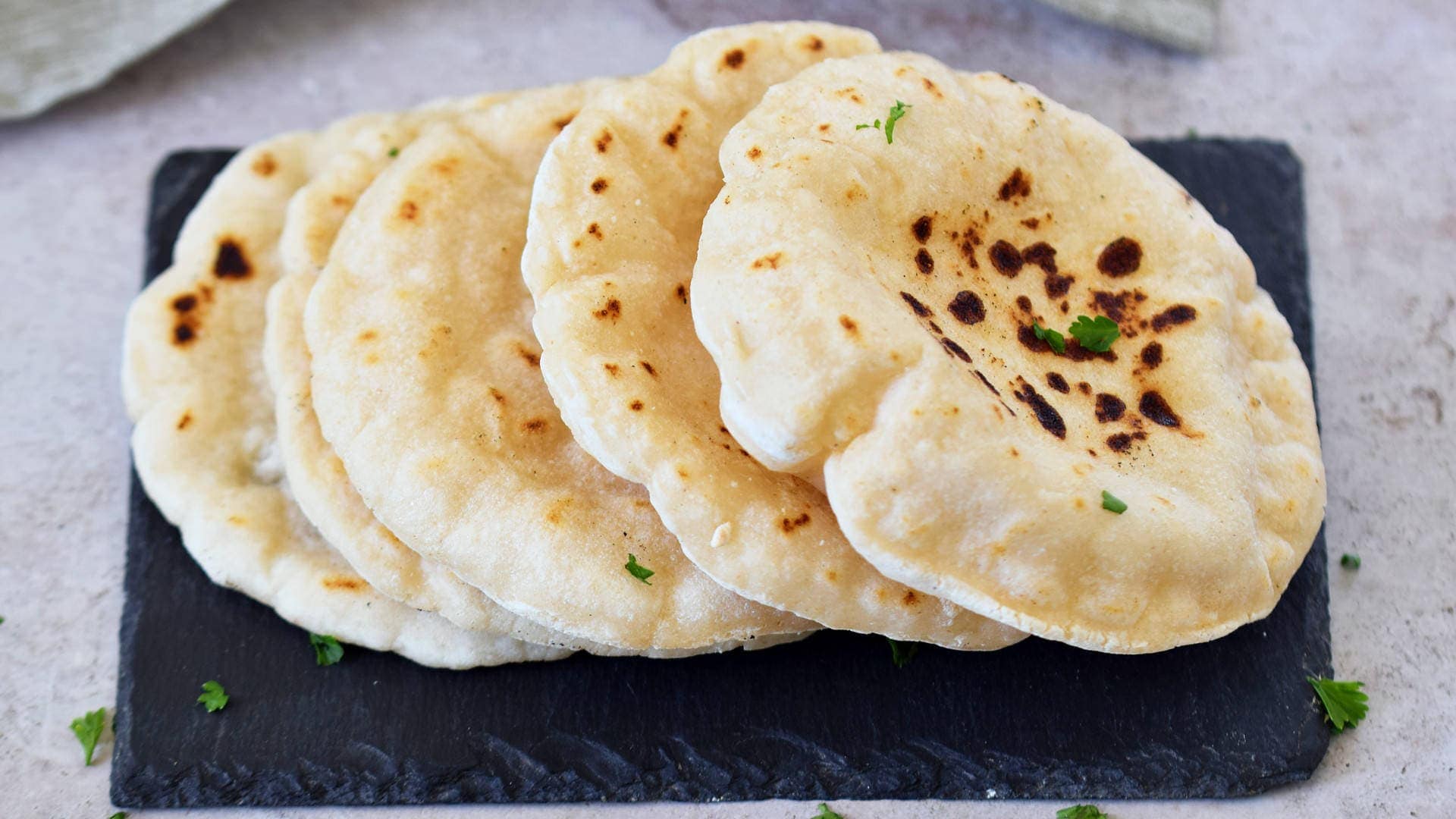 If you try this gluten-free pita bread recipe, I’d love a comment and recipe ★★★★★ rating below. Also, don’t forget to tag me in re-creations on Instagram or Facebook with @elavegan/ #elavegan – I love seeing your recreations. 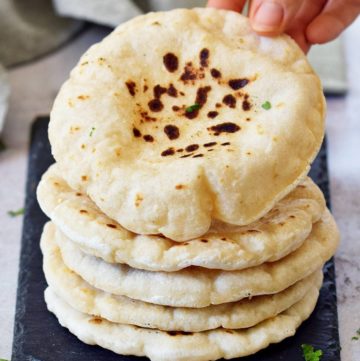 Author: Michaela Vais
This gluten-free pita bread is tender, fluffy, and pillowy - all without the use of gluten! With just 5 ingredients (not including water, salt, and oil) and a simple process - you can make delicious, cost-effective flatbread at home that will have you ditching store-bought versions for good!
4.91 from 30 votes
Print Recipe Pin Recipe
Prep Time 10 mins
Cook Time 20 mins
Total Time 30 mins
Course Bread
Cuisine Mediterranean, Middle Eastern
Servings 5
Calories 197 kcal

Knead it and let it rise 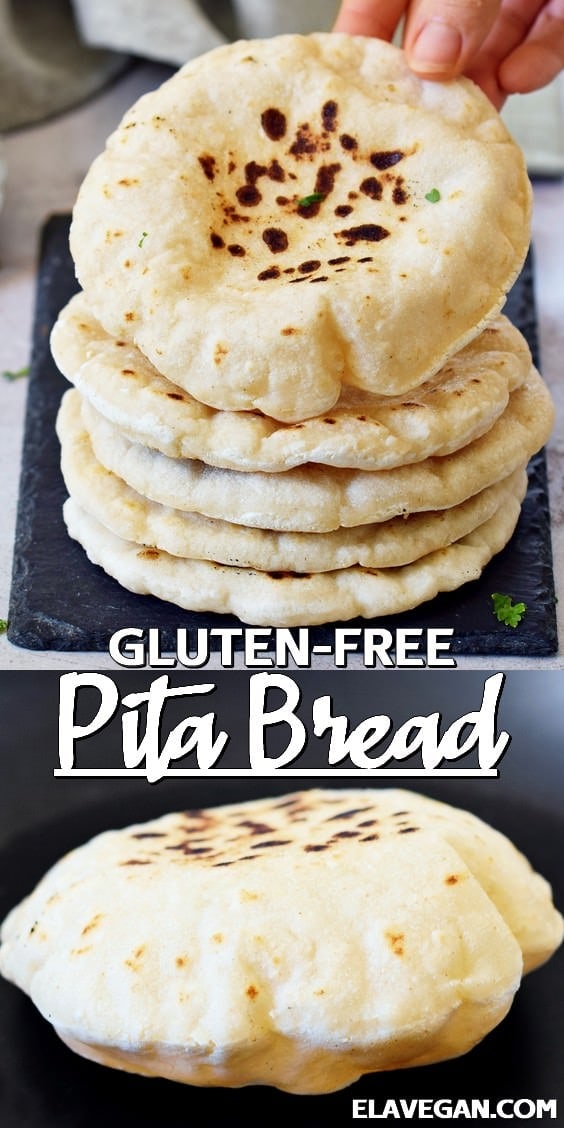