These vegan snickerdoodles are light, soft, and fluffy with a cinnamon sugar crisp coating – perfect for impressing the entire family! Plus, this recipe is gluten-free, dairy-free, uses just one bowl, and is made with 10 simple ingredients! 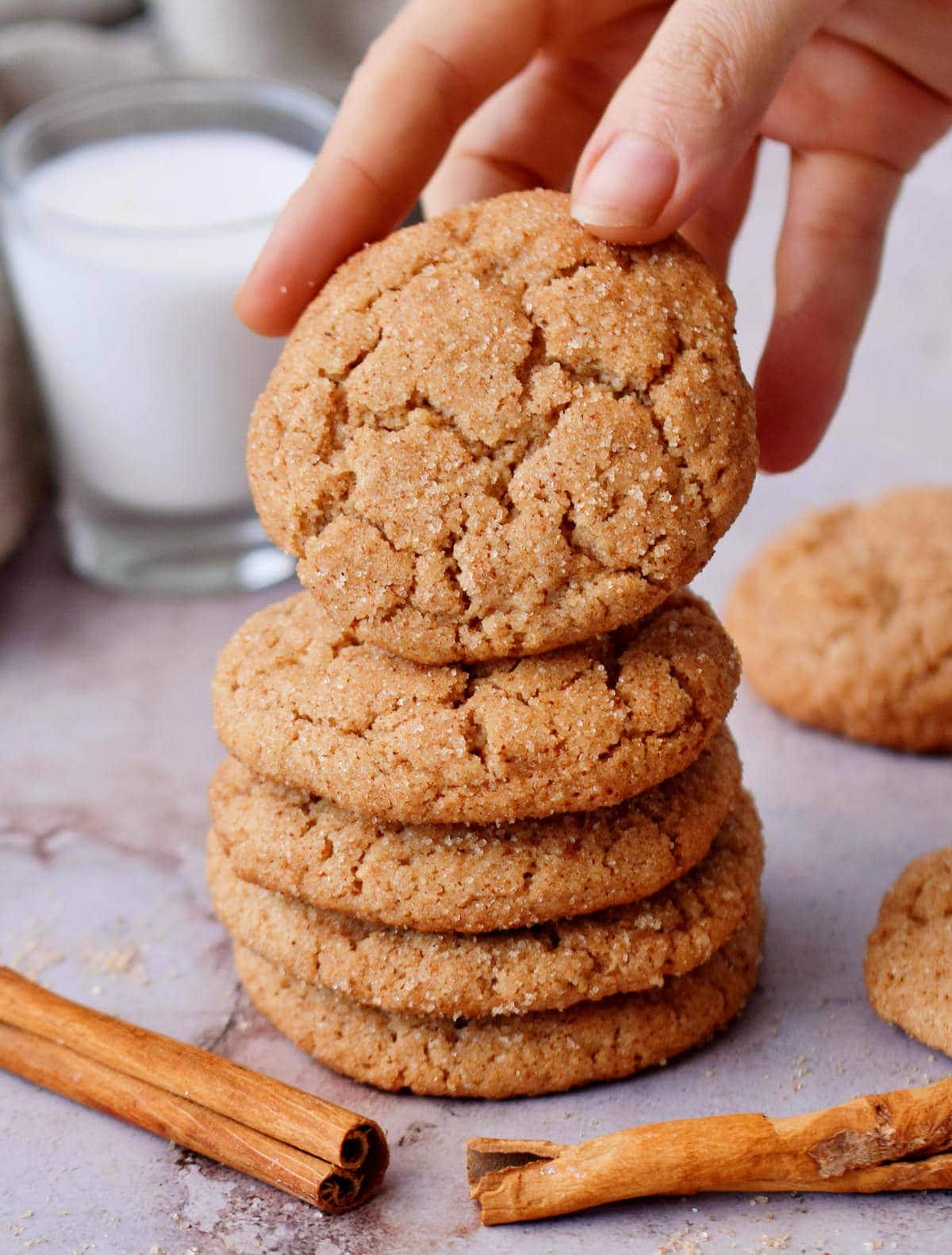 Last week, I posted my recipe for star-shaped vegan cinnamon cookies (called Zimtsterne); this week, I thought I’d go for something similar, but a little more well-known in the US, with these simple vegan snickerdoodles. With the holidays around the corner, it’s just the time to enjoy all-things cinnamon. Not that I need an excuse to enjoy any type of vegan cinnamon cookies, or any cookies (by the handful!). 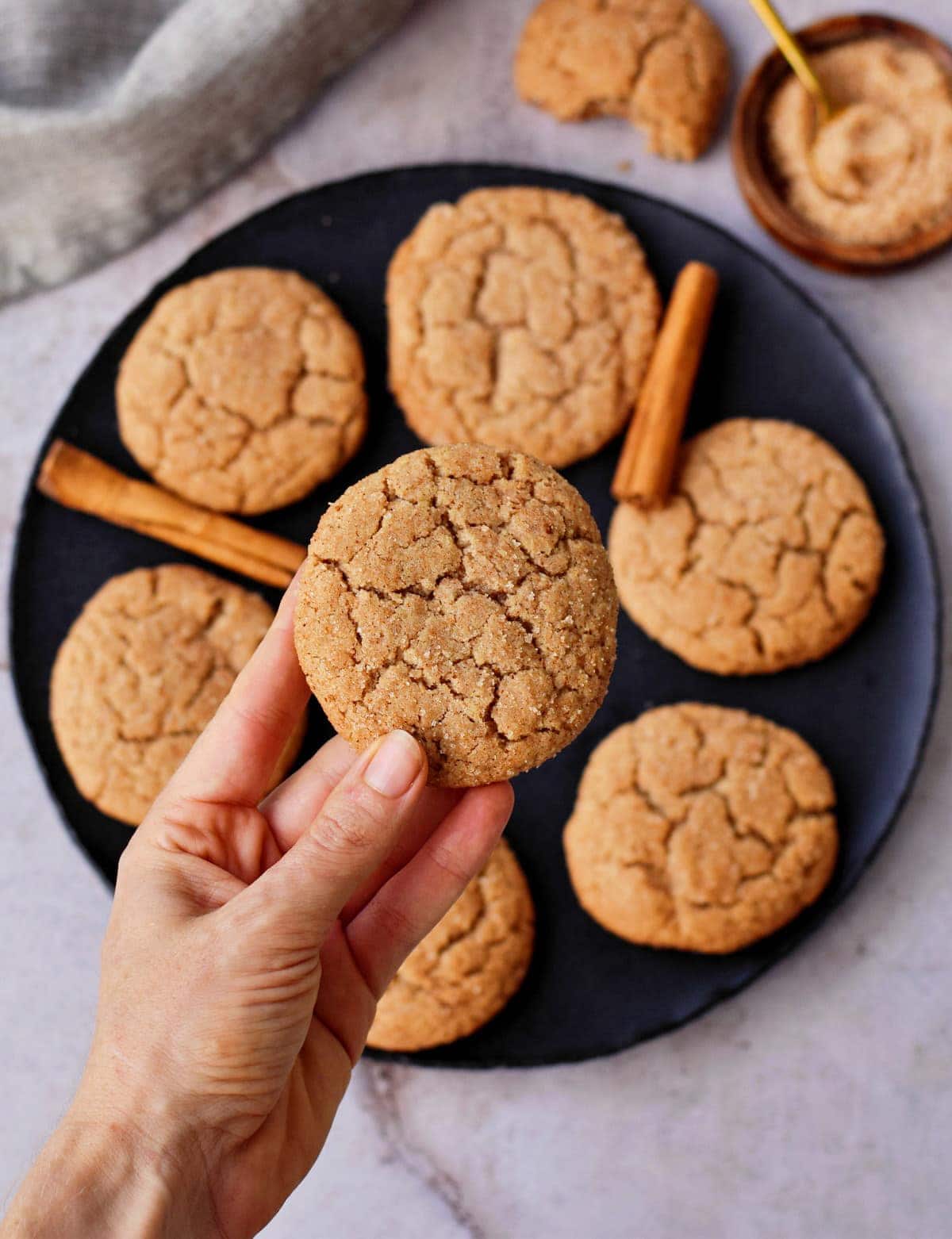 Snickerdoodles are a soft, chewy vanilla cookie coated with delicious cinnamon sugar – for a lightly crisp/crunchy topping. Traditional snickerdoodles are made up of butter, oil, sugar, and flour (and often egg). They are similar to soft sugar cookies but with the bonus of cinnamon and a lighter, pillowy texture and slightly tangy flavor thanks to the cream of tartar within the recipe.

Unlike sugar cookies, snickerdoodles are crisp and lightly chewy, with a crinkly ‘cracked’ exterior and slightly tart flavor. In fact, the main difference between the two is the use of cream of tartar – which reacts with the liquids in the cookie dough and helps the cookie rise and gives it the signature slight ‘tang.’ It also helps to give the cookies their signature chew – as it prevents the sugar from crystallizing and becoming crunchy, though mine turned out rather soft and not as chewy.

Not only is my vegan snickerdoodle recipe gluten-free, egg-free, and dairy-free, but the cookies are still perfectly cinnamon sweet, light, and fluffy – Friends and family would never guess that they’re vegan! 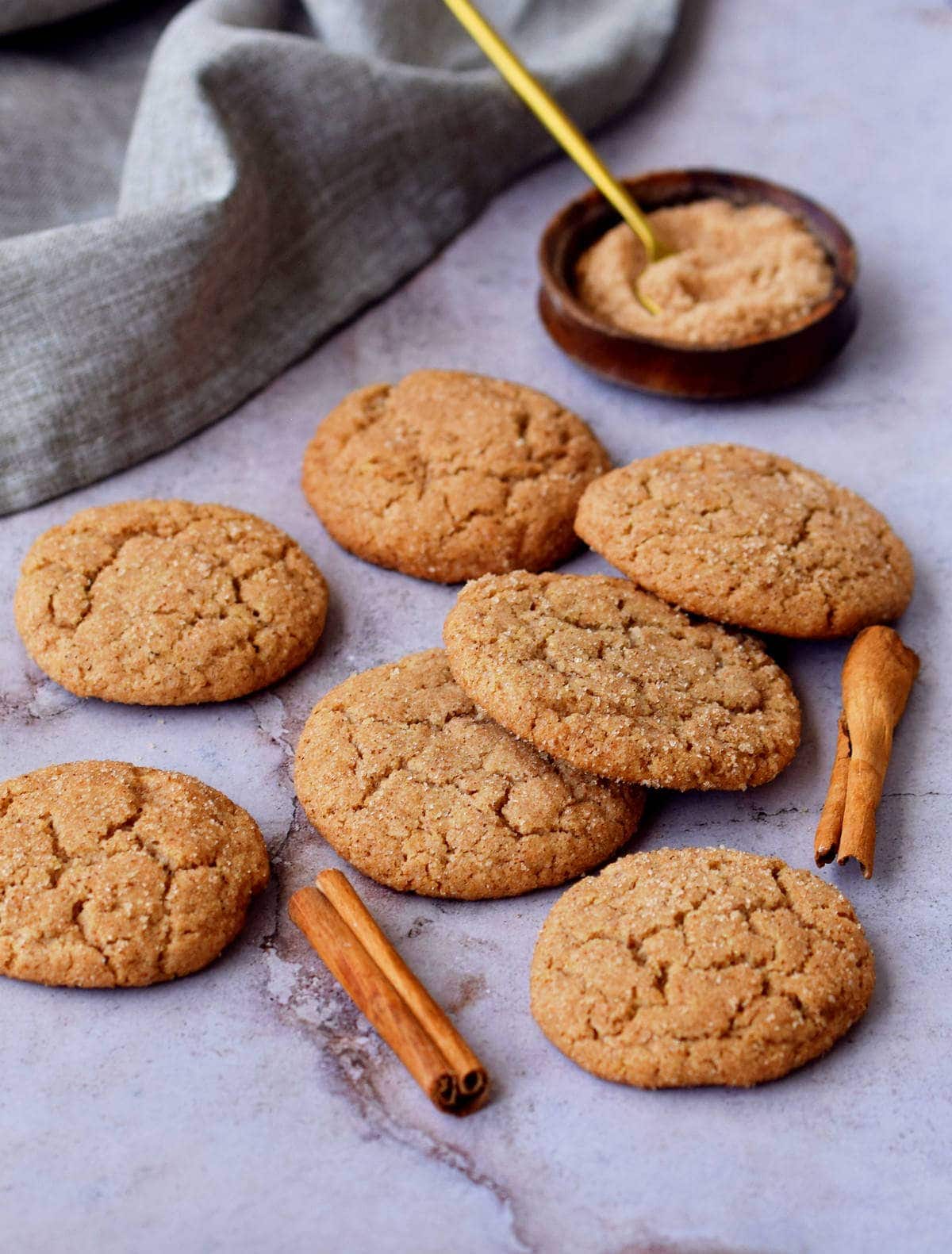 Here are the ingredients that you will need: 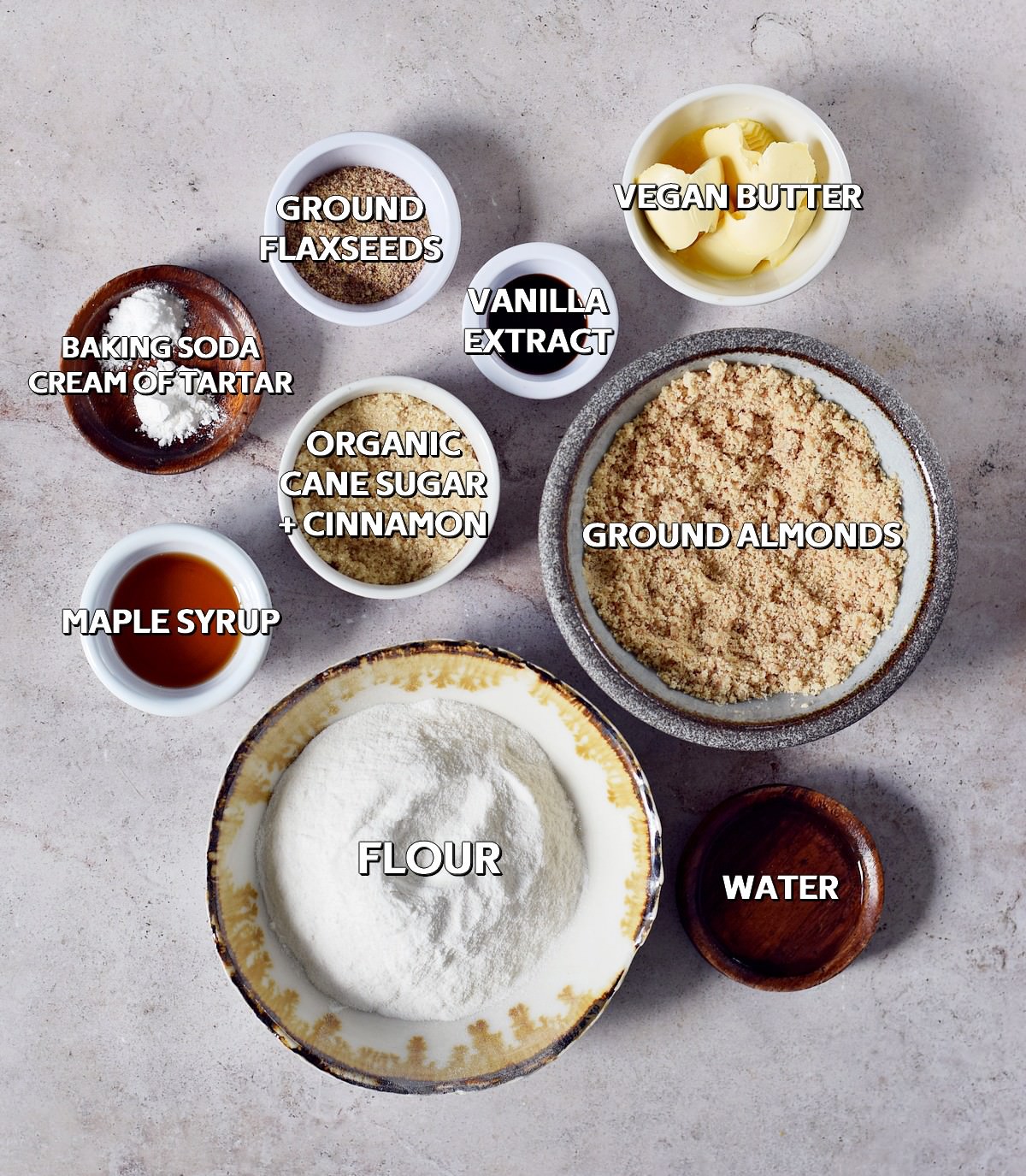 Step One: Prepare the flax egg by mixing the flaxseed and water and set aside. Preheat the oven to 375F/190C and line a pan with parchment paper. 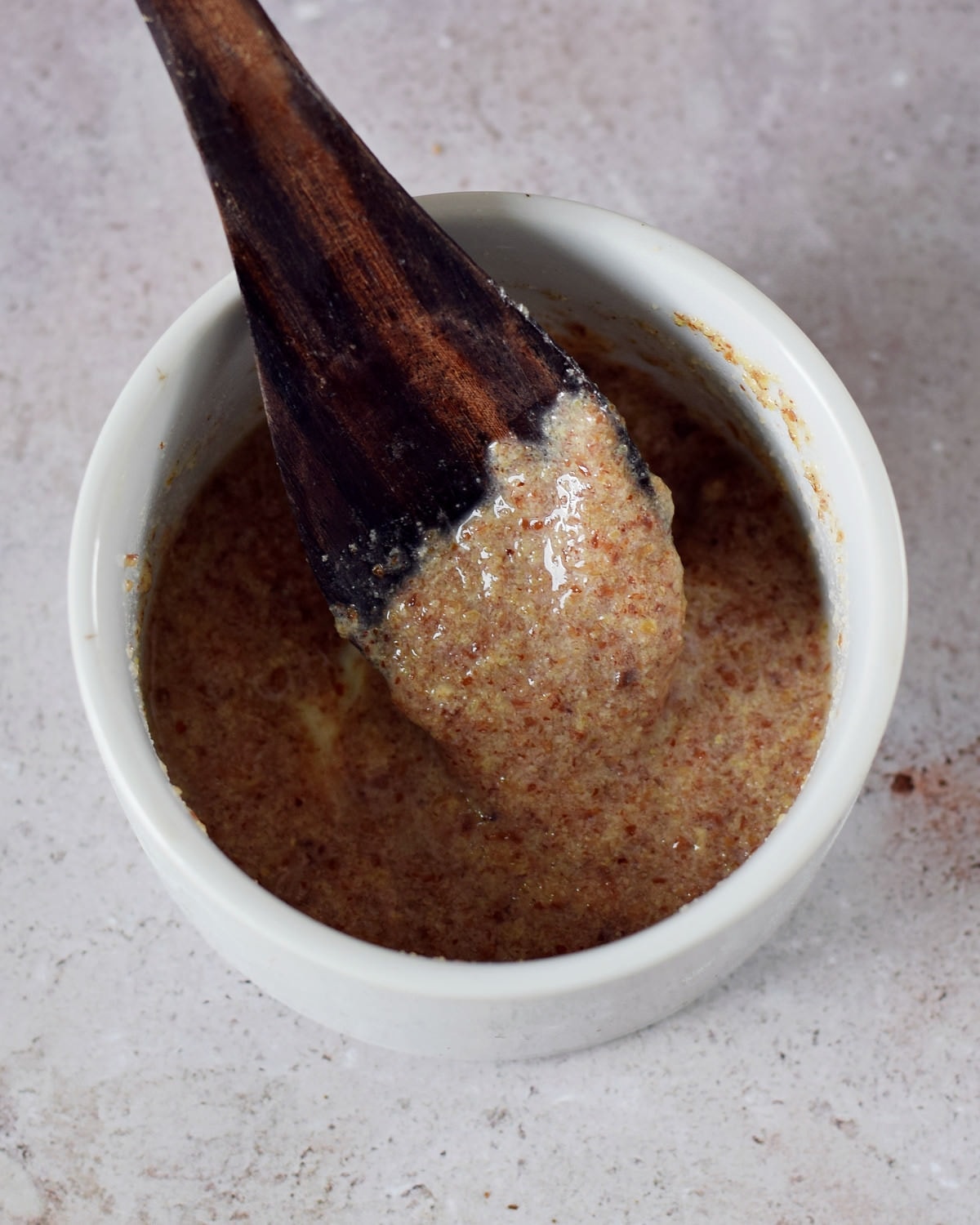 Step Two: Add all of the dry ingredients to the food processor and blend for 10 seconds (or use a mixing bowl and spoon). Then, add the wet ingredients and mix until a soft dough is formed (refer to the images).

Note: If you believe the dough is too soft and you will have problems shaping it, then you can place it in the fridge for about 15-30 minutes to firm up. 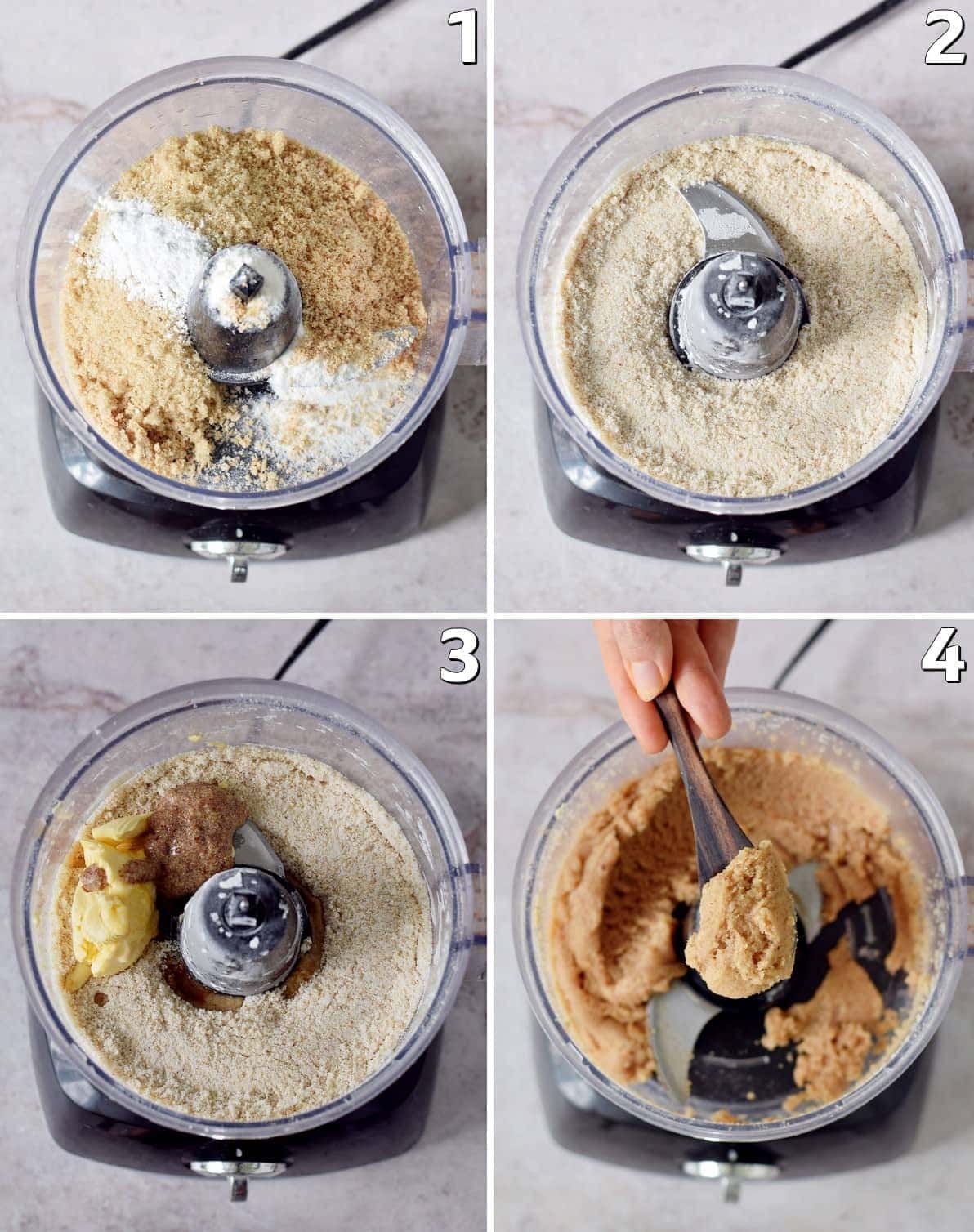 Step Three: Mix the cinnamon sugar in a small bowl.

Step Four: Shape the cookies using a slightly heaped tablespoon of dough per cookie and rolling into a ball. Roll each ball in the cinnamon mixture and then place on the baking sheet 2-3 inches (5-7 cm) apart.

Step Five: Bake the cookies in the oven for 12 minutes and then remove and allow them to cool before enjoying.

Note: They’ll be quite soft when first removed from the oven but will firm up while cooling. 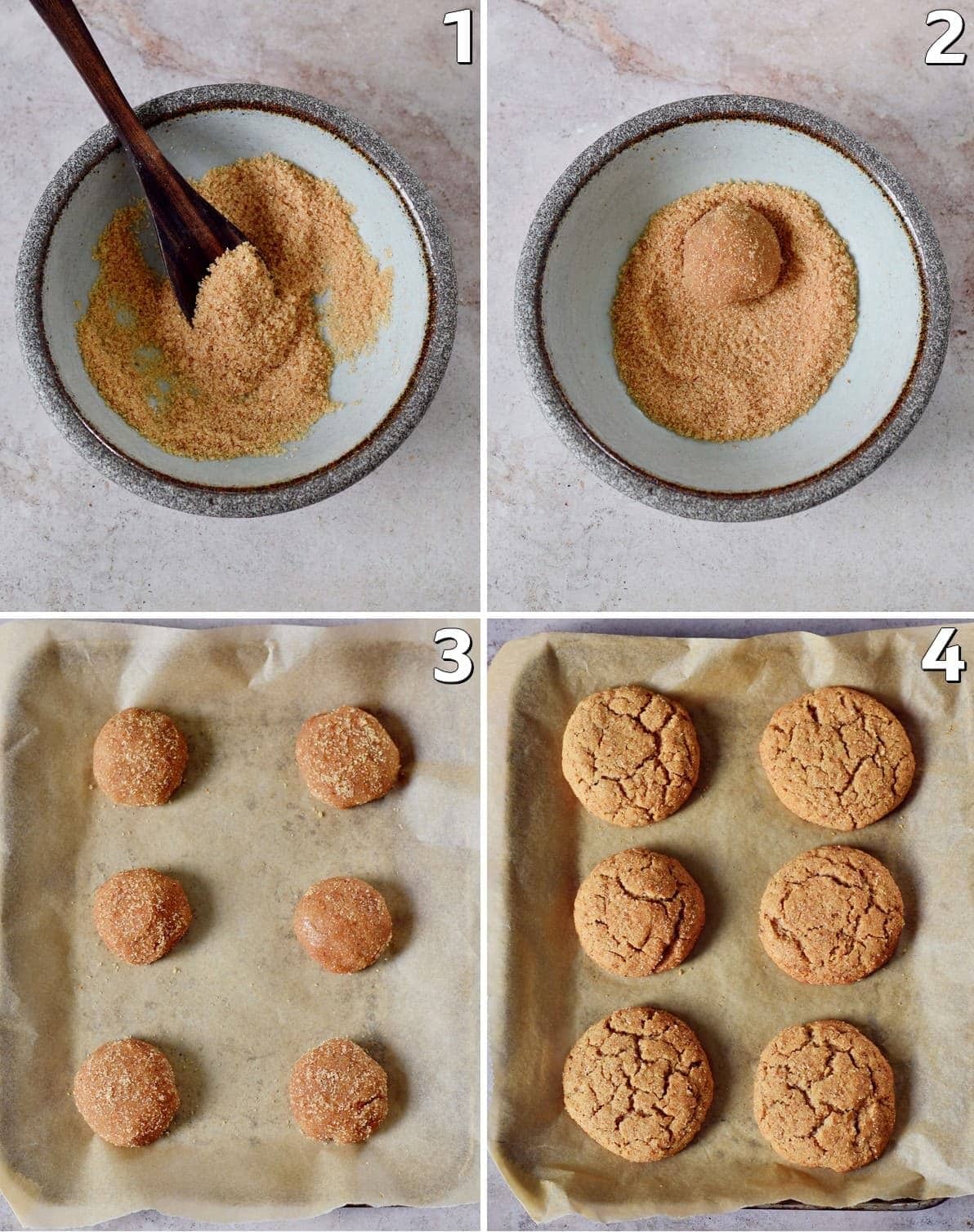 As delicious as these cookies are alone, that’s not the only way to enjoy these dairy-free snickerdoodles. Other options include: 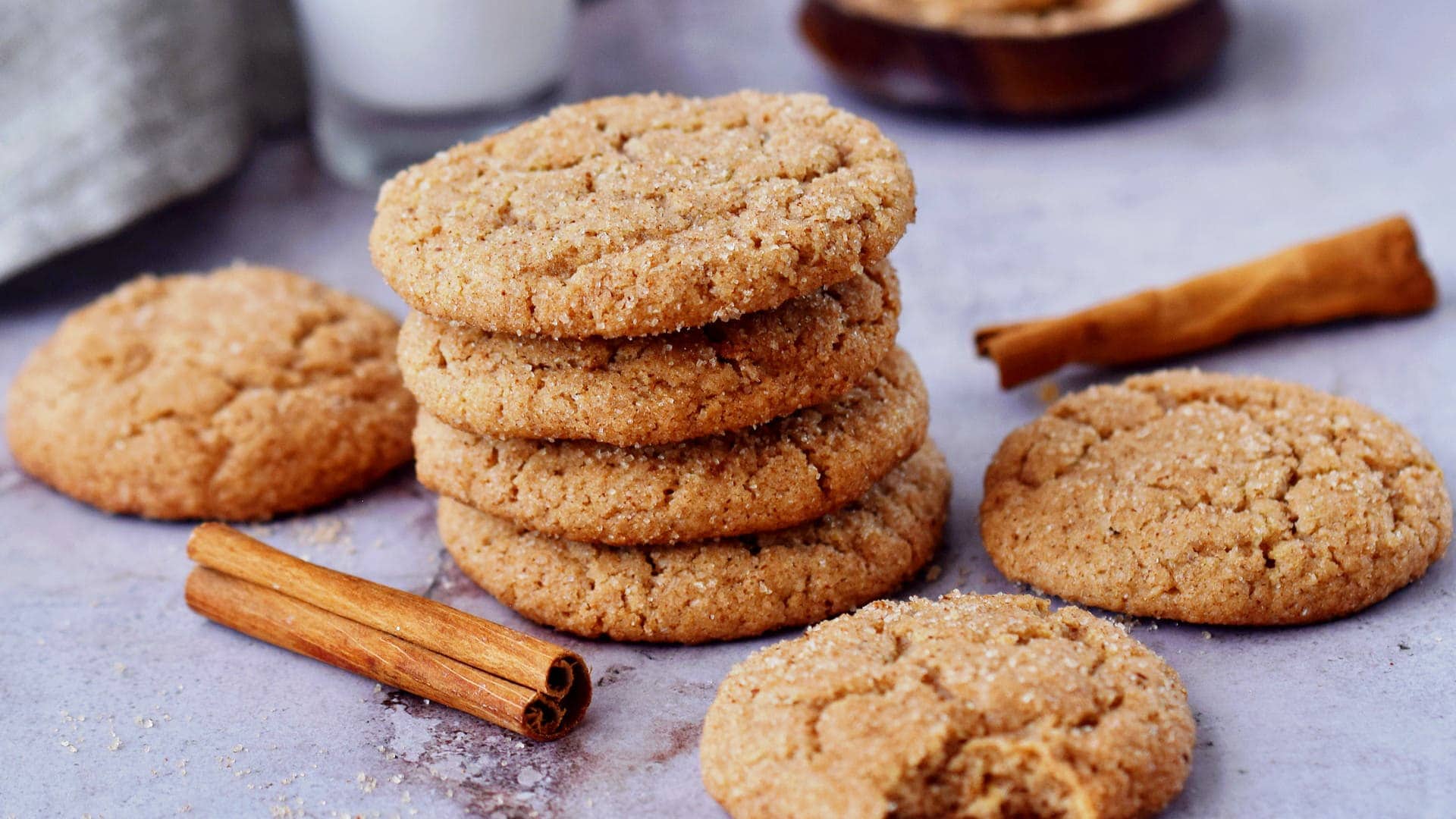 How to Make Ahead & Store

You can make the gluten-free snickerdoodle dough ahead. Keep the dough covered in the refrigerator for up to 2 days before baking.

The dough is also freezer friendly, for up to 2 months. I prefer to do this with the rolled, cinnamon coated cookie balls that are ready to bake. You can bake them from frozen, adding a few extra minutes to the baking time.

To Store The Vegan Snickerdoodles:

Store the baked snickerdoodles in an airtight container at room temperature between 5-6 days or within the refrigerator for up to 10 days.

The baked vegan cinnamon cookies are also freezer friendly for up to 2 months. Simply allow them to thaw before eating. 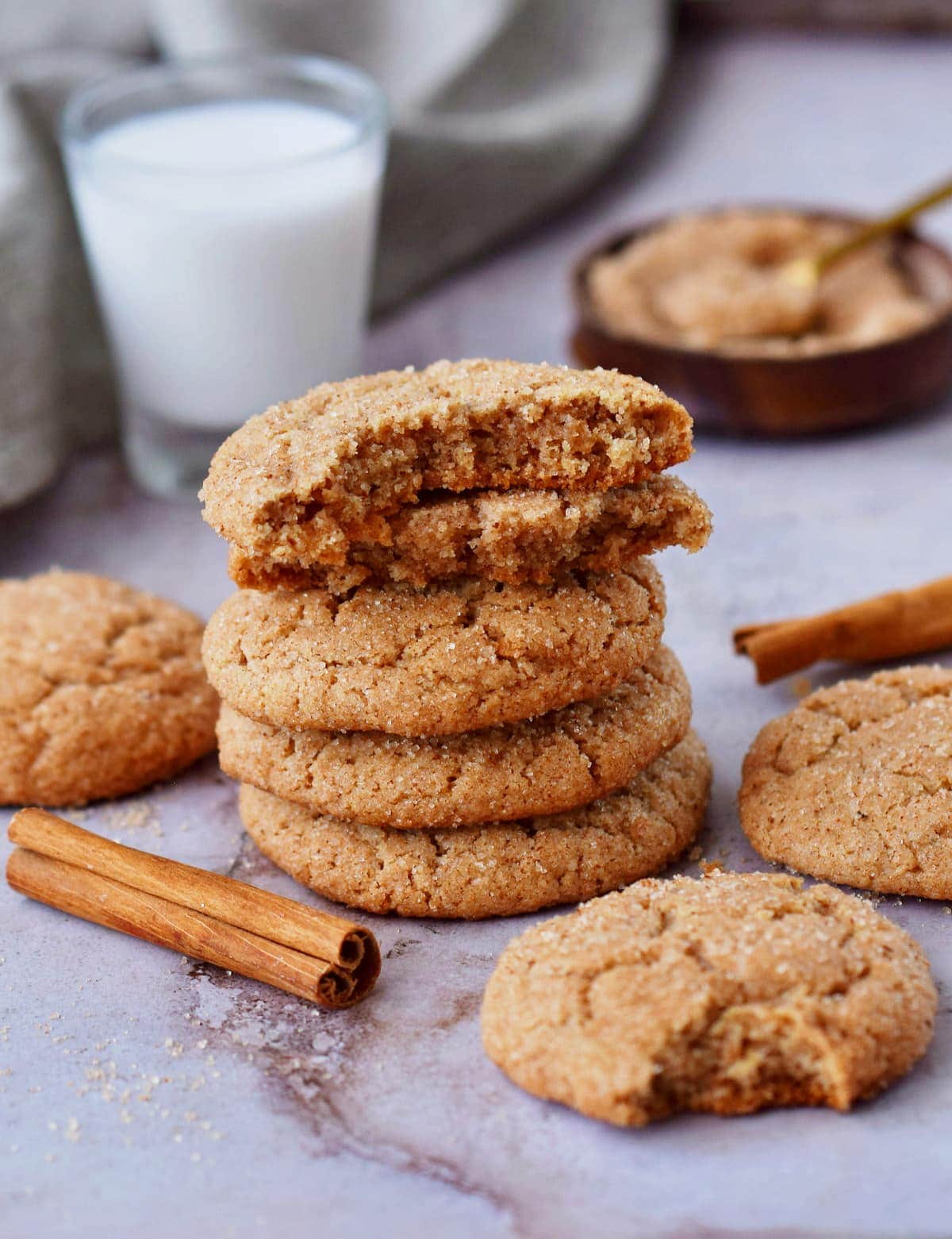 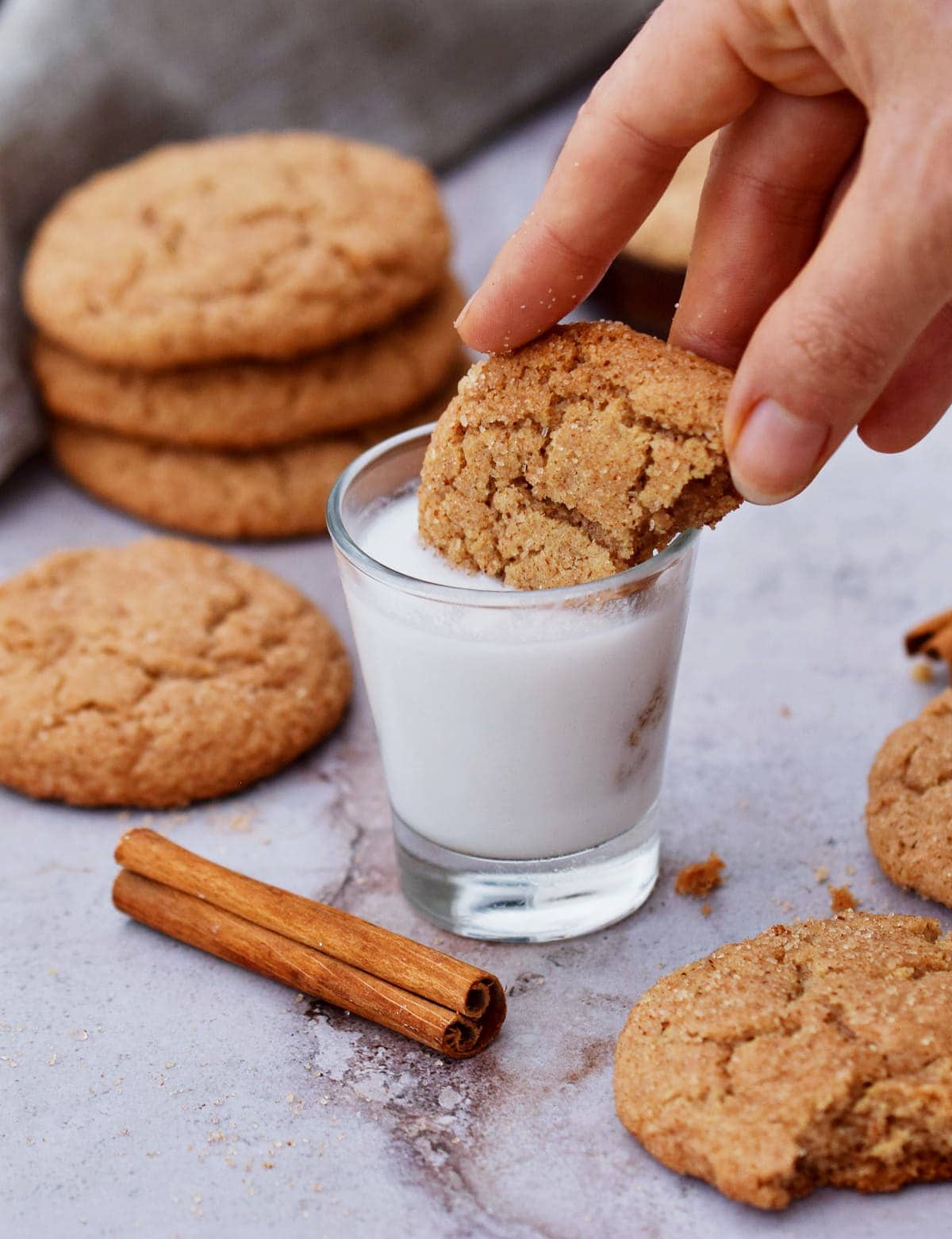 If you love these gluten-free snickerdoodles as much as I do, then you might like some of these other (holiday) bakes:

If you try the vegan snickerdoodle recipe, I’d love a comment and recipe ★★★★★ rating below. Also, don’t forget to tag me in re-creations on Instagram or Facebook with @elavegan/ #elavegan – I love seeing your recreations. 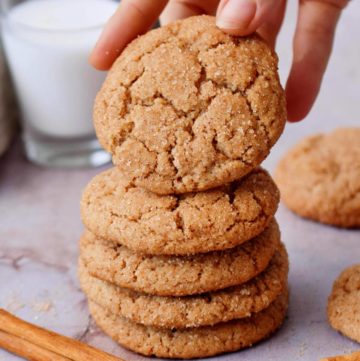 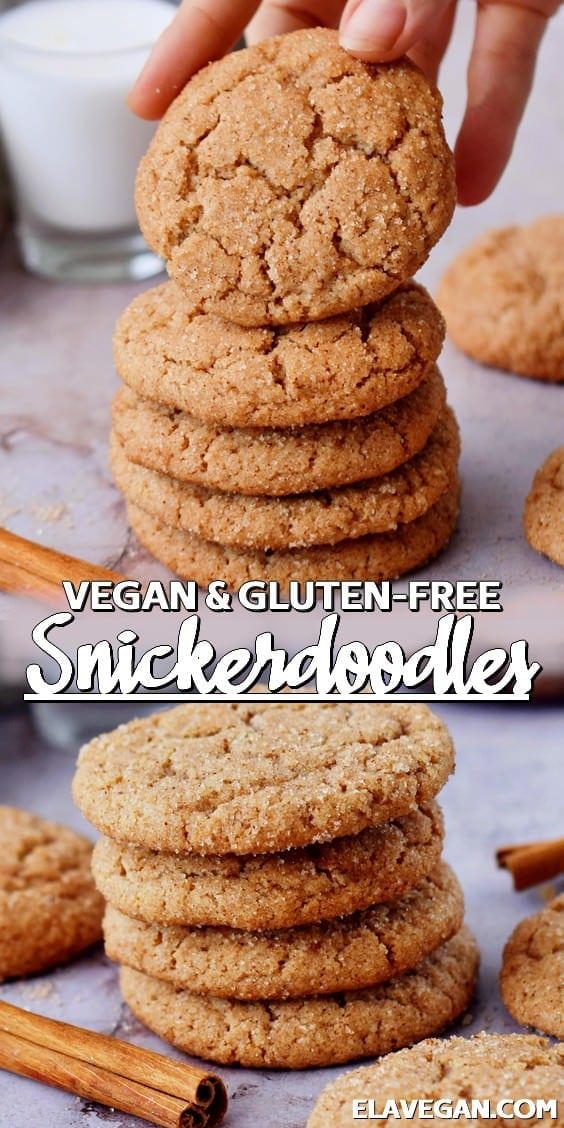