This healthy vegan corn chowder is super creamy, rich, and comforting. The recipe is plant-based, gluten-free, low-fat, and easy to make in one pot in about 30 minutes. It’s a great dinner or side for the summer months when fresh corn is in season. But it can also be made in the cooler months with frozen corn. This hearty, thick soup tastes best when you serve it in a bread bowl! 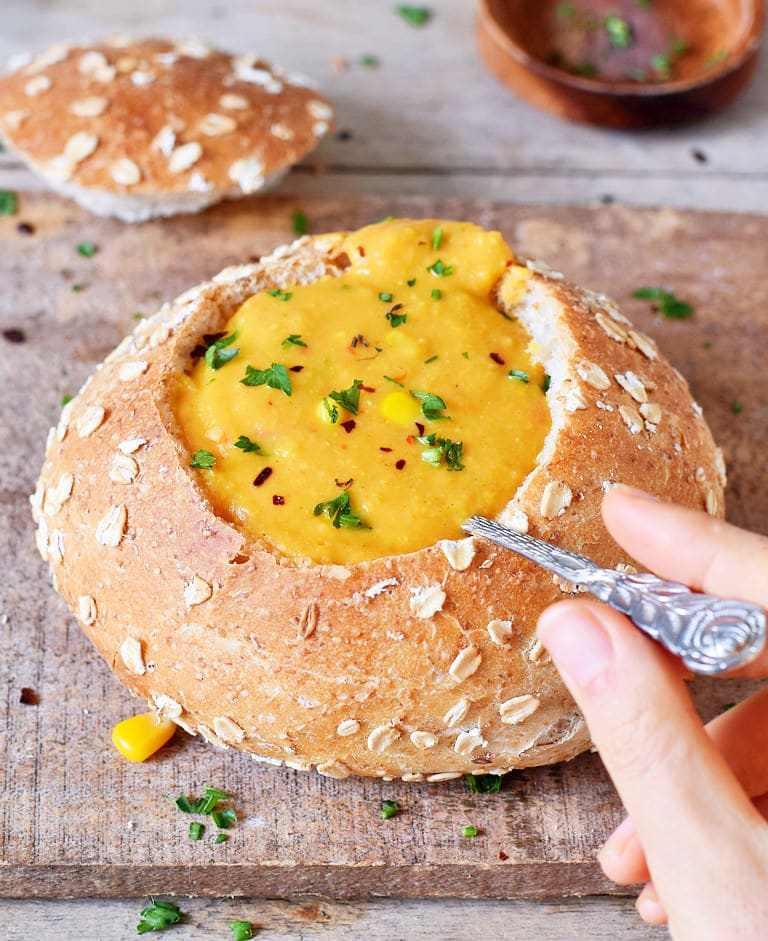 This easy corn chowder recipe is loaded with healthy produce which I love. It contains sweet corn, fresh from the cob, potatoes, red bell pepper, celery, and garlic. If you don’t have access to fresh corn (peak season lasts from May through September), don’t worry because you can also use frozen corn! I like using fresh corn though because I simply love the flavor and sweetness. 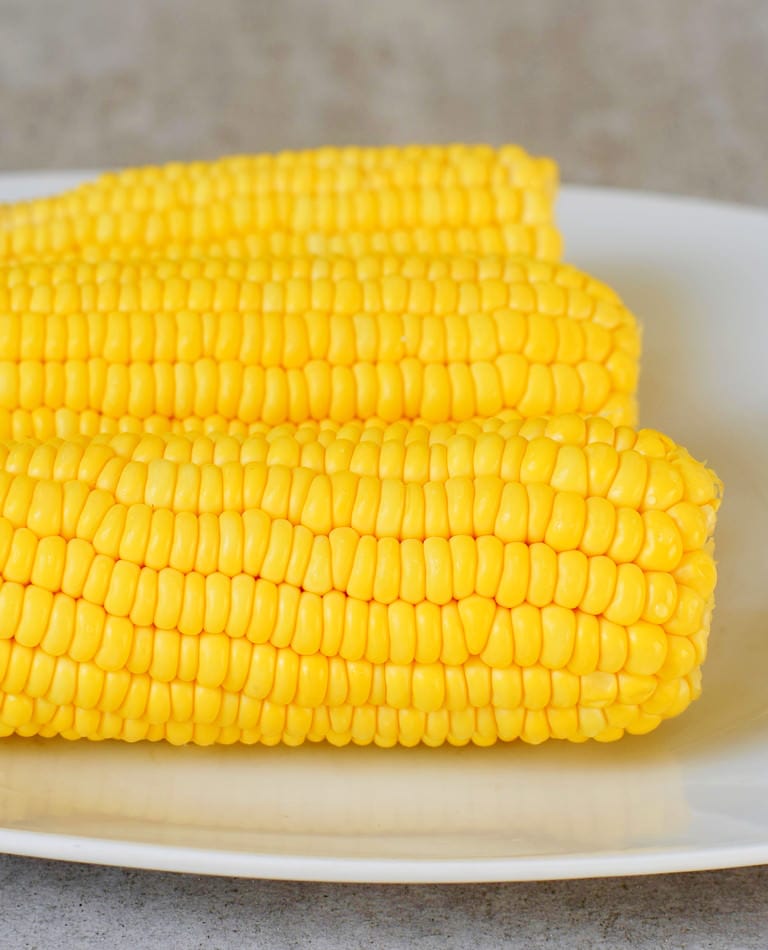 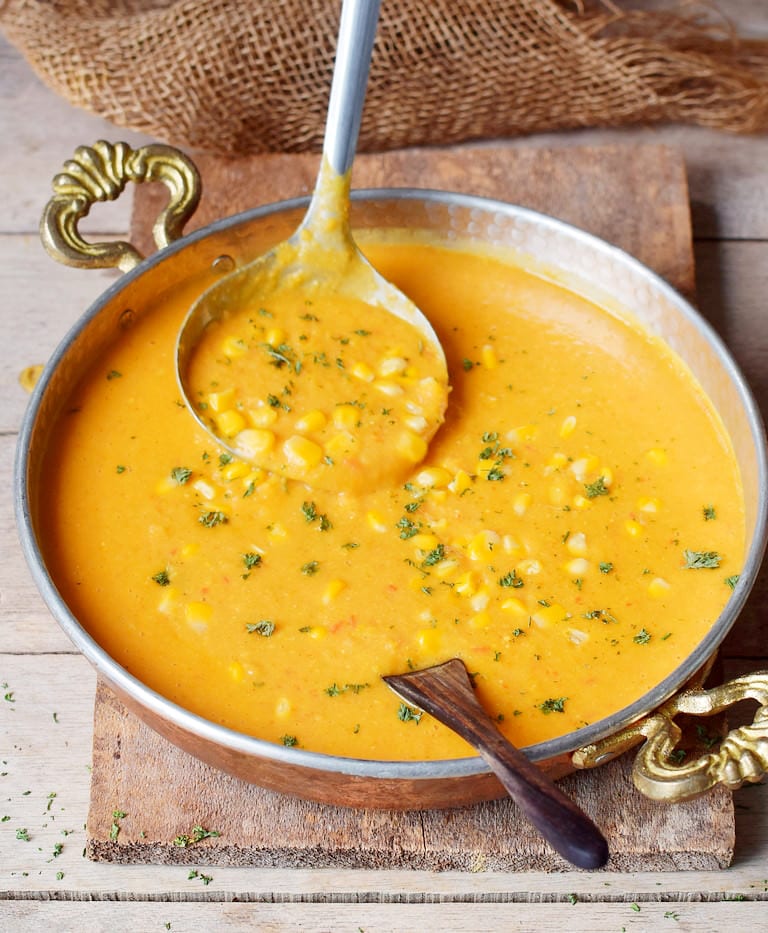 How To Thicken The Soup?

This vegan soup contains potatoes, which make the corn chowder thick and creamy. I also added cannellini beans to make the soup even thicker, richer and creamier! In addition, they add healthy plant-based protein which is a great bonus in my opinion!

Blending the soup makes it creamy, smooth, thick and comforting. This hearty soup is a medium thickness but if you want it even thicker I would suggest using just 3 cups of vegetable broth. 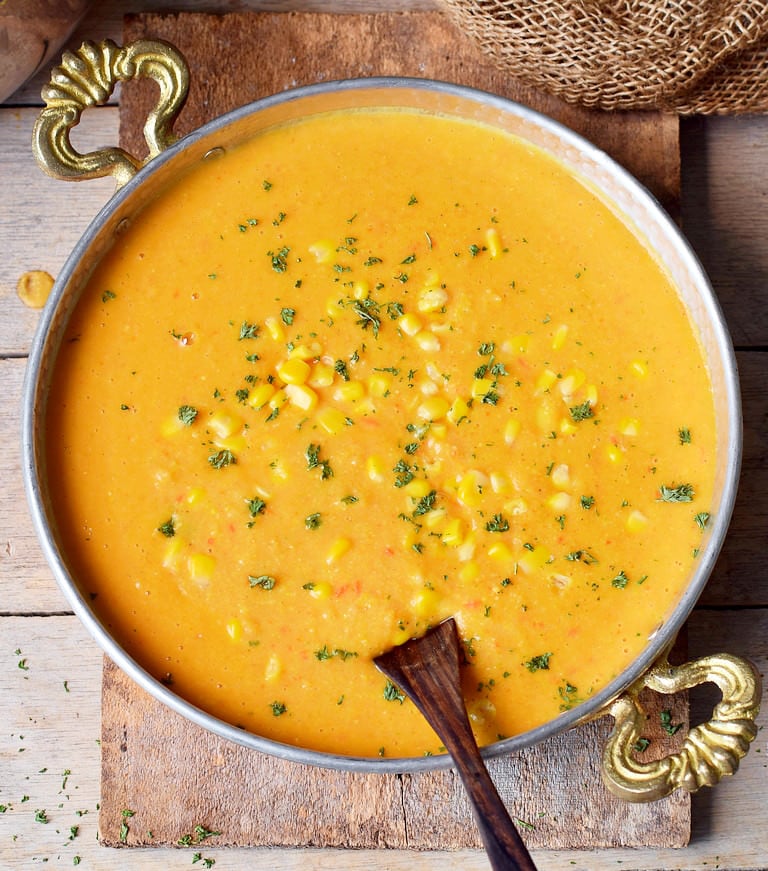 How To Make Vegan Corn Chowder?

Making this healthy potato corn chowder is really easy and can be done in one pot!

If you want to make this vegan corn chowder in a crockpot (slow cooker), here is how: I would recommend frying the garlic and veggies in a skillet for 3-5 minutes and then add all ingredients (except the coconut milk and the white beans) to the crockpot.

Simply cook for about 6 hours on low or about 3-4 hours on high until potatoes are tender. Then add the coconut milk and beans and blend with an immersion blender. 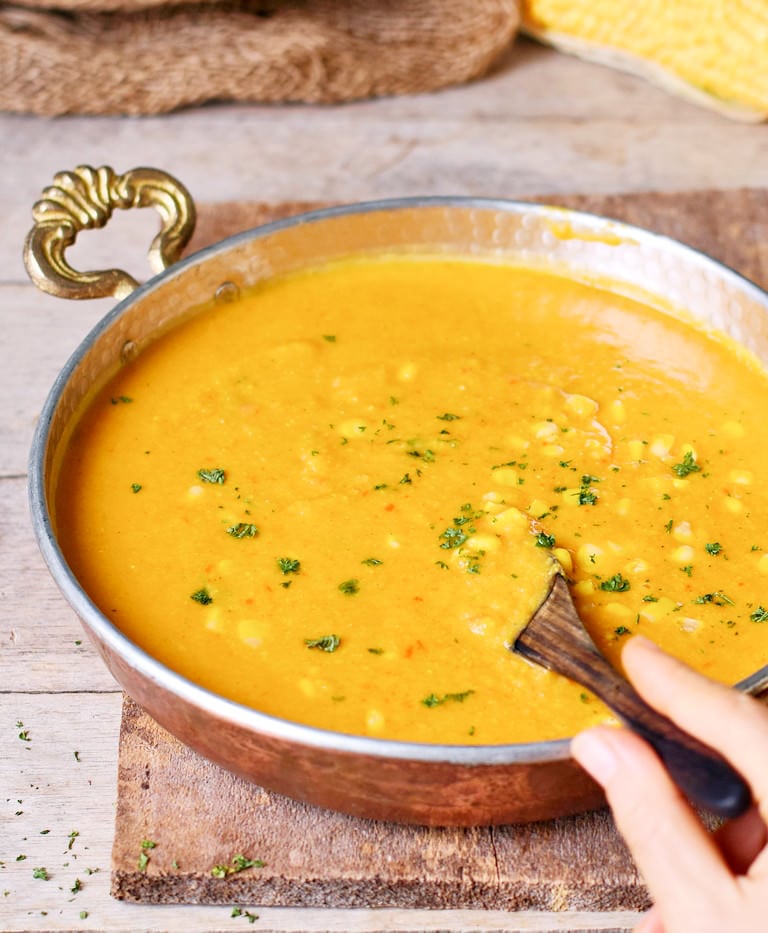 Can I Freeze Corn Chowder?

Corn chowders that contain milk (dairy) will not freeze well. So if you are a vegetarian and make this corn chowder with cow’s milk (instead of coconut milk) it might not be a good idea to freeze it.

My suggestion would be to either use coconut milk (which freezes better than dairy milk and is furthermore healthier and cruelty-free) or only add the dairy milk when you reheat the soup.

You can freeze this vegan corn chowder for up to 3 months. Thaw it completely before you heat it back up in a pot. 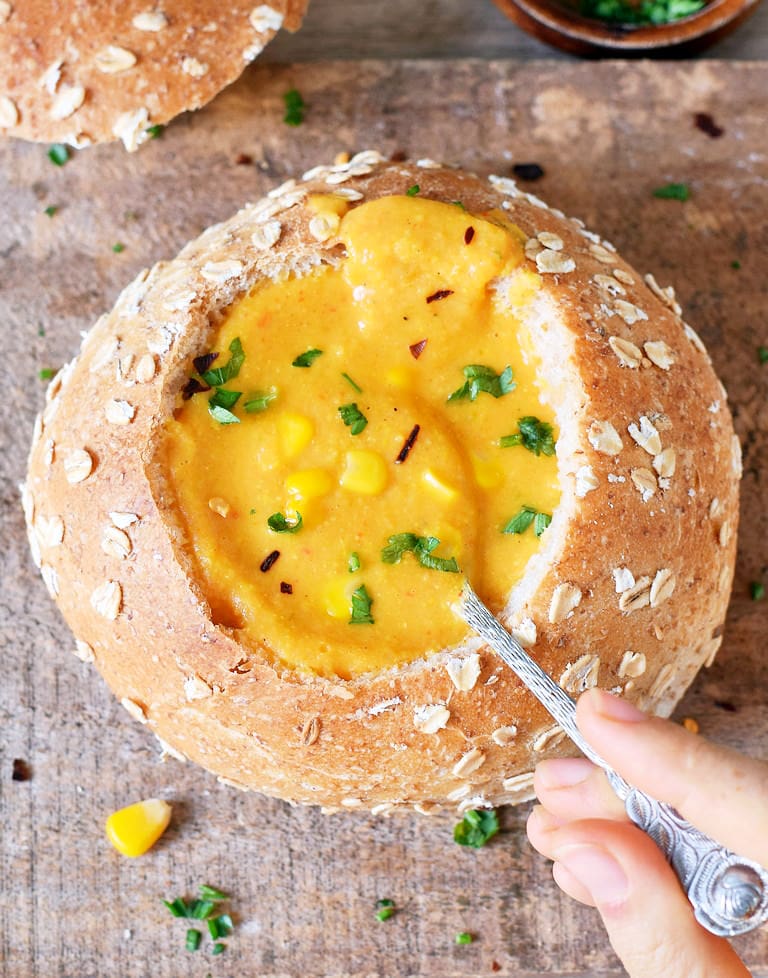 This Easy Corn Chowder Recipe Is: 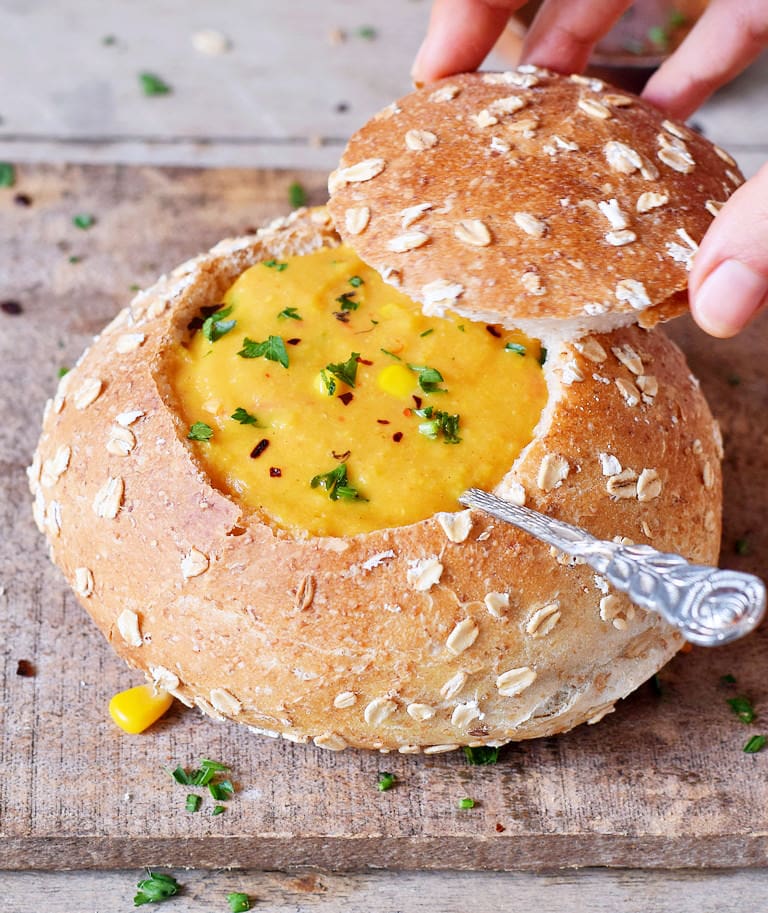 Ready In About 30 Minutes

I love quick and simple recipes and this easy corn chowder is definitely one of them. All you need is one pot, all the ingredients (which are available in any supermarket), and an immersion blender. If you don’t have an immersion blender, you could also use a regular blender. Please make sure to blend the soup in batches and to not overfill the container of the blender.

The soup is ready in about 30 minutes and the preparation takes just 10-15 minutes.

I once served the corn chowder in a bread bowl because it looks cute and is a great idea for a party! 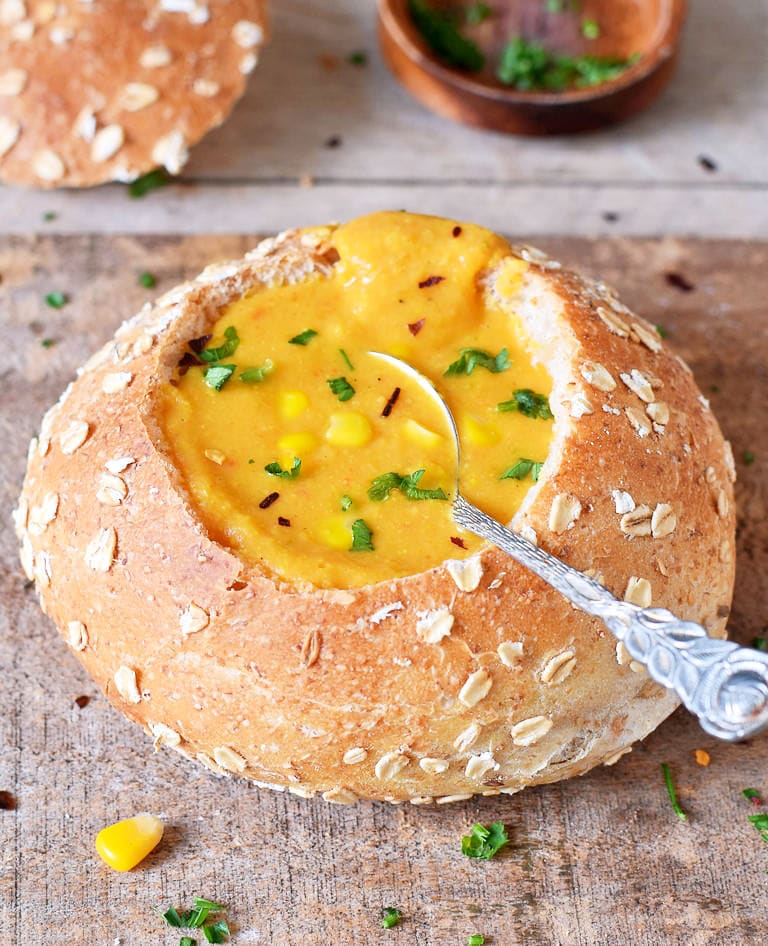 Should you recreate this creamy vegan corn chowder recipe, please leave a comment below and don’t forget to tag me in your Instagram or Facebook post with @elavegan and #elavegan because I love to see how your corn soup turned out!

And for more vegan soups, definitely also check out the following recipes: 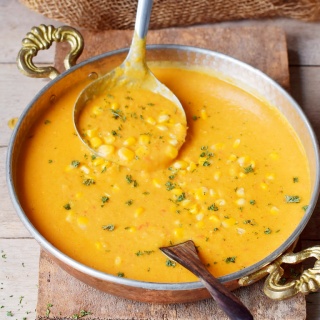 Author: Michaela Vais
This healthy vegan corn chowder is super creamy, rich, and comforting. The recipe is plant-based, gluten-free, low-fat, easy to make in one-pot. It's a great dinner or side for the summer months when fresh corn is in season. But it can be also made in the cooler months with frozen corn. This hearty thick soup tastes best when you serve it in a bread bowl!
4.90 from 19 votes
Print Recipe Pin Recipe
Prep Time 12 mins
Cook Time 18 mins
Total Time 30 mins
Course Soup
Cuisine American
Servings 4
Calories 354 kcal