These applesauce pancakes are topped with a fresh, warm cinnamon apple topping to satisfy all your cravings during the Fall-season or year-round! Best of all, this pancake recipe is egg-free, dairy-free, gluten-free, refined sugar-free, and 100% vegan! 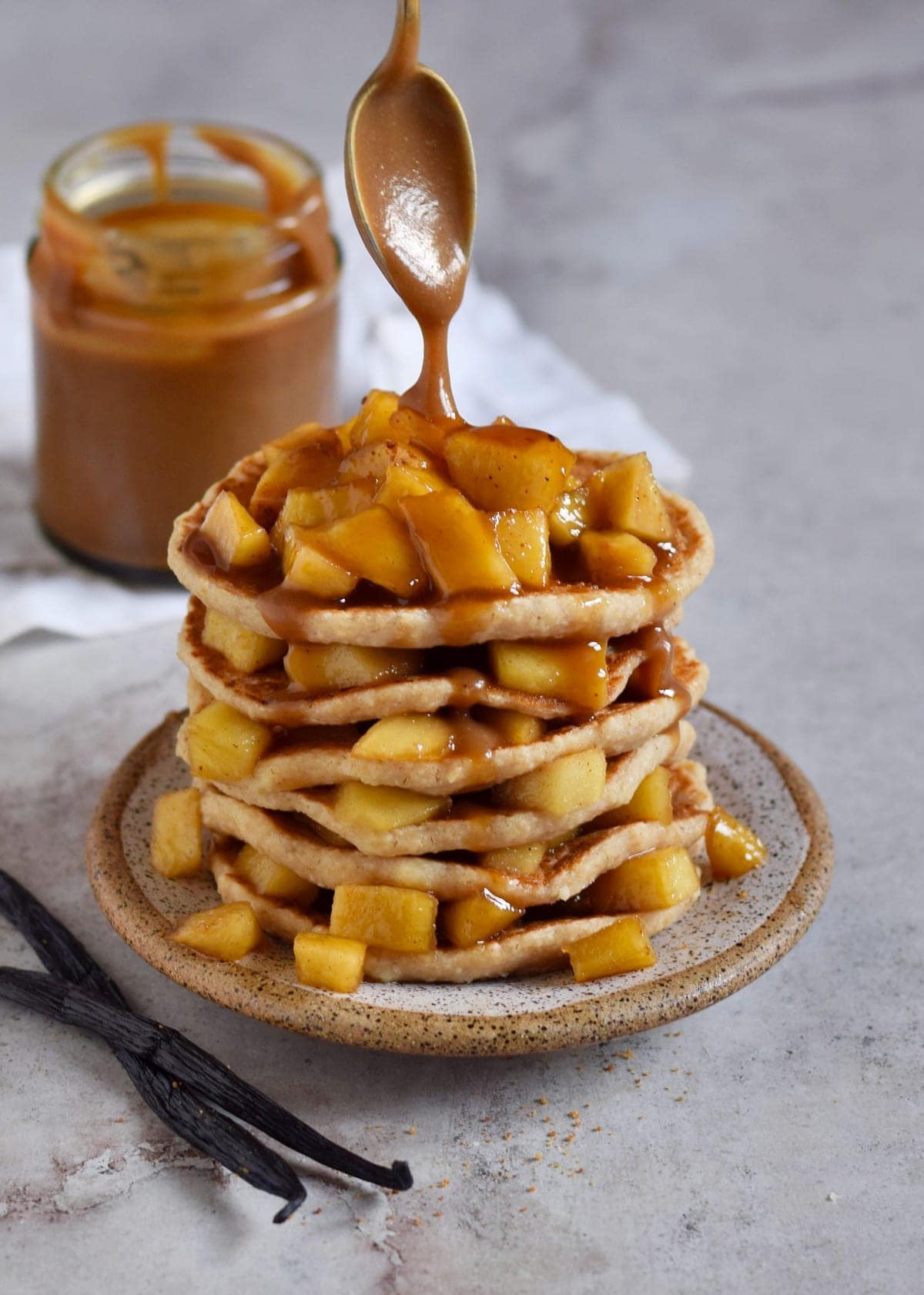 I know that cinnamon and apple are most often associated with Fall and the holidays, but when the combination tastes as good as these two do, and they’re available year-round, can you blame me? I’ve already shared recipes for apple cinnamon rolls, caramel apple cheesecake, apple strudel (Apfelstrudel), and apple muffins with a streusel topping – now it’s the turn of these apple cinnamon pancakes (aka Apfel Pfannkuchen)

In fact, this recipe was inspired by my apple and cinnamon crepes – this time pairing the delicious apple topping with fluffy American-style gluten-free pancakes. I mean, what’s better than a big stack of pancakes to start (or end) the day?!

This recipe is made up of mostly pantry staples, and your kitchen will smell amazing when preparing this dish. It tastes like apple pie but healthier– I mean, who doesn’t want apple pie for breakfast? 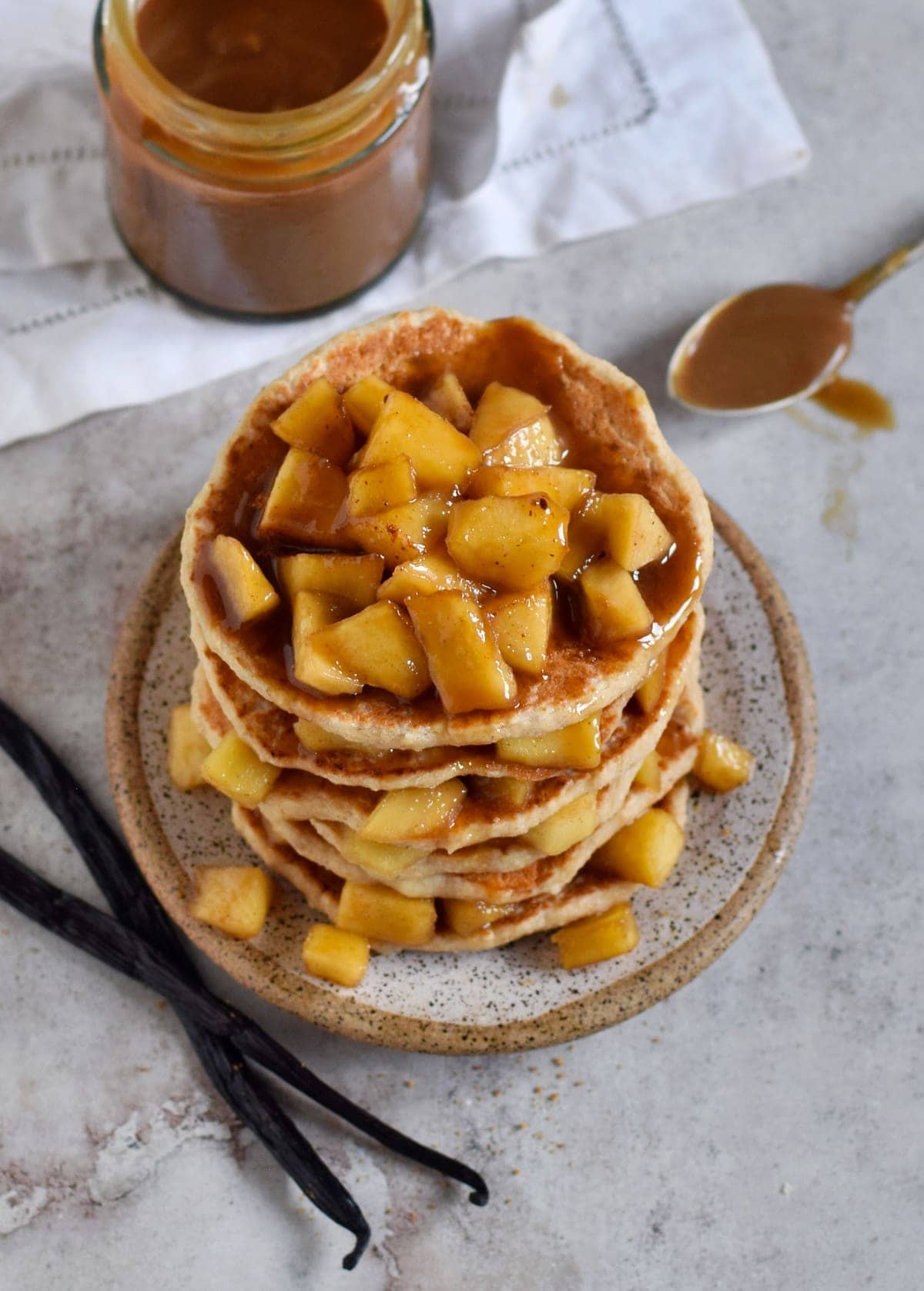 The Ingredients and Substitutions

You could optionally add a little vanilla to the vegan pancakes batter, too. 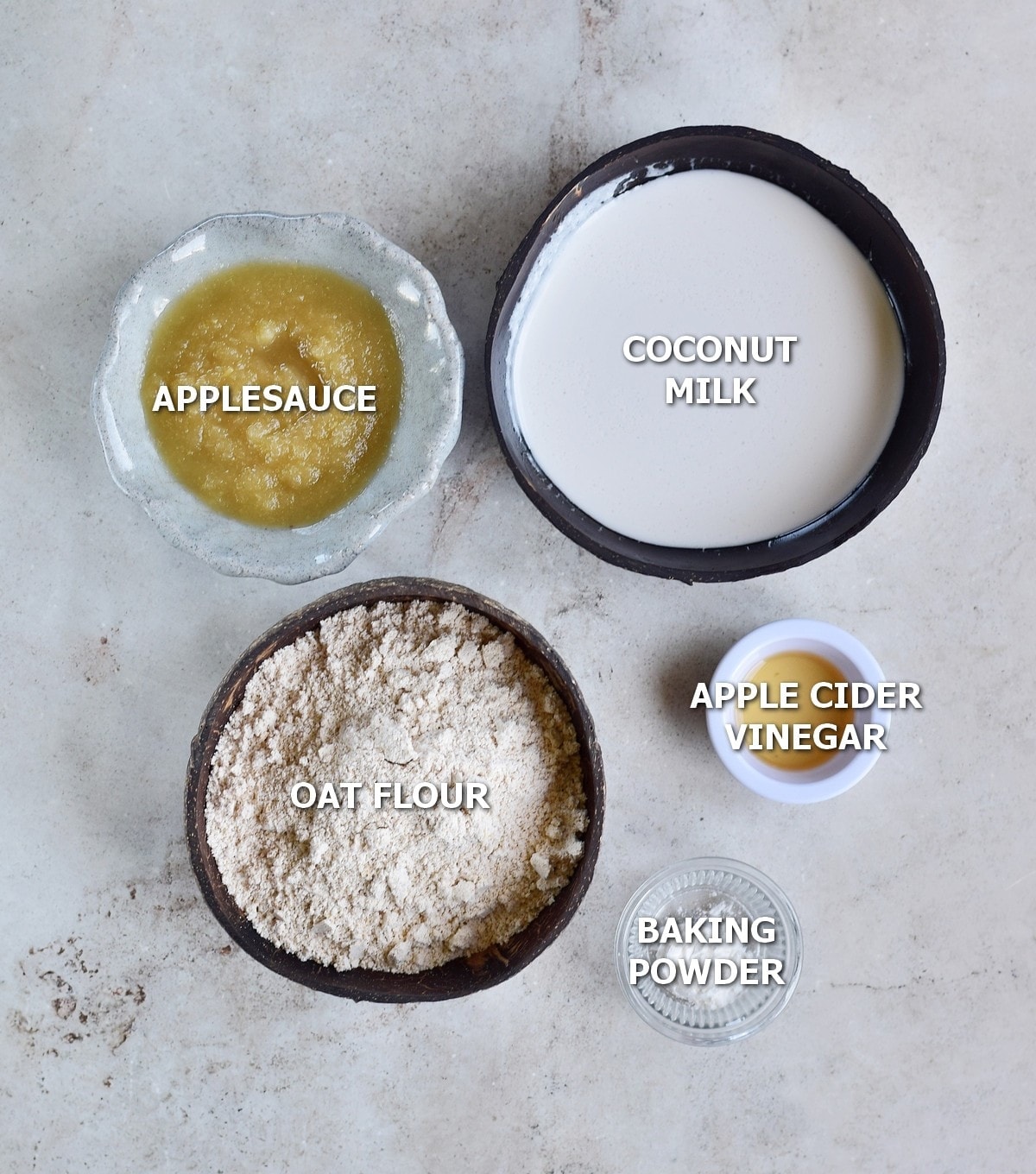 For the full ingredients list, measurements, complete recipe method, and nutritional information for these caramel apple pancakes, please read the recipe card below. 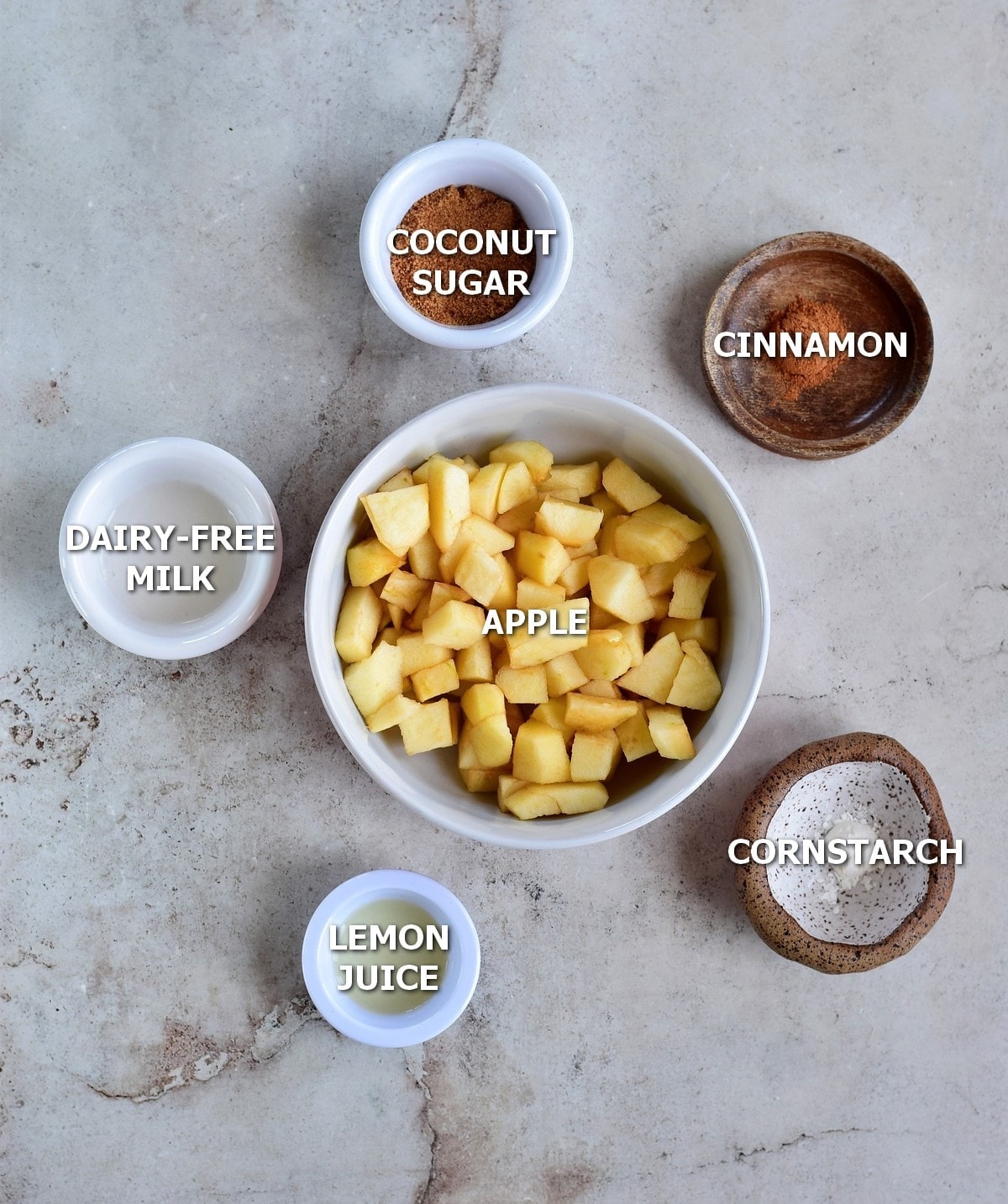 How to Make Apple Cinnamon Pancakes 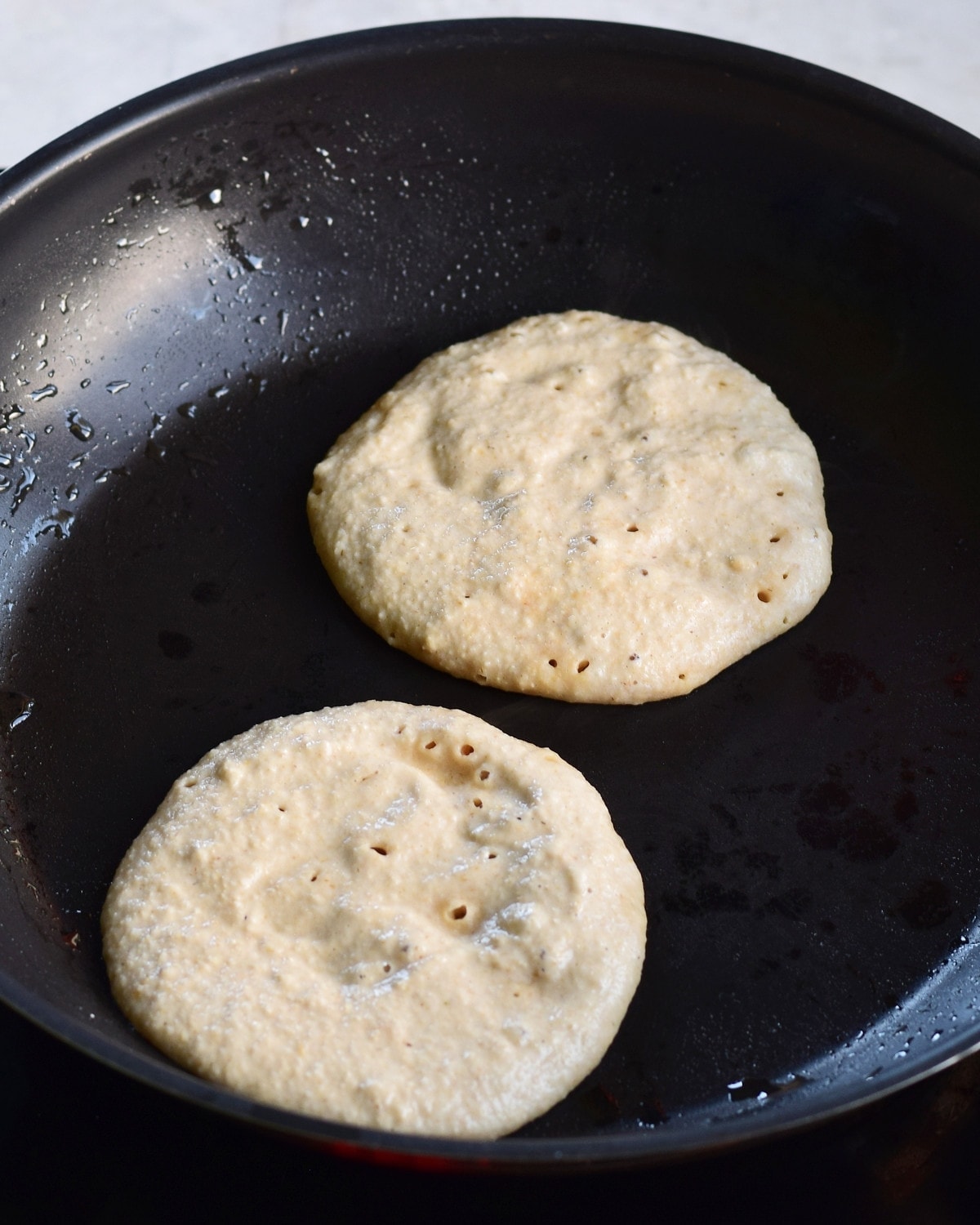 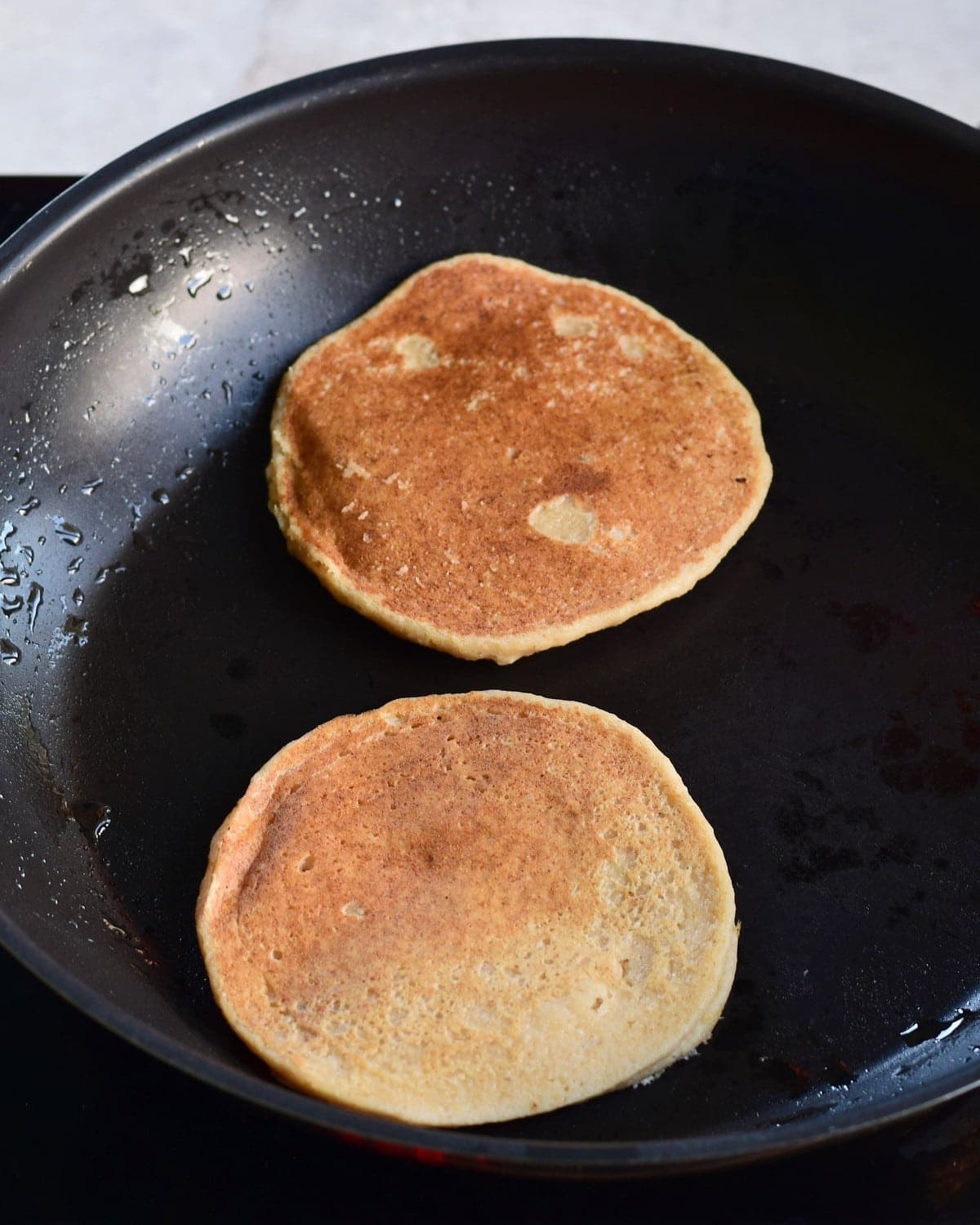 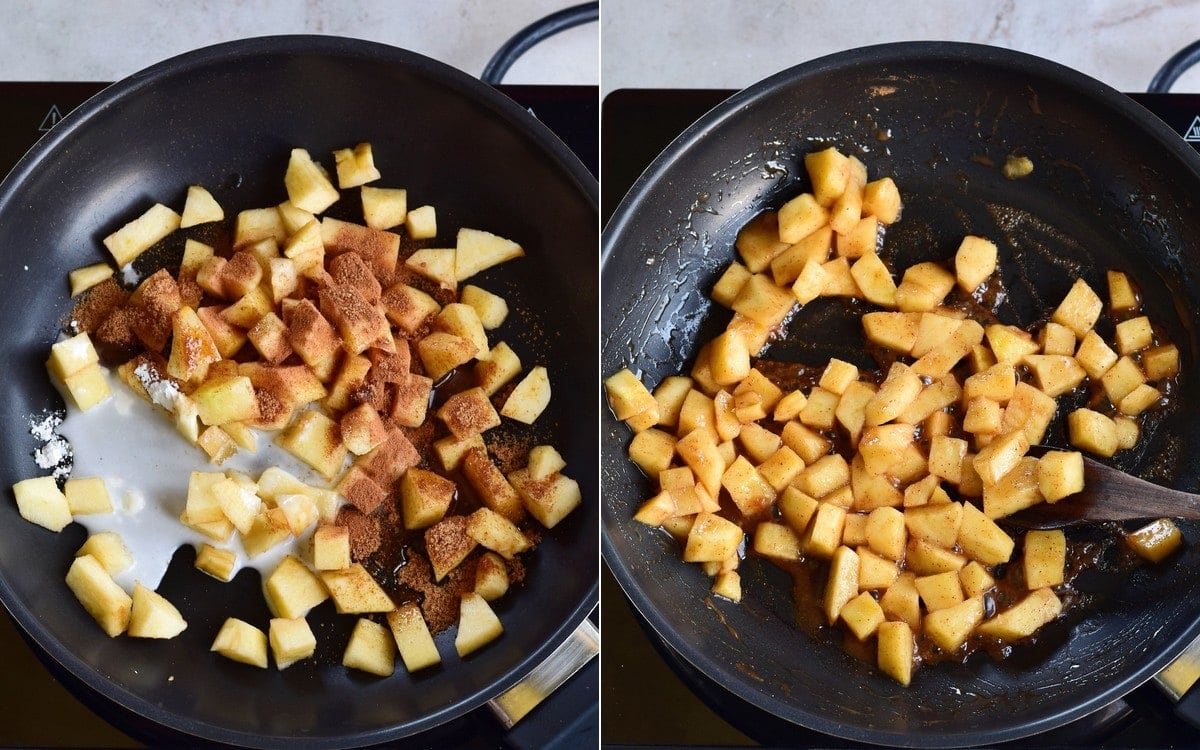 If the mixture gets too thick, then add a little more plant-based milk. Give the apple mixture a taste and adjust any ingredients as needed (sugar for more sweetness, cinnamon, lemon for tang, etc.) 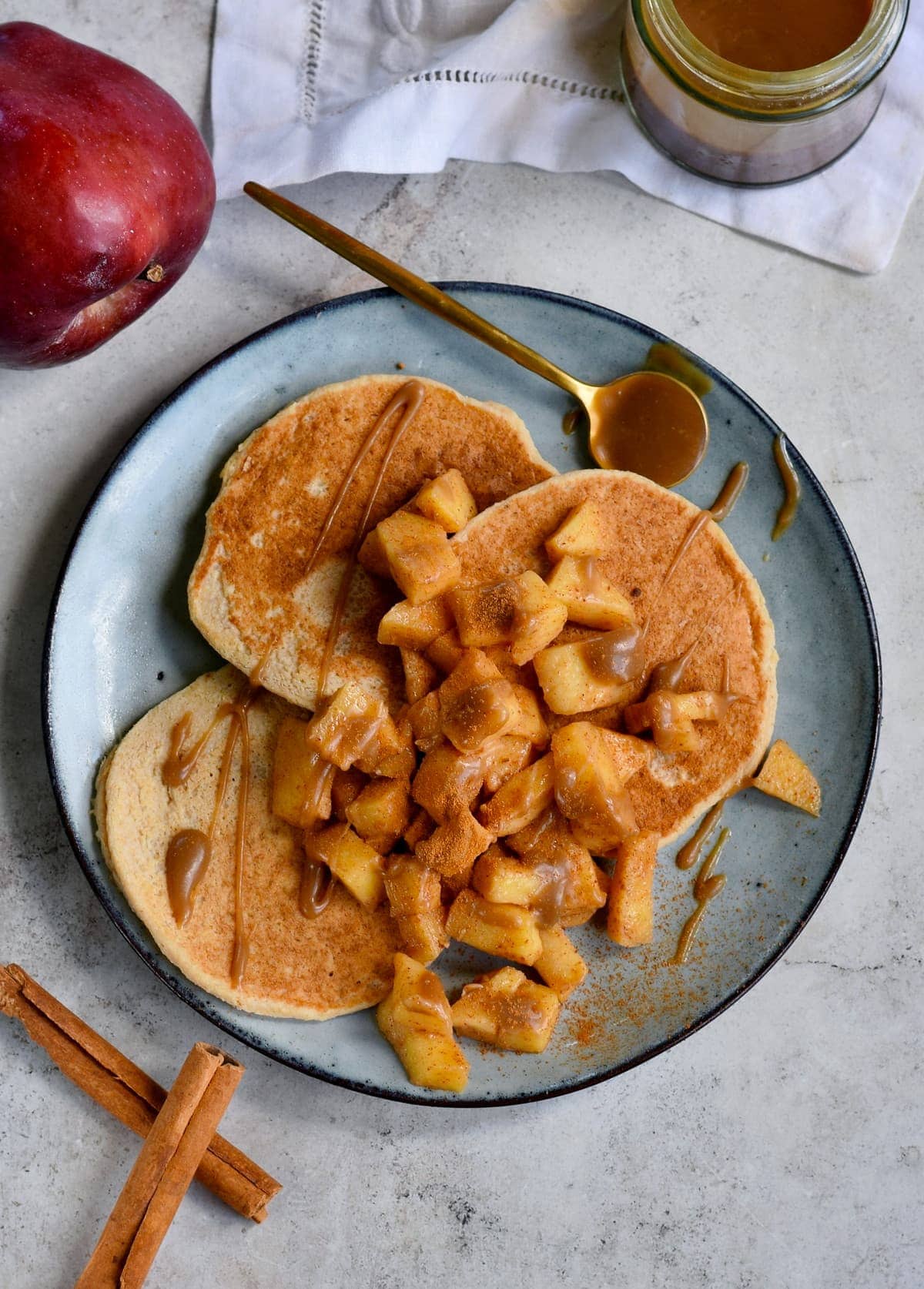 How to Serve the Apple Pancakes?

Serve these healthy pancakes up for breakfast alone or with a drizzle of vegan caramel sauce and optionally some crushed nuts (walnuts, pecans, etc.). Alternatively, for dessert, you could add either coconut whipped cream or a scoop of ice cream; vanilla, caramel, chocolate, or even peanut butter would taste lovely.

Are you serving a large crowd? Increase your offerings with blueberry sheet pan pancakes and/or baked banana oatmeal, which can cook in the oven while you prepare these apple cinnamon pancakes! 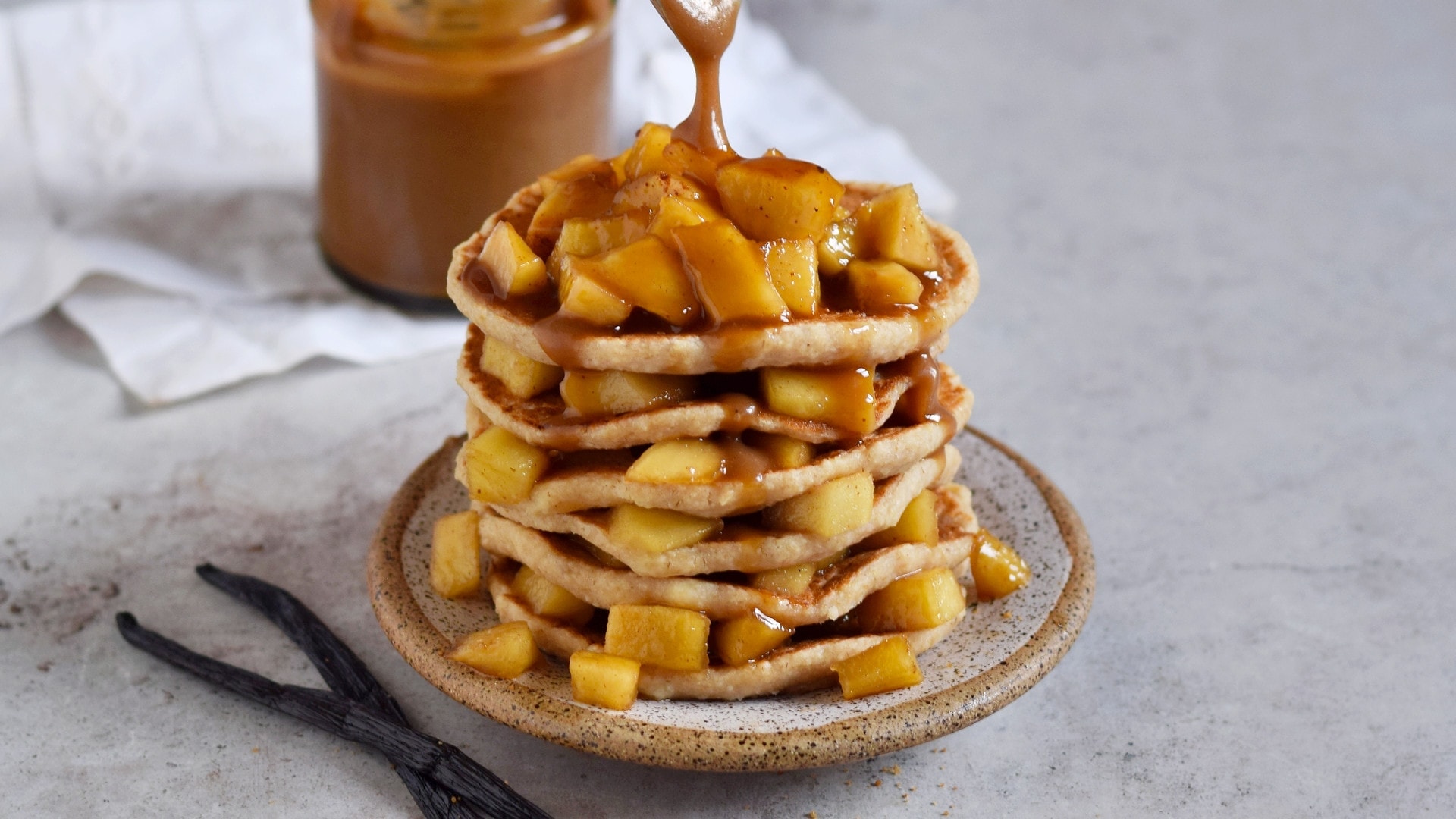 How to Make Ahead and Store?

To Store: Store the cooked pancakes in an airtight container/bag in the refrigerator for 3-4 days or 3-4 months in the freezer. The topping can also be stored in the fridge for 3-4 days, though I don’t recommend freezing it as the texture can become watery and mushy. 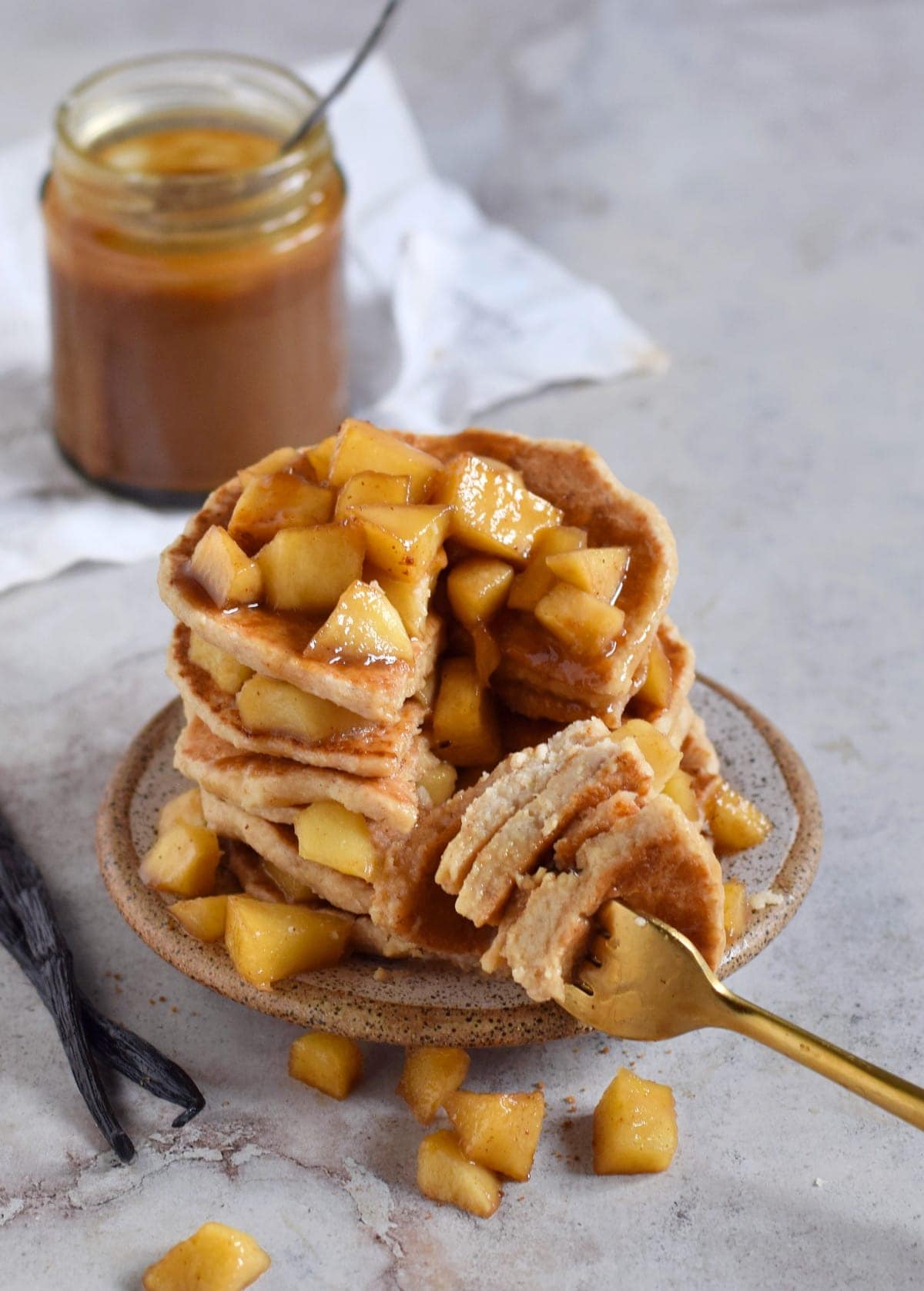 Can I make the apple cinnamon pancakes sugar-free?

Yes, feel free to substitute any of the sugar mentioned in the recipe for your sugar-free sweetener of choice – such as erythritol or stevia. Just make sure to adjust the amount as the sweetness will vary.

Can I use a food processor for the batter?

There’s no need to, as the pancake batter is so easy to mix by hand. However, there’s no reason why you couldn’t use a food processor to mix the batter as it’s gluten-free (so it won’t impact the texture).

What is the best apple to use for apple topping?

Just like when making apple crisp, it’s best to use a good baking/cooking apple as softer apples will cook down into more of a ‘fluff’ rather than maintain shape. I recommend choosing an apple like Gala, Honeycrisp, Braeburn, or Granny Smith. 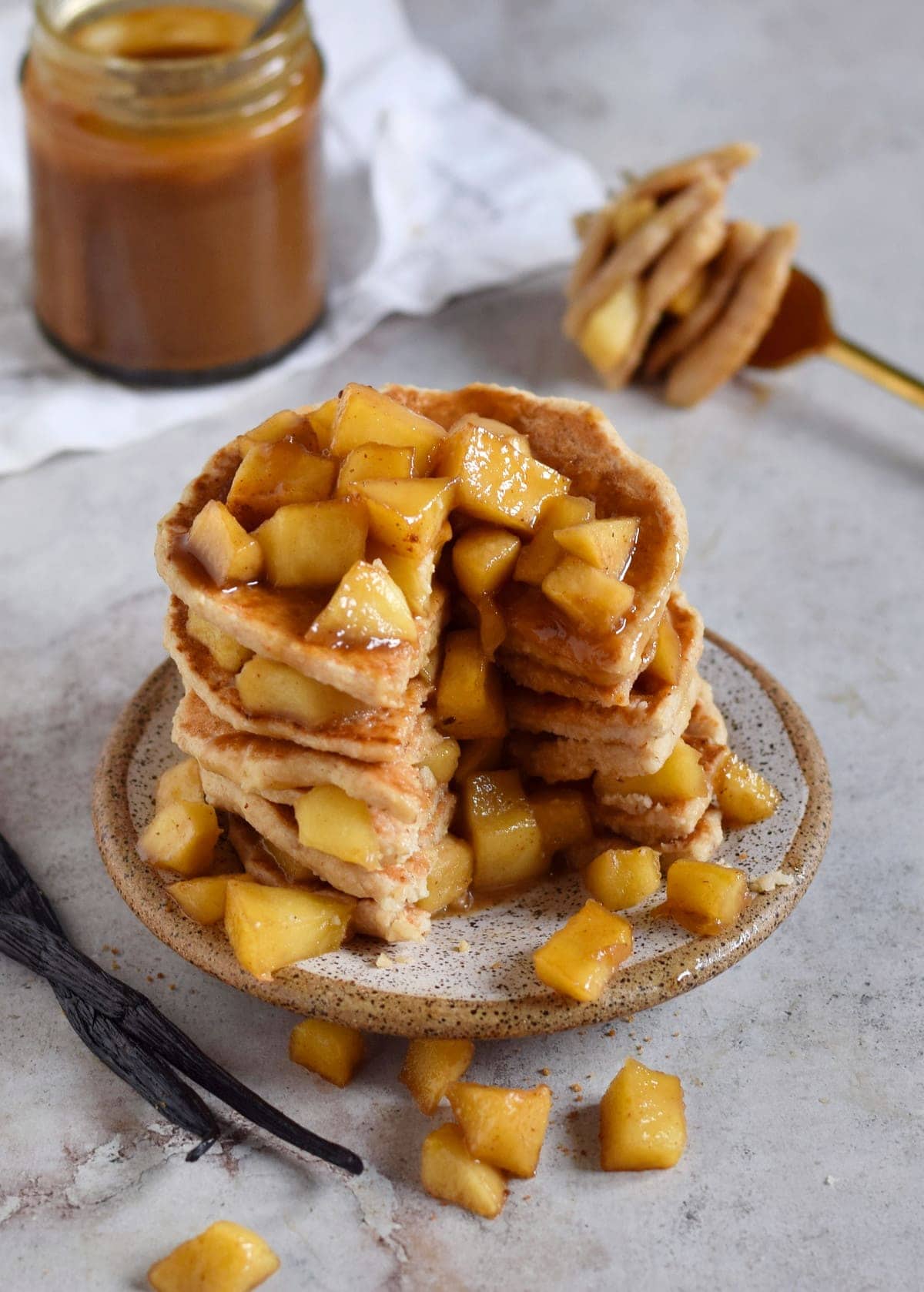 If you try this recipe for apple cinnamon pancakes, I’d love a comment and ★★★★★ recipe rating below. Also, please don’t forget to tag me in re-creations on Instagram or Facebook with @elavegan and #elavegan – I love seeing them. 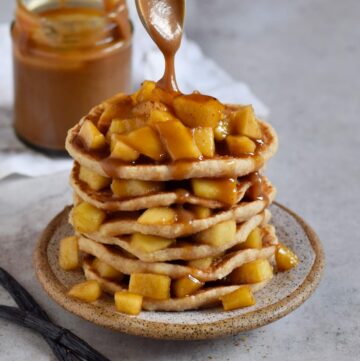 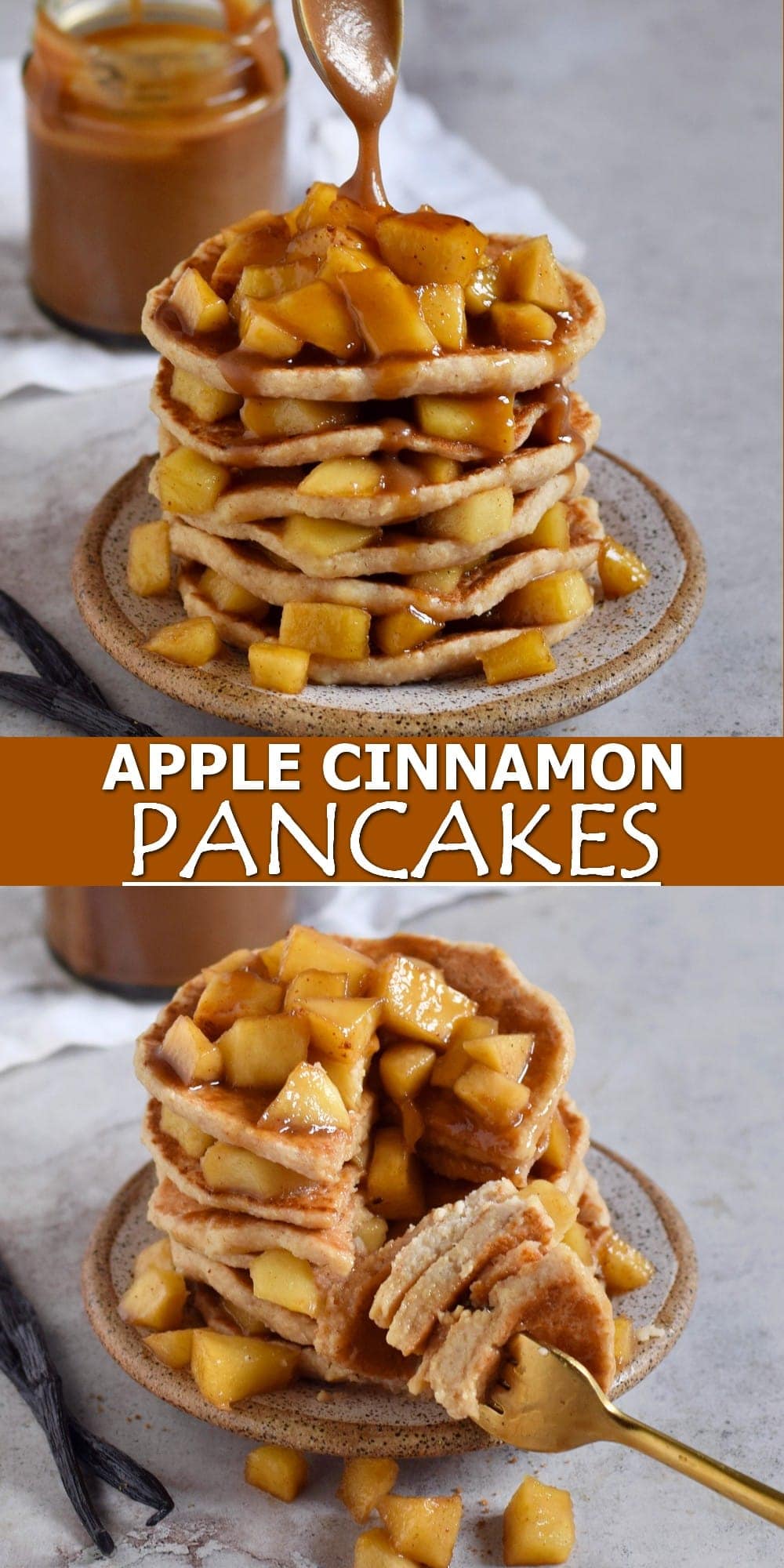 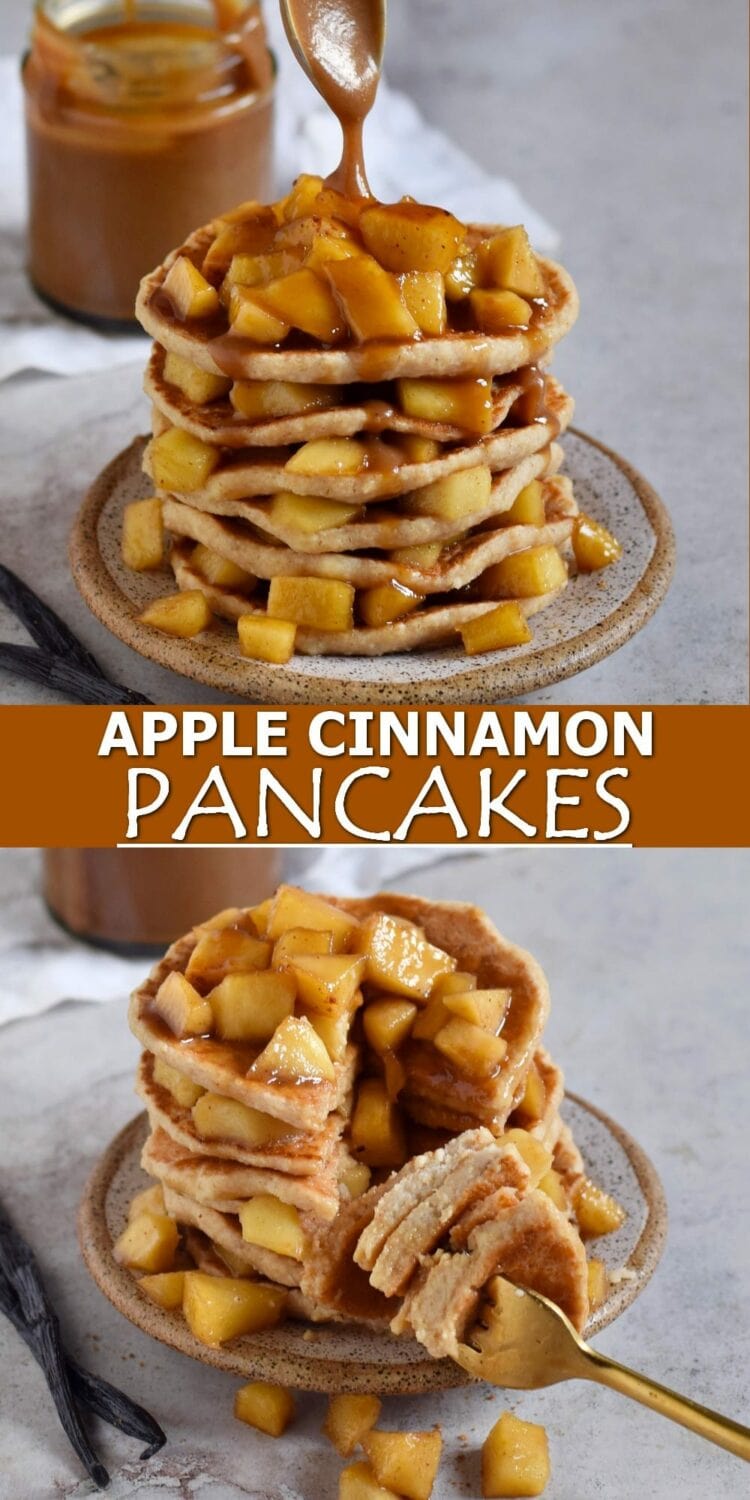