These delicious German potato dumplings (Kartoffelkloesse) are amazing when served alongside rich gravy and in place of mashed potato with tons of dishes. This recipe uses just 4 ingredients and five steps to delicious potato dumplings every time. Plus, this recipe is gluten-free and vegan! 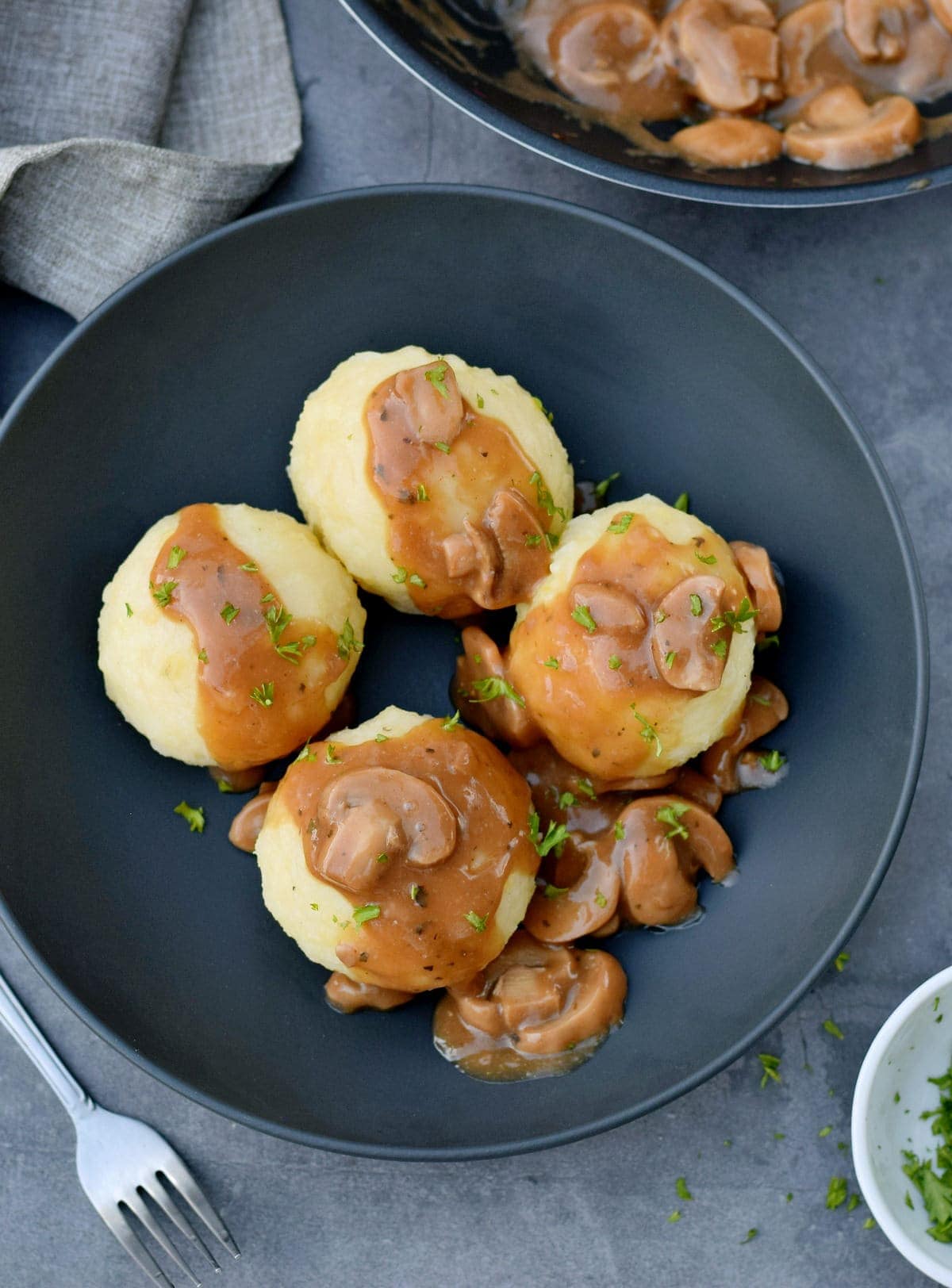 Right now, I’m completely and utterly in the mood for comfort food and good classics from my childhood. These German potato dumplings (also referred to as Kartoffelklöße, and/or Kartoffelknödel – though English speakers often refer to them as Knoedel or Kloesse) are extremely common in Germany.

They can be served alongside many dishes but are especially popular with Sunday roasts and at Christmastime, along with cooked red cabbage (Rotkraut) and meatloaf (Sauerbraten). Luckily, they’re no less delicious when served as part of a meat-free, vegan meal topped with tons of gravy!

However, even though this post is inspired by German-style potato dumplings, similar versions of this dish are made throughout Europe. This includes Poland, where they’re called ‘Kopytka’ and are similar in shape to gnocchi, and Hungary.

In fact, my family is from the Czech Republic, where this dish is also popular and called “bramborové knedlíky.” There, we made them in a log shape, like a baguette, and then sliced.

Let me know in the comments if your own country has a similar dish that I haven’t mentioned. 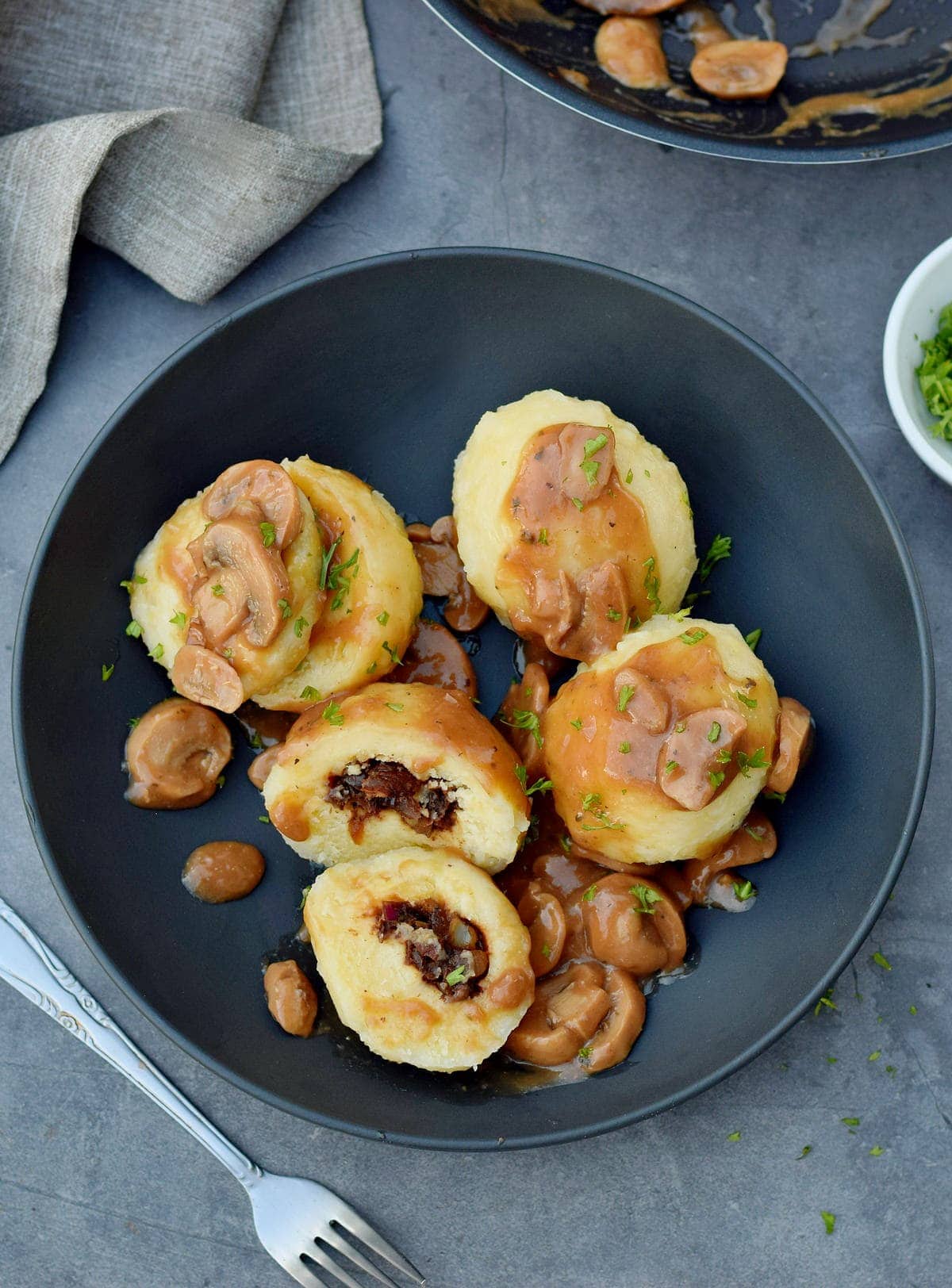 What are Potato Dumplings?

All the above being said, if you’re not already aware of this popular side dish, you may be wondering what they are.

As stated, there are many versions of this dish across Germany (in fact, there are many types of dumplings, in general, in Germany!). Some are made up almost entirely of potato, whereas others include extras such as bread, flour, starch, and even eggs. There are also generally a few different versions of preparing the potatoes for these dumplings, including using 100% boiled potatoes, using raw potatoes, or using a 50/50 blend. I’ve used a 100% boiled potato version, combining potato, starch, salt, and nutmeg for a simple but delicious potato dumpling.

For this recipe, the potato dough is formed into balls and then cooked in salted water with results that are similar to, yet not precisely, like fresh potato gnocchi yet softer and fluffier.

You can also stuff the dumplings in various ways – though this isn’t as common. I like to stuff them with a mixture of mushrooms, onions, and garlic! 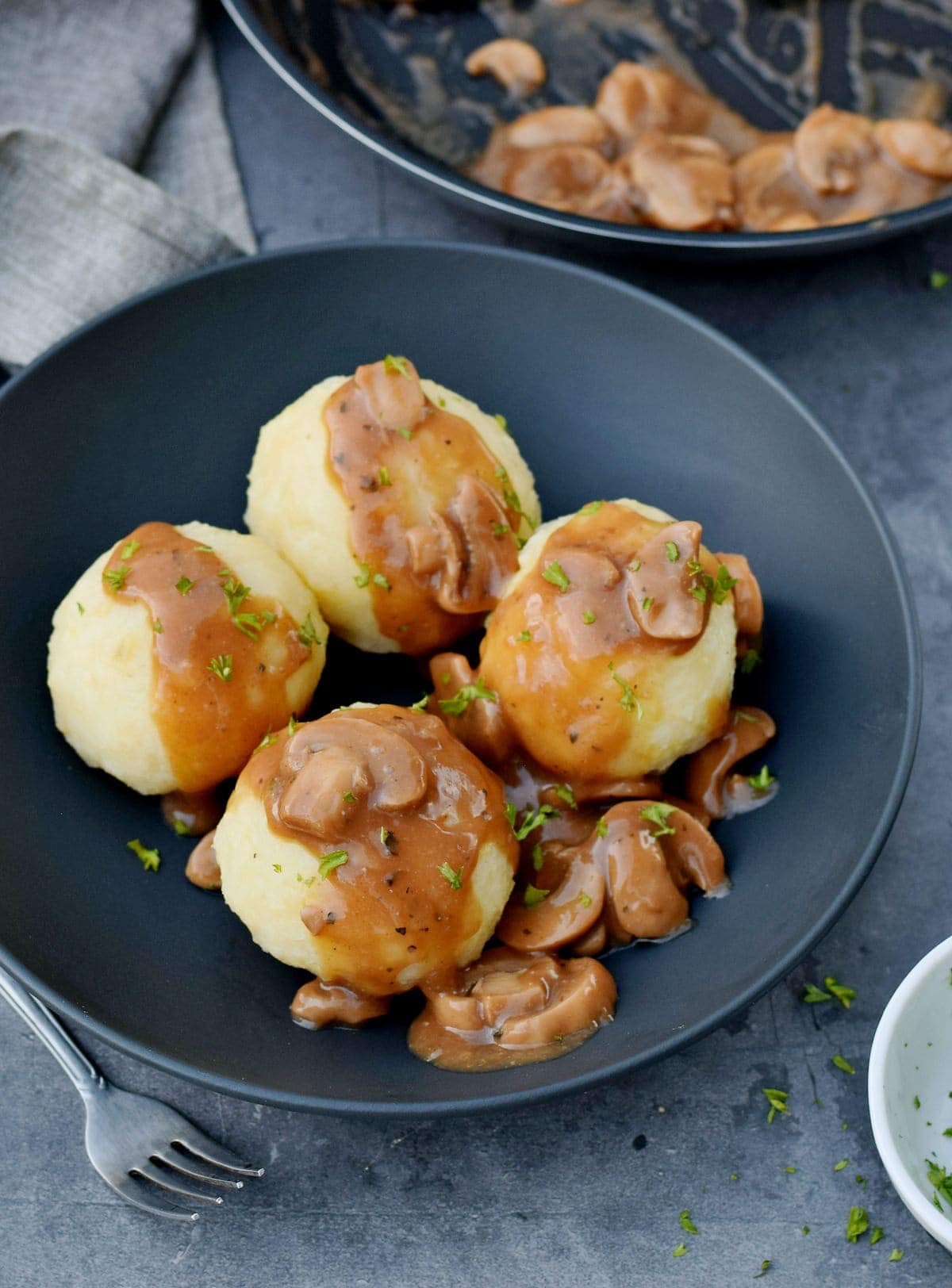 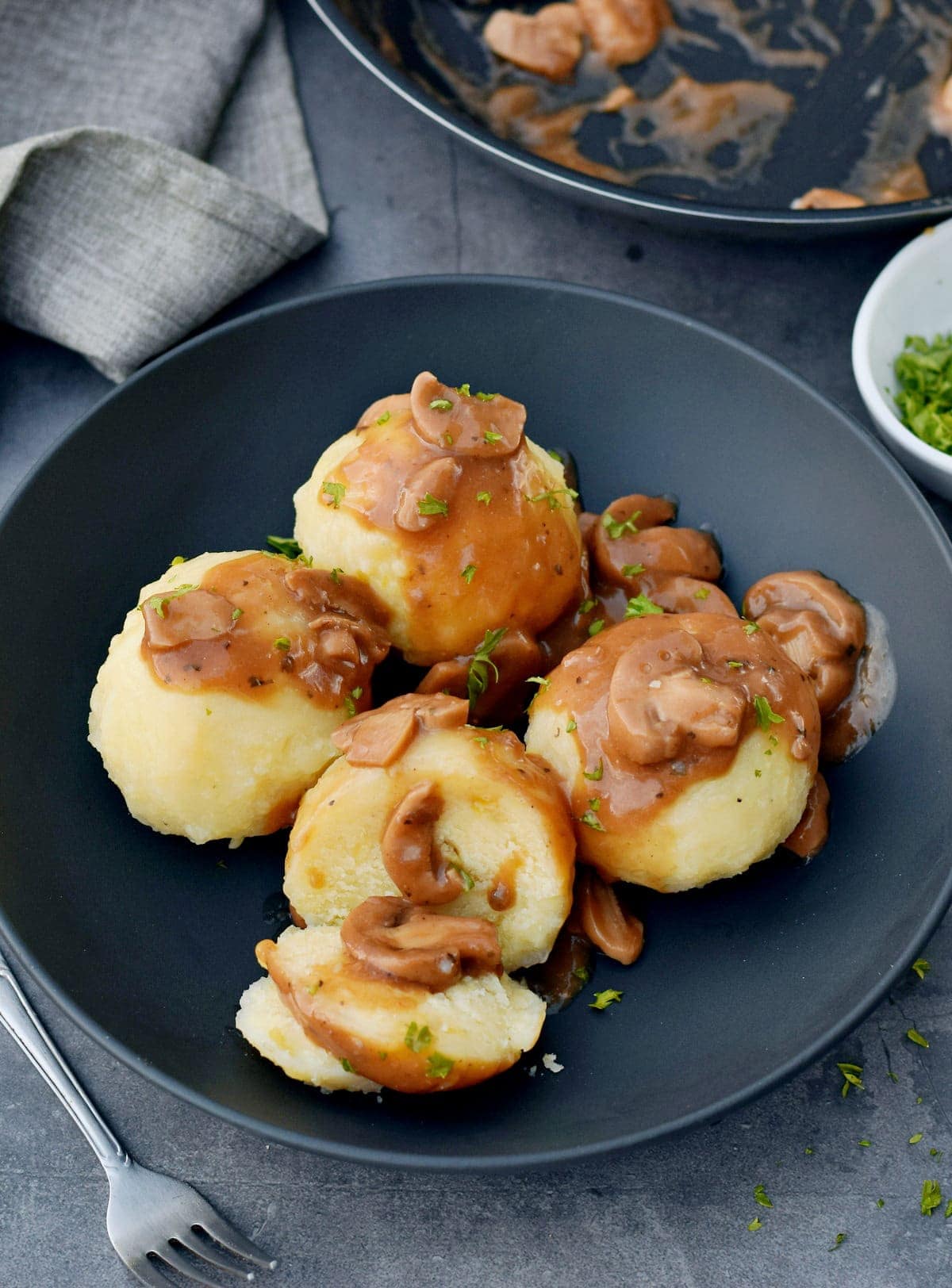 How To Make Potato Dumplings – Step-By-Step

For the full ingredients list, ingredient measurements, and nutritional information, then please read the recipe card below.

Step 1. Begin by cooking the potatoes whole with the skin on, in a large pot with boiling water until fork tender.

Step 2. Allow the potatoes to cool slightly and then peel the potatoes (I had 750g of potato, once cooked and peeled. Then mash the potatoes with a potato masher or ricer.

Step 3. Add the potato starch, salt, and nutmeg. Then use your hands to knead the mixture into a smooth dough. Meanwhile, bring a large pot of salted water to a gentle simmer (never allow it to boil).

Step 4. Wet your hands with a little water (this will stop the dough from sticking to your hands), then divide the dough into 6-8 portions and shape into potato balls. You can add a filling, but this step is optional! I only filled two and left the others unfilled.

Step 5. Reduce the heat of the pot – it needs to be hot but not boiling (this is very important!). Then carefully add the dumplings to the pot and allow them to cook for 15 minutes. They usually tend to sink initially and then rise to the surface when ready (though they can emerge before cooked through, so I always cook for 15 minutes).

Step 6. Once ready, remove them from the water with a slotted spoon, serve, and enjoy!

As I mentioned above, there are tons of ways to add these German potato dumplings to your meals. Traditionally, they are served with lashings of gravy, meat, and often red cabbage or Sauerkraut.

However, you can also use these in place of mashed potatoes or roast potatoes in tons of meals.

Personally, I love to serve them alongside Vegan Meatloaf and this Flavorful Vegan Gravy. Even better if you pile your plate high with extra green veggies like broccoli, green beans, or peas. 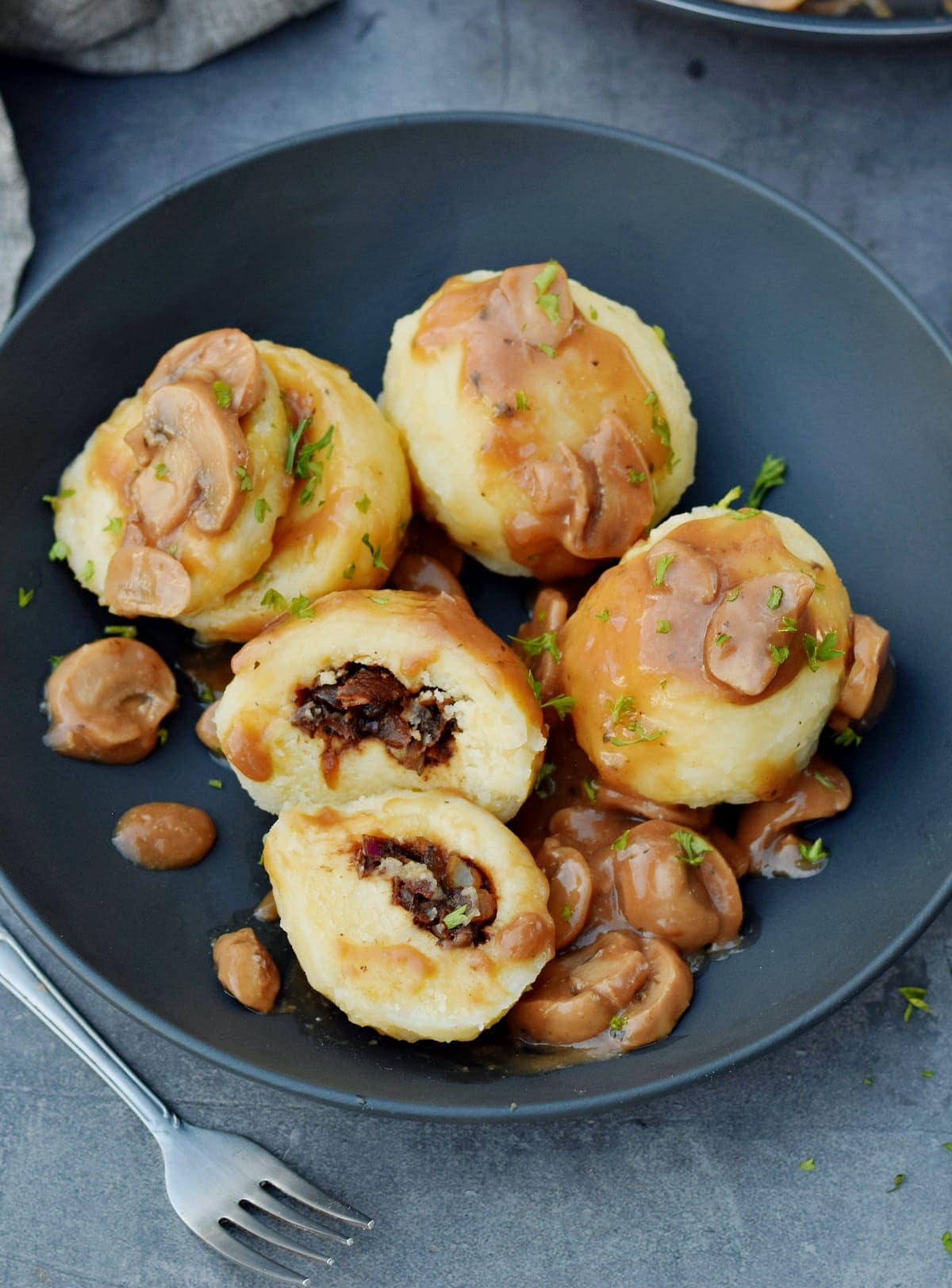 You can eat these dumplings immediately, while warm, or leave leftovers to chill in the fridge overnight and then slice and fry in vegan butter the following day, like gnocchi (then serve with more gravy!).

You can also freeze any extra cooked mashed potato dumplings for around 2 months by first cutting them in half, then placing them on a parchment paper-lined tray (not touching). Once frozen, you can transfer them to an airtight container.

You can then steam them from frozen or reheat either in a frying pan or microwave. 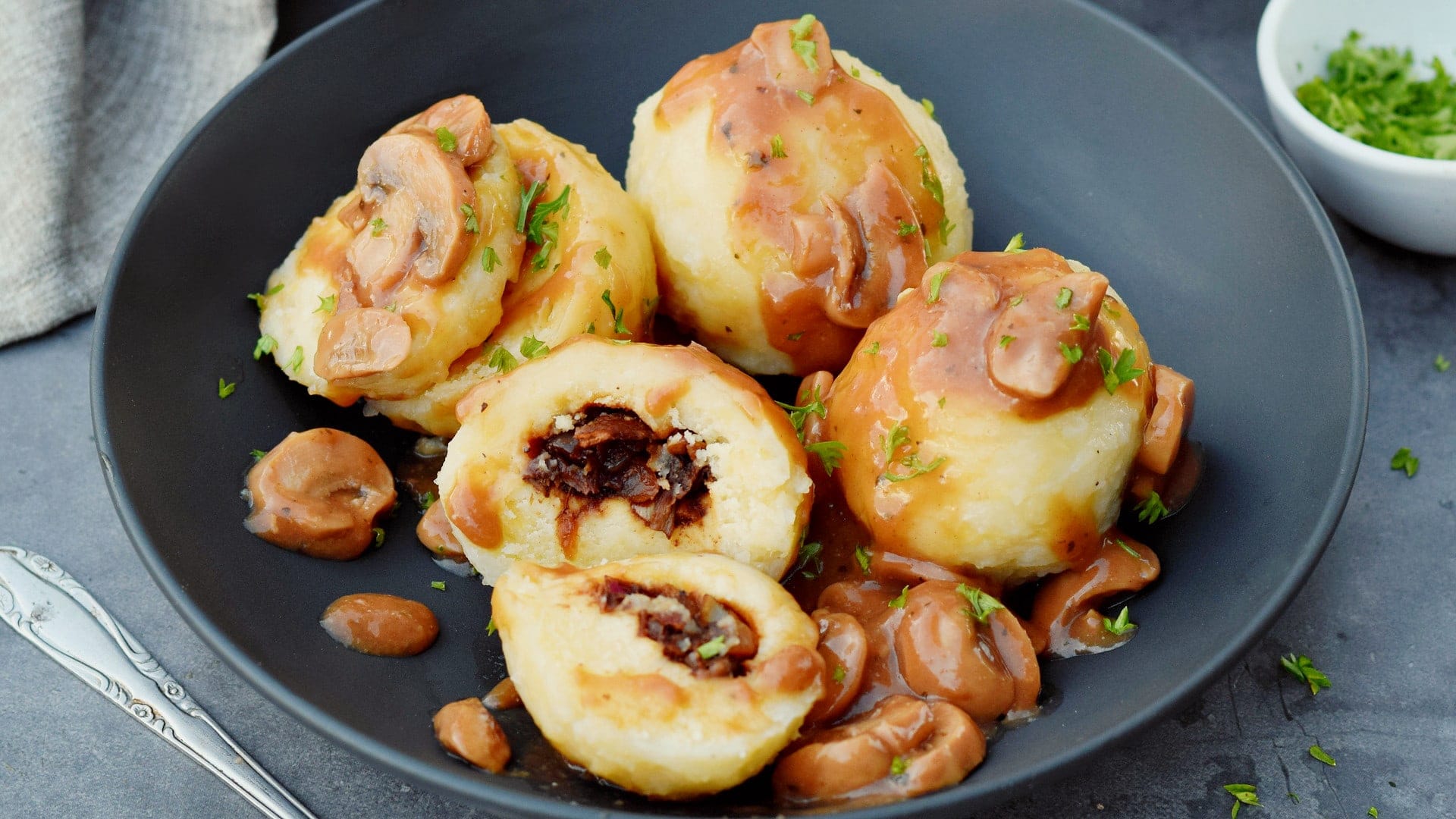 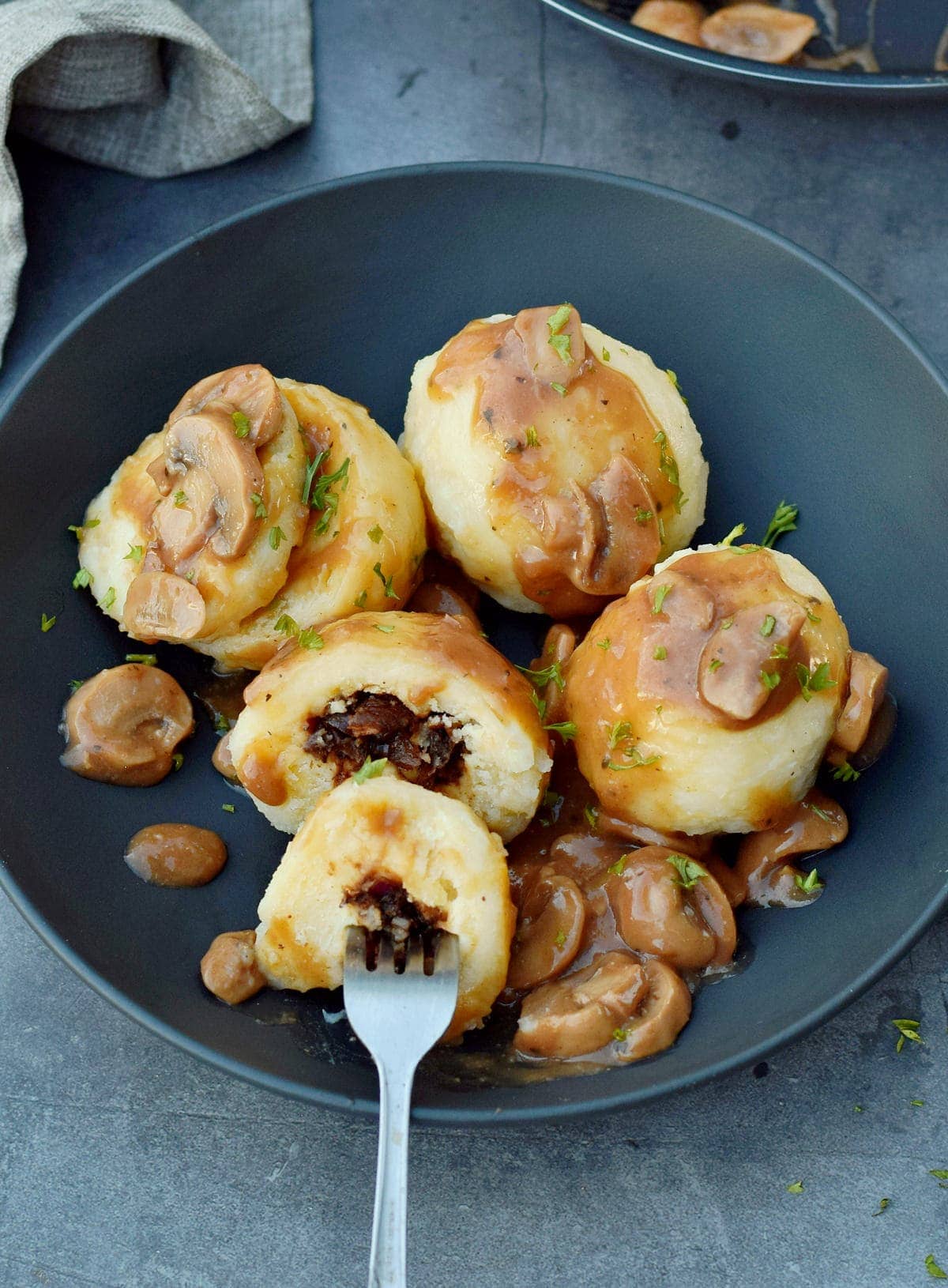 If you give this potato dumpling recipe a try, I’d love a comment and recipe rating below. Also, don’t forget to tag me in re-creations on Instagram or Facebook with @elavegan and #elavegan – I love seeing your recreations. 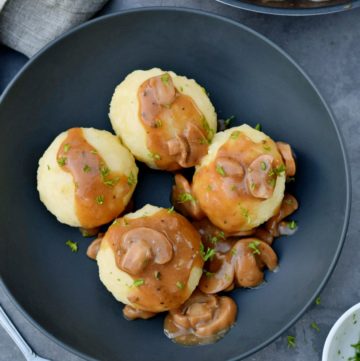 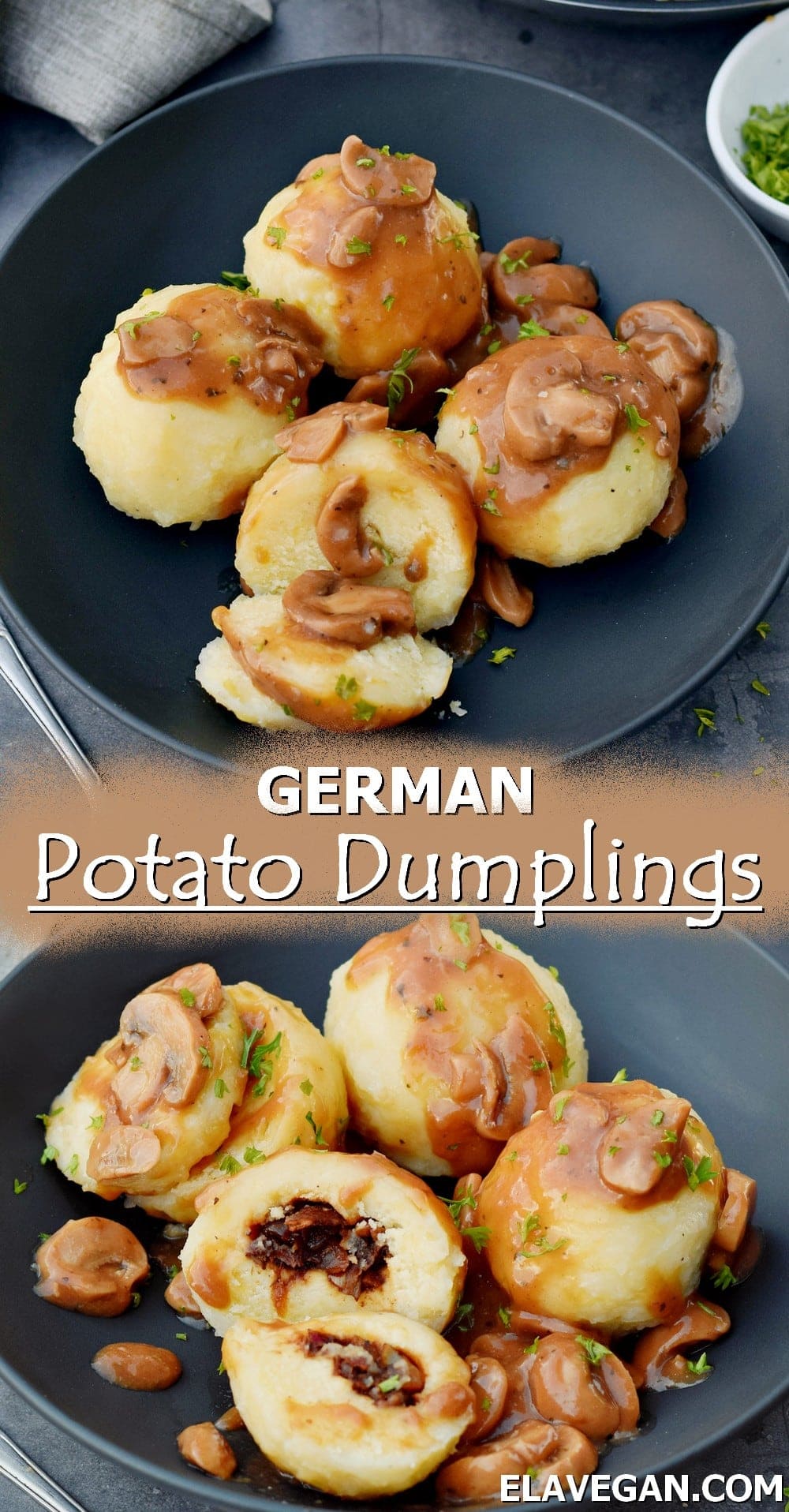 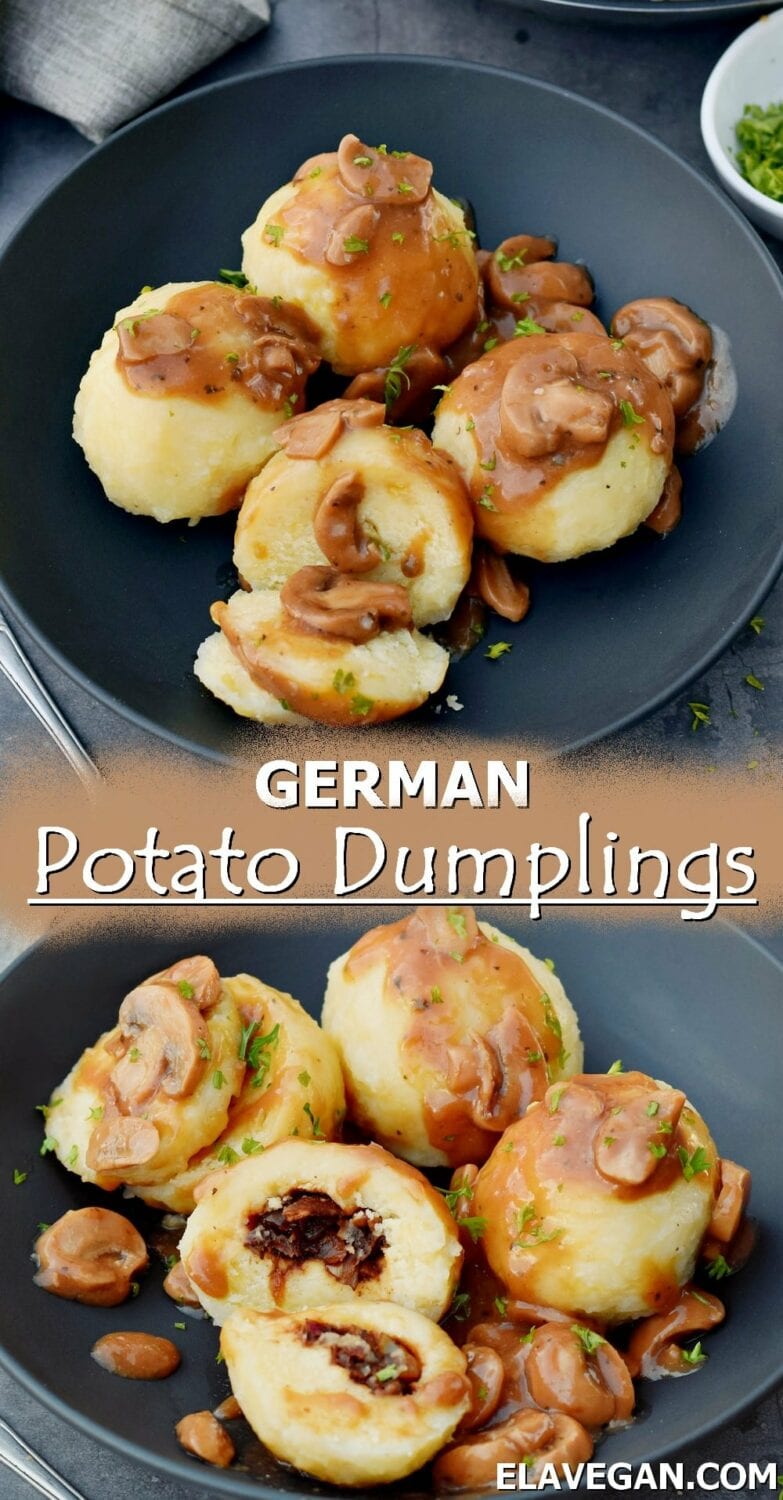